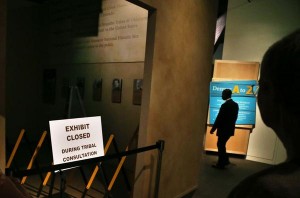 (Reuters) – Four descendants of Arapaho and Cheyenne Indians slaughtered in 1864 by U.S. federal troops in Colorado sued the federal government on Thursday for reparations over what became known as the Sand Creek Massacre.

The lawsuit filed in U.S. District Court in Denver accuses federal authorities of reneging on an 1866 promise to compensate victims of the massacre, and is demanding an accounting for the money that was set aside to pay the claims.

The Sand Creek Massacre, which took place when Colorado was a U.S. territory still 12 years away from statehood, was one of many skirmishes in the 19th century Indian Wars as white settlers expanded westward.

The suit says the U.S. federal government is responsible for an army that “committed acts of genocide, torture, mutilation, harassment and intimidation” against Indians who were camped along the Colorado creek when they were attacked without provocation, the lawsuit said

A spokesman for the Interior Department could not immediately be reached for comment.

At dawn on the morning of the massacre on November 29, 1864, about 700 U.S. cavalry troops, commanded by Colonel John Chivington, descended on an encampment of some 500 Cheyenne and Arapaho Indians along the Sand Creek near Fort Lyon, Colorado.

The Indians at Sand Creek were non-combatants in the Indian Wars and were led to believe under the terms of the 1861 Treaty of Fort Wise that they were in a safe haven. Nevertheless, cavalry troops opened fire with “artillery and 12-pound mountain howitzers,” according to the lawsuit.

An elderly Cheyenne Chief, White Antelope, ran toward the troops and crossed his arms, signifying that the villagers did not want to fight.

He was shot dead, and the “plaintiffs still have the bullet hole-riddled blanket” the chief wore when he was gunned down, the lawsuit said. An estimated 165 Indians – many unarmed women, children and the elderly – were killed over the next several hours.

The massacre grounds are now a National Historic Site operated by the National Park Service.

The federal government conducted an investigation and promised to pay reparations to the survivors under the Treaty of Little Arkansas but never made good on the promise, the lawsuit claims.

“The DOI (Department of the Interior) is believed to have since 1866, controlled and held in trust reparations owed to plaintiffs and their ancestors,” the lawsuit said.

The plaintiffs are seeking class-action status for the lawsuit, which a federal judge must approve. The suit names the Department of the Interior and the Bureau of Indian Affairs as defendants.

The majority of mainstream Americans know little to nothing of the violent and unjust history of the colonization of Native America. Anytime such truth is revealed to the public on the big screens, it should be done fairly since these are rare opportunities to reach the masses. The brutality of the Sand Creek Massacre of 1864 is one of the most horrific events in American history, but it is so shameful and remains out of sight, ignored, and therefore out of the minds of the majority of Americans. Shane Black’s Iron Man 3 includes the story of Sand Creek in the first real acknowledgement of the massacre in the modern mainstream film industry, but Black miserably fails to take advantage to shed some light on the dark and shameful history of the U.S.

In the movie the villain called the Mandarin (Ben Kingsley) justifies his violence in a series of propaganda videos. One video showed historic pictures of Cheyennes, even children at Carlisle boarding school, with his voice-over telling how the U.S. waited for warriors to depart on a hunt before soldiers attacked the peaceful camp. The Mandarin then asserts that this same tactic inspired his terrorist group to attack a church in Kuwait filled with the families of American soldiers. Initially, I was generally impressed that Sand Creek was actually mentioned in the blockbuster film. I was even fascinated that the fictionalized villain correlated the Sand Creek Massacre to conflicts in the Middle East. Unfortunately, by midway through the film, I was completely disappointed and deeply upset that the massacre was even mentioned.

The purpose for using Sand Creek wasn’t too clear, but results in too many wrong assumptions. Are Americans supposed to hold resentment towards their terrorists as Cheyenne survivors held resentment towards the U.S. after Sand Creek? Does the correlation promote sympathy for unjust acts of genocide committed by the U.S. in 1864, or condemn terrorists as unjust and irrational as the U.S. soldiers? Whatever the case, the use of Sand Creek further confuses the populace of crimes of the past.

If the movie had made a parallel between the U.S. atrocities committed at both Sand Creek and in modern Middle East conflicts, like the revisionist films of the 1970s, then it would actually promote sympathy for the insurgents, since they defend their families and homelands against the same imperial aggression. The Mandarin’s comparison had potential to be an intelligent reflection of the George Santayana’s celebrated quote: “those who ignore history are bound to repeat it.” But this was not the case and such parallels are likely to never happen in Hollywood. Besides this isn’t my primary concern.

What upset me the most is that when the Mandarin was captured and exposed as a fraud, and as he lost all credibility, he took the true story of Sand Creek with him. By virtue of association, the true story of the massacre was falsified, devalued, and in all likelihood, branded in the minds of viewers as nothing short of propaganda from a fictional terrorist played by a drug-addicted actor, played by Ben Kingsley. I would rather have the events of Sand Creek completely ignored than be subjugated to so many levels of fictionalization.

Those who teach American Indian history already face major challenges because we are often doubted for teaching unpopular content. We are also not easily respected as experts, nor are we privileged with credibility when teaching of America’s history of deception and violence against Indians. We must learn an art of teaching that encourages students to intellectually engage and evaluate unpleasant and threatening truths, while ensuring that they are welcomed and respected, as they are encouraged to welcome and respect Indian perspectives. We also must substantiate and cite facts in access to avert the appearance of bias. This is not an easy art that one can learn over night, but must be done as we sincerely and honestly impart valuable knowledge and wisdom. Both the Mandarin and Iron Man represent a source of such challenges.

I understand that the Mandarin had to develop as a worthy villain and at the end of the day it was just a movie. But when actual events, especially well-documented heinous acts of genocide, are included in make-believe stories the truth in history can also become make-believe, especially to those with no prior knowledge. Viewers may come to pompously devalue or fiercely contest any future exposures to American Indian history, especially when learning of events where innocent Indian people fell victim to the violence perpetrated and condoned by the U.S.

Most who have never learned of American Indians typically rely on Hollywood for education, whether they know it or not. Hollywood has refined their art of deception.

Iron Man 3 represents that deception, enabling ignorance to thrive while disgracing the nearly 200 innocent Cheyenne men, women, and children who were murdered that cold day on November 29, 1864. Any massacre should never be fictionalized.

Dr. Leo Killsback is a citizen of the Northern Cheyenne Nation of Montana and culturally and spiritual identifies as a Cheyenne person. He is an qssistant professor in American Indian Studies at Arizona State University.