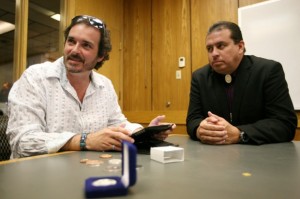 The Crow Tribe in Eastern Montana is gearing up to mint sets of copper, silver and gold coins it hopes will slowly replace the dollar as the reservation’s main currency.
Billings Gazette reporter Ed Kemmick has the full story on the “Scout”:

LaForge, director of the tribe’s LLC Department, which helps people establish small businesses on the reservation, will join with other tribal leaders to introduce the new currency during the grand entry for the Crow Fair powwow Friday night at 7.

LaForge has been working on the project since March with Eddie Allen, director of Sovereign Economics, a Dallas-based business that helps “nations, states, communities and groups around the world” establish their own currencies, according to the company’s website.

The new currency will be introduced gradually, LaForge said, and could eventually be used to pay tribal employees.

Business that have contracts with the tribe could also be asked to accept partial payment in scouts, he said.

One obvious benefit of having a Crow currency would be to encourage tribal members to spend their money on the reservation, LaForge said, which could in turn prompt people to open more small businesses on the reservation.

Allen said the slogan of the Lakota Nation effort to use its own currency is “Keep it on the rez.”

Though the currency is designed to be used on the reservation, Allen said, it could be used by anyone anywhere who finds another person willing to accept it in return for wares or services.

To help finance the launching of the Crow currency, the tribe commissioned the minting of 1,000 silver medallions commemorating the Battle of the Little Bighorn and began selling them during Crow Native Days in June.

Those 1-ounce medallions are not considered currency and are being sold at $50 each, mainly to coin collectors or people with an interest in the Battle of the Little Bighorn, Allen said.