A population explosion of harbor seals and sea lions along the Washington coast and in Puget Sound is interfering with recovery of weak salmon and steelhead stocks, threatening tribal treaty rights and posing increasing threats to public safety throughout our region.

At the root of the problem is the Marine Mammal Protection Act (MMPA) of 1972, a well-intentioned law that was needed at the time, but today has led to unintended consequences.

Tribes historically lived in balance with marine mammals, salmon and all other elements of the environment. But commercial hunting and state-directed control measures had driven down many West Coast marine mammal populations by the time the MMPA became law.

But while harbor seal and sea lion populations have steadily increased over the past four decades, the opposite is true for many salmon and steelhead stocks in western Washington, which continue to steadily decline.

No one is claiming that the increase in harbor seals and California sea lions is the main reason for the loss of salmon and steelhead. We know that the cause is ongoing loss and destruction of salmon habitat.

That means there are fewer salmon and steelhead available for others species that depend on the ocean ecosystem. Threatened orcas, for example, must compete for salmon – their preferred food – with steadily growing seal and sea lion populations and steadily shrinking salmon populations.

As the salmon decline, the fishing rights of the Salmon People – the treaty Indian tribes in western Washington – are increasingly threatened. Our treaty-reserved rights depend on salmon being available for harvest.

As seal and sea lion populations increase, so do their encounters with humans, especially fishermen. Experts at stealing fish from nets and fishing lines, they have been seen taking fish right out of boats tied up to the dock. In many marinas, sea lions lay claim to docks, causing thousands in damage and lost revenue and threatening anyone who gets too close.

With each encounter they become less afraid of people and more aggressive, putting fishermen and everyone else at increased risk. Control measures – such as rubber bullets and firecrackers – just don’t work because seals and sea lions quickly learn to avoid or ignore them.

Federal government action is long overdue to address the problems being caused by the overpopulation of harbor seals and sea lions in Washington marine waters. One encouraging recent development is the Endangered Salmon and Fisheries Predation Prevention Act introduced by U.S. Reps. Jamie Herrera Beutler of Washington and Kurt Schrader of Oregon. The act would streamline the current lengthy process for state and tribal natural resources managers on the Columbia River to remove problem animals if attempts to chase them off are unsuccessful. That is a good step in the right direction. We must reduce the added pressure that these marine mammals are putting on these already diminished resources. We must focus our management efforts on the resources that need the most protection.

Harbor seal and sea lion populations must be brought back into balance with the reality of today’s ecosystems, which cannot support their steadily increasing numbers. We need to focus our efforts on protecting and restoring habitat to successfully recover salmon populations so we can have both sustainable strong runs of wild salmon and healthy marine mammal populations.

California sea lions are literally piling into Astoria’s East Mooring Basin. They’ve taken over every square foot of the boat docks, and they’re even lying on top of each other for lack of space.

The latest sea lion count in the marina tallied a record 2,340 – a “mind-boggling number,” according to Bryan Wright of the Oregon Department of Fish and Wildlife.

There’s probably a connection there, according to Nate Mantua, research scientist with the National Oceanic and Atmospheric Administration.

Mantua said unusually warm water temperatures in the Pacific stretching from the Gulf of Alaska all the way to Mexico have likely affected the fish seals and sea lions typically eat in the ocean. The population of sardines, one of the staples of their diet, is experiencing a major crash. Meanwhile, millions of smelt returned to the Columbia River this year.

“The male sea lions that migrate up the coast in the spring and winter, they’re probably having a hard time finding food in the usual places where they forage,” he said. “Whereas the lower Columbia River has a relative abundance of food with the smelt run and the early stages of the salmon run.”

Wright said biologists have noticed a jump in sea lion numbers in the lower Columbia River that corresponds with several years of strong smelt runs in the river.

“It’s doubled and then doubled again and then increased even more, not quite doubling this year,” Wright said. “This year we’ve had a record number of California sea lions in the lower river near Astoria, following on the last two years, which at the time were historic numbers.”

Steve Jeffries, marine mammal biologist with the Washington Department of Fish and Wildlife, photographed a huge group of 6,422 harbor seals at the mouth of the Columbia last month. He said seals also follow the smelt runs, which have been significant the past two years.

More than 6,000 harbor seals were documented near the mouth of the Columbia River at Desdemona Sands. Steve Jeffries/Washington Department of Fish and Wildlife

He noted the California sea lion population of around 300,000 “is about as large as it’s ever been,” so changes in food availability are more likely to have an impact. In California, warm water has shifted the sea lions’ food base farther from shore, where females have their pups, he said.

“The females have to forage farther out, and they basically abandon their pups because they have to search farther and longer,” he said. “Their normal prey they eat has been disrupted. So they spend more time foraging and at some point their pups have to nurse.”

Wright said a big question now is how many sea lions will stay in the Columbia River and eat returning spring salmon. Oregon and Washington have authorization to kill some of the sea lions to protect threatened salmon and steelhead at Bonneville Dam. 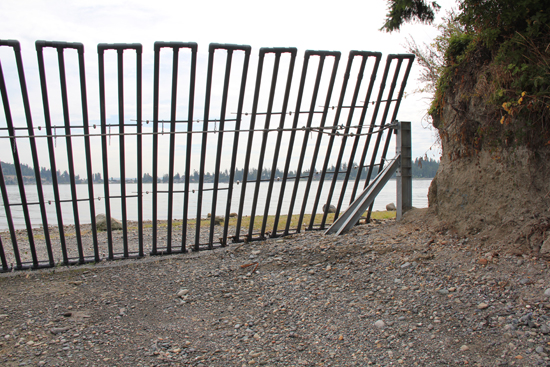 Tulalip­­−Though marauding sea lions have been a constant nuisance to hatchery operations, it is now apparent they stand to threaten the success of hatchery runs as they have become more aggressive, pushing further upstream into holding areas for returning salmon. Through a series of upgrades to the facilities at the Bernie ‘Kai Kai’ Gobin Hatchery at Tulalip, changes are being made to optimize salmon returns.

Newly built sea lion fences at Battle Creek and below the hatchery dam and fish ladder prevent sea lions from going up stream, while allowing salmon to pass through.

“At low tide, the sea lions are belly-crawling up Battle Creek and taking females out of the holding area,” said Jesse Rude, hatchery assistant manager. “We can’t have a shortage of eggs, otherwise we have no fish to hatch.” Rude further noted that, “these fences are first of their kind. No other system like it is known to be used, or in existence.”

At the damn, a small pond with a barricade of rocks sits below the fish ladder, behind the new fence. This allows the salmon to get behind the fence where they are protected, while keeping the salmon from going upstream too early; another new technique the hatchery is trying. “Incidentally, this is good for the fishermen too, keeps the fish out in the bay to be caught,” noted Rude.

At the top of the ladder, a mechanized holding pen and fish lift are installed. The lift looks similar to a car elevator from a parking garage, and can lift comparable weight loads. This allows the salmon to be pulled out and processed more quickly than pitching fish by hand.

The last major upgrades were the installation of birdnetting, to keep birds from getting an easy meal in the lower ponds and creeks, and the new larger pond at the hatchery.

“With the larger pond, we are able to do a lot more Chinook,” said Rude, referring to larger quantities of eggs, and later smolt, that the pond can hold relative to the area needed to have a productive salmon hatch.

“Last year we hatched 1.5 million Coho, and we released a record 1.3 million fish.” Typically, the rate of survival is 50% to 60%; meaning only half of what is hatched actually gets released.

Ironically, the upgrades from 2005 and 2006 led to the record-breaking release of Coho. The snow built up on the birdnetting, breaking the nets and dragging the support posts, and the Jersey barriers that anchored them, into the fish ponds.

“We had to move all of the fish up to the new larger pond,” Rude explained. As a result, the Coho run was over-wintered, meaning they were more mature than normal when released.

They were free of predation back up in the pond as well. Rude said, “the otters are like rats in the ponds. They are everywhere and they eat the fish. The last couple of years we’ve had to hire predator control to manage the otters.”

When asked about the success of over-wintering and potential continuation, Rude said they would be trying similar methods with all of their runs this year.

Other upgrades include expanded feed and storage facilities, covered or shaded ponds, a concrete fish weir put in at Battle Creek, and expanding and repairing the birdnetting for all hatchery creeks and ponds.