Nearly 2500 concerned citizens gathered Dec 13th at Seattle’s convention center for the last Coal meeting in order hear others thoughts and ideas and voice their own opinions about the coal train proposal. Tulalip Chairman Mel Sheldon was one of many that were able to speak to the crowds.

“The Tulalip Tribes support job creation. We are one of the largest employers in our area,” Sheldon said. “But we will not tolerate anything that poses threats to our cultural resources, our health and our treaty rights to fish, hunt and gather. The tribes and local, state and federal governments have worked hard to improve the environment, but it won’t mean much if we find coal dust in fragile waters of the Salish Sea.”

The proposal is to transport tons of coal by railway, eighteen trains a mile and a half each, from the Powder River Basin of Montana and Wyoming through our backyard to Cherry Point for tanker shipment to Asia. Cherry Point, a sacred site for our neighbor tribe the Lummi nation, have vehemently stated their position against the Cherry Point proposed Gateway Pacific Terminal which would be detrimental to the current ecosystem at Cherry Point  which harbors not only a fragile herring population but also a sacred burial site of the Lummi nation.

“Never will Tulalip support the degradation of our ancestral burial grounds as would in this project. Whether they be here at Tulalip, or on Lummi burial grounds at Cherry Point, we stand in solidarity with our Coast Salish relatives  in our solemn responsibility to our ancestors and to our sacred lands” Stated Mel Sheldon

The proposed coal exports to china would mean millions of dollars in revenue and new jobs that would be available for years to come. The negative impacts on the environment from the use of coal outweigh the positives with the damage mining causes to its place of origin, the dust that comes off seeps into everything from water to our lungs and the burning of coal emits CO2 which depletes the ozone layer.

Mel Sheldon finished with, “From whitecap to whitecap, or the peaks of the Cascade Mountains to the Salish Sea, it is our responsibility to our ancestors, our elders, and to future generations to protect and preserve the air, water, fish and other resources that we depend on.”

Recently, tribal members from the Northern Cheyenne Reservation along with the National Wildlife Federation and conservation groups have started protesting the coal mining in the Powder River Basin stressing that the mining is destroying the habitat and polluting the Otter River which connects to the Tongue River and Yellowstone River.

Thousands of comments from residents of Washington, Oregon, Idaho, Utah and Montana addressing their concerns of the coal trains environmental impact can be viewed here,

To view the Environmental Impact Statement for the Proposed Gateway Pacific Terminal/Custer Spur visit this sight,

Comments can be submitted until January 21, 2013 here, 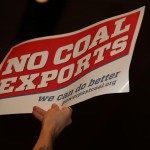 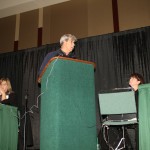 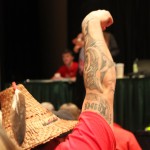 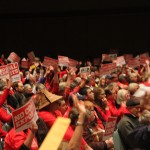 The coal prostesters wore red to the meeting and carried signs. 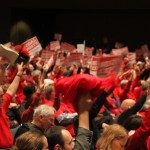