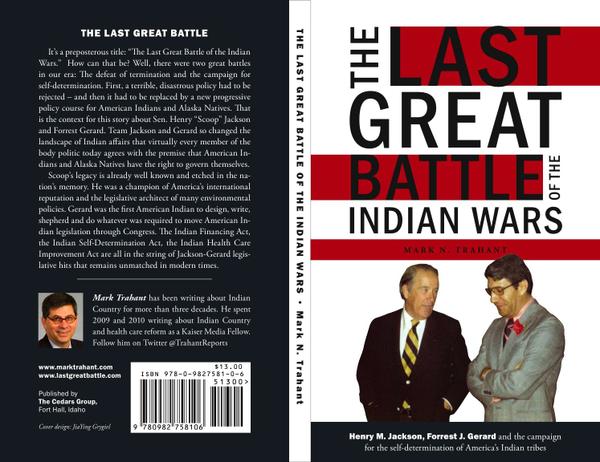 The following registers a 10 on the chutzpah meter, the platinum standard for subjective book reviews: Noodling a volume about a critical period in the struggle for Indian self-determination — a publication supported by a foundation that I’m involved with — that analyzes the legacy of one of my long-deceased family members. Hmmm.

Notwithstanding my credibility-defying baggage, Mark Trahant’s The Last Great Battle of the Indian Wars: Henry M. Jackson, Forrest J. Gerard, and the Campaign for the Self-Determination of America’s Indian Tribes, is very much worth a gander. It illustrates better than anything I’ve read in years that politics is not a Skinner Box or series of algorithms. Politics revolves around human nature, egos, and ambitions seen and unseen.

With this history, Trahant, the former editorial page editor of the Seattle Post-Intelligencer, sets the burst of 1970s legislative progress affecting Indian Country within the broader context of major misfires, in particular the odious policy of “termination” that aimed to liquidate tribal sovereignty across the land.

Forrest Gerard, an unsung congressional insider and member of the Blackfeet tribe (who eventually became an assistant Secretary of the Interior during the Carter administration), is the tale’s hero. Gerard had the credibility, bureaucratic savvy, and political smarts to convince his boss, the bete noire of Indian Country, that it was time for a wholesale shift.

Henry “Scoop” Jackson is the boss and Interior Committee chairman, the unmovable senator who moves. And Abe Bergman, the Seattle pediatrician and star of Ric Redman’s The Dance of Legislation, is the gadfly finagler for Indian healthcare. Throw in presidential ambitions, Bobby and Ted Kennedy, George McGovern, James Abourezk, an Oklahoma senator’s wife, turf battles, the National Congress of American Indians, and the farsighted (you heard me) leadership of Richard Nixon and his aide, former Seattle land-use attorney John Ehrlichman. The first line of Trahant’s book could have been, “No one could have made this stuff up.”

Termination was conceived during the Truman Administration and found full expression during the Eisenhower years. The mission was to assimilate American Indians by paying off outstanding claims and neatly extinguishing — terminating — the special government-to-government relationships.

There was a progressive, fix-it undercurrent to the new paradigm that resonated with members of both parties, although most leaders in Indian Country knew that termination spelled cultural genocide. Jackson, who helped create the Indian Claims Commission in the 1940s in a similar fix-it vein, quickly embraced termination. In 1958, he sponsored the Senate companion bill to the notorious House Concurrent Resolution 108 that enshrined the policy.

At the time, most Indian issues fell within the purview of the Senate’s Interior Committee, which conflated America’s first inhabitants with questions of natural resources, territories, and national parks. It was a systemic reality reflecting the federal government’s patronizing approach: Just lump Indians in with minerals, mines, and public lands.

The beginning of a sea change came with New Mexico Sen. Clinton Anderson’s failure to stop the return of Blue Lake to the Taos Pueblos. With even President Nixon and Colorado’s Rep. Wayne Aspinall advocating the return of the sacred lands, Anderson came up with an ill-considered last hurrah, a bill to give the Taos Pueblo Indians use of the area while denying them the title to it. Scoop, Anderson’s successor as Interior chairman, unwisely followed his mentor’s lead (the transfer was, nevertheless, approved in a 70-12 vote). Trahant frames this as an issue of personal loyalty within the gentlemen’s-club culture of the United States Senate (Disclosure: In the 1960s, Anderson introduced his recently divorced twenty-something secretary to a middle-aged Scoop. At least one of its byproducts is grateful for that).

Scoop’s voting on the Taos Pueblos’ question is a stickler, one that fuels cynicism about American politics. Consider, similarly, Sen. Dan Inouye’s support a few years ago for opening the Alaska National Wildlife Refuge to oil exploration. Was it a thoughtfully considered move or evidence of brotherly piety for Ted Stevens? Both? Loyalty shouldn’t trump the greater good, we know. We also know that men aren’t angels and governing involves compromise, sometimes too much, in fact.