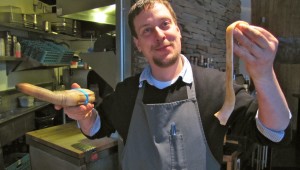 Michael Gifford, chef at Seattle’s How To Cook A Wolf, shows off a geoduck he’s preparing. | credit: Ashley Ahearn

The Locavore movement is thriving in the Northwest — with one big exception. When it comes to Puget Sound geoduck clams, the shellfish industry and local chefs are still trying to create a demand for them at home.

Geoduck clams from Washington state are prized in Asia, creating a lucrative market for the Puget Sound region’s tribal and commercial shellfish harvesters. But two months ago, China banned all shellfish imports from most of the West Coast after finding high levels of arsenic in a sample from Washington. The move has hit Washington hard, particularly the geoduck industry.

And that has the industry turning to local chefs to help boost demand close to home.

Local chef Michael Gifford remembers his first experience with geoduck clams. He got his first taste at a sushi restaurant soon after he moved to Seattle from New Jersey.

“I was like, wow, I’ve never seen this before. It’s really unique. We’re very fortunate here to have this product,” Gifford says.

These days Gifford is the chef at the Seattle restaurant How To Cook A Wolf, where geoduck clams make regular appearances on the menu. He extolled the virtues of the region’s largest clam recently while preparing geoduck crudo, or in the raw.

“This is going to get a little raunchy. As you can see the geoduck is a very phallic looking animal,” he said, standing in the stainless steel kitchen as two large clams sat on a shelf nearby, their foot-long siphons draping down.

“So what we do is we bring them in, let them relax a little bit, let them go down and get out to its natural length,” Gifford quips. These necks can stretch to a meter in length. 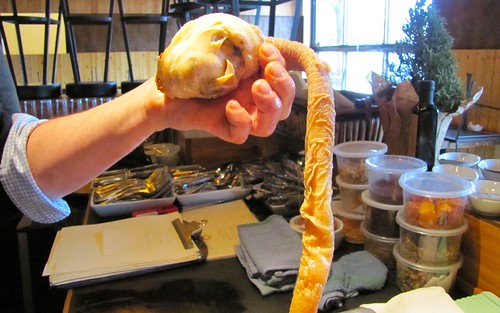 Gifford is ready to remove the skin from a geoduck’s neck. Credit: Ashley Ahearn.

Gifford places the clams into boiling water, then into ice water to “shock them.” This process makes it easy to remove the outer skin of the geoduck.

When these filter-feeders are burrowed in the sand and mud of Puget Sound, their outer skin gathers more arsenic and other trace metals than does the rest of their body. The Washington Department of Health confirmed this in December, when it went back and tested more than 50 geoduck clams after China instituted its ban. The skin of every single clam had amounts of arsenic that exceed levels that China has deemed safe for human consumption.

The clams’ other body tissue types — those found in the neck, the mantle and the gut ball — were OK in all but one sample tested by the Washington state agency.

Bill Dewey is with Shelton, Wash.-based Taylor Shellfish Farms, which bills itself as the largest producer of geoducks in the United States. He says the company has had more testing done on several different kinds of shellfish it sells, including geoduck. The levels of metals are all very low, but they’re there.

“You will see arsenic, cadmium, selenium, all sorts of different metals some good for you some not good for you in all your shellfish,” Dewey says.

The Washington Department of Health rigorously tests shellfish for biotoxins and bacteria that can make people sick immediately. But it doesn’t regularly test for metals. Past tests from the DOH have shown metals in shellfish at levels below public health concerns. As with all seafood, it’s a question of how much shellfish you eat. 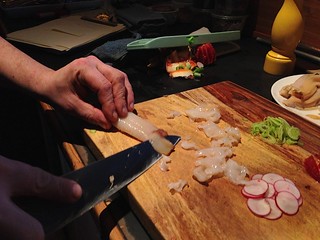 As Michael Gifford slices pearly strips of flesh off of the neck of a geoduck clam, it’s hard to think of anything other than the next step in his recipe.

He’s finely mincing Fresno chili peppers and celery. Then he smears a green stripe of avocado puree onto the plate. Finally, Gifford arranges the silken white, paper-thin strips of geoduck in ruffles.

“So then, the real fun. We’ll dress it with some nice olive oil. Little bit of lemon. We use fleur de sel, a very nice sea salt,“ Gifford says. “It’s not full of brine, but you’re getting that hint of the ocean.”

For centuries native Americans harvested geoducks from the tideflats of Puget Sound. (The word “geoduck” comes from the Nisqually word “gweduc,” meaning “dig deep.”) These were the biggest clams to be found — weighing as much as 16 pounds or more. Northwest Indians ate them fresh or smoked. By the late 1800s the region’s white settlers came to consider them a delicacy. But by the mid-20th century geoducks had all but disappeared from area beaches. To prevent the clams from becoming extinct, the government made it illegal to sell geoduck clams in restaurants and markets.

In the 1970s scuba divers discovered that geoduck clams hadn’t actually been harvested to extinction. They were bountiful in the deeper waters of Puget Sound. But by then, few Northwesterners had an interest in dinning on them in area restaurants.   But the story took a different turn in Asia. An intense marketing campaign popularized them in Asia — especially among the newly rich Chinese — causing the price to soar. They’re an especially popular delicacy around the lunar New Year (aka Chinese New Year), which takes place this year on Jan. 31. 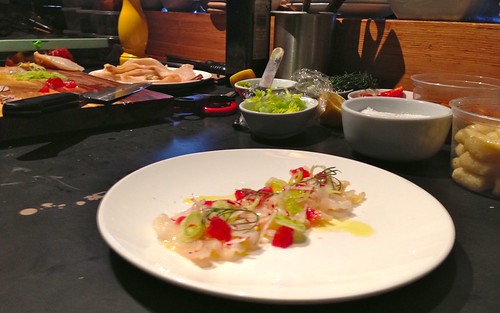 Though the clams are popular abroad, local markets are still growing. Bill Dewey says for the past decade or so, Taylor Shellfish has been actively promoting geoduck to restaurants around the Northwest. There are now close to 20 restaurants in Seattle with geoduck on the menu.

Geoduck can sell for close to $100 per pound in China, while Seattle restaurants pay around $20 per pound. The domestic market isn’t making up for the industry’s losses abroad.

Dewey says his company has had to cut back. “We did our best through the holidays to keep people employed, but ultimately it’s gone on long enough that we’ve had to lay some people off,” Dewey says. Taylor has laid off 14 people and estimates its losses at upwards of $1 million.

The Chinese ban is affecting others, too. Divers with the Suquamish and other tribes have been out of work for weeks, losing thousands of dollars every day. The Department of Natural Resources is out close to $1 million in revenue from geoduck harvested on state lands.

For now, geoduck may be a tough sell for most Northwest diners. But if more chefs like Michael Gifford have their way with this quirky clam, the future might look a little more delicious.

Katie Campbell contributed to this report. Toni Tabora-Roberts produced this story for the web.