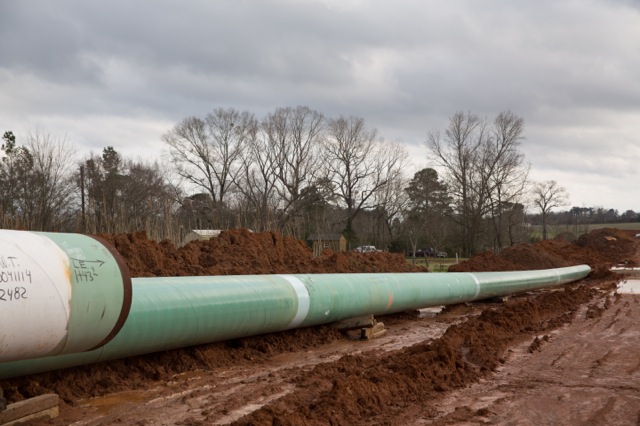 Image credit: Installation of the southern portion of the Keystone XL on Michael Bishop’s property in Douglas, Texas ©2013 Julie Dermansky

TransCanada shut down the southern leg of the Keystone XL (now called the Gulf Coast Pipeline Project) on June 2 for “routine work,” according to Reuters.

“Pipelines aren’t normally shut down for maintenance shortly after being started up. They may have planned it but something is wrong,” an industry insider told DeSmogBlog. “A two day shutdown on a new line raises suspicions.”

The Pipeline and Hazardous Material Safety Administration was unable to provide an answer to DeSmogBlog when asked to confirm if the shutdown was due to routine work today.

TransCanada states this claim often, despite the serious issues cited by pipeline regulators in warning letters, along with the two new special conditions added to the existing 57 required if the northern section of the pipeline is permitted.

Can that statement be true after an undisclosed number of new girth welds were introduced into the pipeline during the repair process?  Despite the high weld rejection rate that regulators warned TransCanada about, a new pressure test was not required to check the new welds.

“Let’s remember, TransCanada claimed that the Keystone I pipeline system would be one that would ‘meet or exceed world-class safety and environmental standards’ and leak an average of 1.4 times a decade,” Rocky Kistner, a communications associate for the Natural Resources Defense Council, wrote on the NRDC‘s blog.

“In just its first year of operation, Keystone leaked 14 times, a hundred times more leaks than TransCanada predicted. On its Canadian side, the pipeline has leaked at least 21 times.”

TransCanada’s Bison Pipeline in Wyoming also had to be shut down after a portion of it ruptured six months after it was put into operation.

Evan Vokes, former TransCanada employee turned whistleblower, told the Wyoming Tribune that speed was put ahead of safety on that project. He noticed problems with pipe alignment welding, excavation and backfilling, among other things while working on that project.

“It is questionable that a pipeline which generates millions of dollars a day, in operation for barely six months, is suddenly off,” Kathy DaSilva, an activist representative of the Tar Sands Blockade, told DeSmogBlog.

This latest incident led the Tar Sands Blockade to renew its call for Keystone XL‘s southern leg to remain shut down until further testing is done to ensure the pipeline’s integrity.

The advocacy group Public Citizen also called for a new pressure test on the pipeline.

“Given the stakes – the looming potential for a catastrophic spill of a hazardous crude along a pipeline that traverses hundreds of streams and rivers, and that comes within just one or two miles of some towns and cities – it would be irresponsible for the federal government to allow tar sands crude to start flowing through the southern leg without ordering a complete hydrostatic retesting of the line and a thorough quality assurance review,” their report on the Keystone XL‘s southern route concluded.

The big question remains: is the Obama administration playing Russian roulette with Texas and Oklahoma aquifers by not requiring the retesting on the Gulf Coast Pipeline?