WASHINGTON, Sept 30 (Reuters) – The Federal Communications Commission is considering whether to punish broadcasters for using the moniker of the Washington NFL team, the Redskins, a word many consider a slur to Native Americans, the agency’s chairman indicated on Tuesday.

The FCC, which enforces broadcast indecency violations, has received a petition from legal activist John Banzhaf III, asking that regulators strip local radio station WWXX-FM of its broadcasting license when it comes up for renewal for using the name “Redskins.”

Banzhaf says the word is racist, derogatory, profane and hateful, making its use “akin to broadcasting obscenity.”

“We’ll be looking at that petition, we will be dealing with that issue on the merits and we’ll be responding accordingly,” FCC Chairman Tom Wheeler told reporters.

“There are a lot of names and descriptions that were used over time that are inappropriate today. And I think the name that is attributed to the Washington football club is one of those,” Wheeler added.

The FCC could formally deem use of the team name to be indecent, and thus impose a de facto ban on it on over-the-air television and radio.

Despite protests, vigorous lobbying and even intervention from President Barack Obama, team owner Daniel Snyder has vowed not to change the name of his National Football League team.

Some TV football analysts, including CBS’ Phil Simms and Super Bowl-winning coach Tony Dungy, have said they will no longer use the term Redskins. On the other side, former Chicago Bears coach Mike Ditka, a Hall of Famer, says the issue is “so stupid it’s appalling.”

Half of the U.S. Senate asked the NFL to endorse a name change and the Washington Post editorial board has also said it will stop using the team’s name, although it will still be used in the rest of the paper, including the sports section.

In June, a panel of the U.S. Patent and Trademark Office canceled the team’s trademark registration because it considers its name and logo disparaging. The team has appealed the decision in federal court. 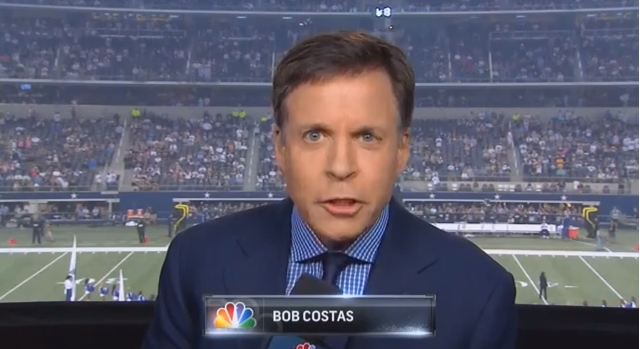 During halftime of the Sunday Night Football game between the Washington Redskins and the Dallas Cowboys, NBC announcer Bob Costas took the microphone and delivered a talk on how he believes the Redskins’ name is an “insult” and a “slur.”

Costas began by saying he didn’t believe anyone in the Redskins organization had any ill-will towards Native Americans, which we doubt few people would argue. Then Costas discussed the difference between the Redskins’ name and other teams like the Braves, Chiefs and Warriors, and closed by making it clear: He believes the Redskins should change their name.

Here is the full transcript of his speech:With Washington playing Dallas here tonight, it seems like an appropriate time to acknowledge the ongoing controversy about the name “Redskins.”

Let’s start here. There is no reason to believe that owner Daniel Snyder, or any official or player from his team, harbors animus toward Native Americans or wishes to disrespect them. This is undoubtedly also true of the vast majority of those who don’t think twice about the longstanding moniker. And in fact, as best can be determined, even a majority of Native Americans say they are not offended.

But, having stipulated that, there’s still a distinction to be made. Objections to names like “Braves,” “Chiefs,” “Warriors,” and the like strike many of us as political correctness run amok. These nicknames honor, rather than demean. They are pretty much the same as “Vikings,” “Patriots,” or even “Cowboys.” And names like “Blackhawks,” “Seminoles,” and “Chippewas,” while potentially more problematic, can still be okay provided the symbols are appropriately respectful – which is where the Cleveland Indians with the combination of their name and “Chief Wahoo” logo have sometimes run into trouble.

A number of teams, mostly in the college ranks, have changed their names in response to objections. The Stanford Cardinal and the Dartmouth Big Green were each once the Indians; the St. John’s Redmen have become the Red Storm, and the Miami of Ohio Redskins – that’s right, Redskins – are now the Red Hawks.

Still, the NFL franchise that represents the nation’s capital has maintained its name.  But think for a moment about the term “Redskins,” and how it truly differs from all the others.  Ask yourself what the equivalent would be, if directed toward African-Americans, Hispanics, Asians, or members of any other ethnic group.

When considered that way, “Redskins” can’t possibly honor a heritage, or noble character trait, nor can it possibly be considered a neutral term.  It’s an insult, a slur, no matter how benign the present-day intent. It is fair to say that for a long time now, and certainly in 2013, no offense has been intended. But, if you take a step back, isn’t it clear to see how offense “might” legitimately be taken?

The name of a certain pro football team in Washington, D.C., has inspired protests, hearings, editorials, lawsuits, letters from Congress, even a presidential nudge. Yet behind the headlines, it’s unclear how many Native Americans think “Redskins” is a racial slur.

Perhaps this uncertainty shouldn’t matter — because the word has an undeniably racist history, or because the team says it uses the word with respect, or because in a truly decent society, some would argue, what hurts a few should be avoided by all.

But the thoughts and beliefs of native people are the basis of the debate over changing the team name. And looking across the breadth of Indian Country — with 2 million Indians enrolled in 566 federally recognized tribes, plus another 3.2 million who tell the Census they are Indian — it’s difficult to tell how many are opposed to the name.

The controversy has peaked in the last few days. President Barack Obama said Saturday he would consider getting rid of the name if he owned the team, and the NFL took the unprecedented step Monday of promising to meet with the Oneida Indian Nation, which is waging a national ad campaign against the league.

What gets far less attention, though, is this:

There are Native American schools that call their teams Redskins. The term is used affectionately by some natives, similar to the way the N-word is used by some African-Americans. In the only recent poll to ask native people about the subject, 90 percent of respondents did not consider the term offensive, although many question the cultural credentials of the respondents.

All of which underscores the oft-overlooked diversity within Indian Country.

“Marginalized communities are too often treated monolithically,” said Carter Meland, a professor of American Indian Studies at the University of Minnesota.

“Stories on the mascot issue always end up exploring whether it is right or it is wrong, respectful or disrespectful,” said Meland, an Ojibwe Indian.

He believes Indian mascots are disrespectful, but said: “It would be interesting to get a sense of the diversity of opinion within a native community.”

Tommy Yazzie, superintendent of the Red Mesa school district on the Navajo Nation reservation, grew up when Navajo children were forced into boarding schools to disconnect them from their culture. Some were punished for speaking their native language. Today, he sees environmental issues as the biggest threat to his people.

The high school football team in his district is the Red Mesa Redskins.

“We just don’t think that (name) is an issue,” Yazzie said. “There are more important things like busing our kids to school, the water settlement, the land quality, the air that surrounds us. Those are issues we can take sides on.”

“Society, they think it’s more derogatory because of the recent discussions,” Yazzie said. “In its pure form, a lot of Native American men, you go into the sweat lodge with what you’ve got — your skin. I don’t see it as derogatory.”