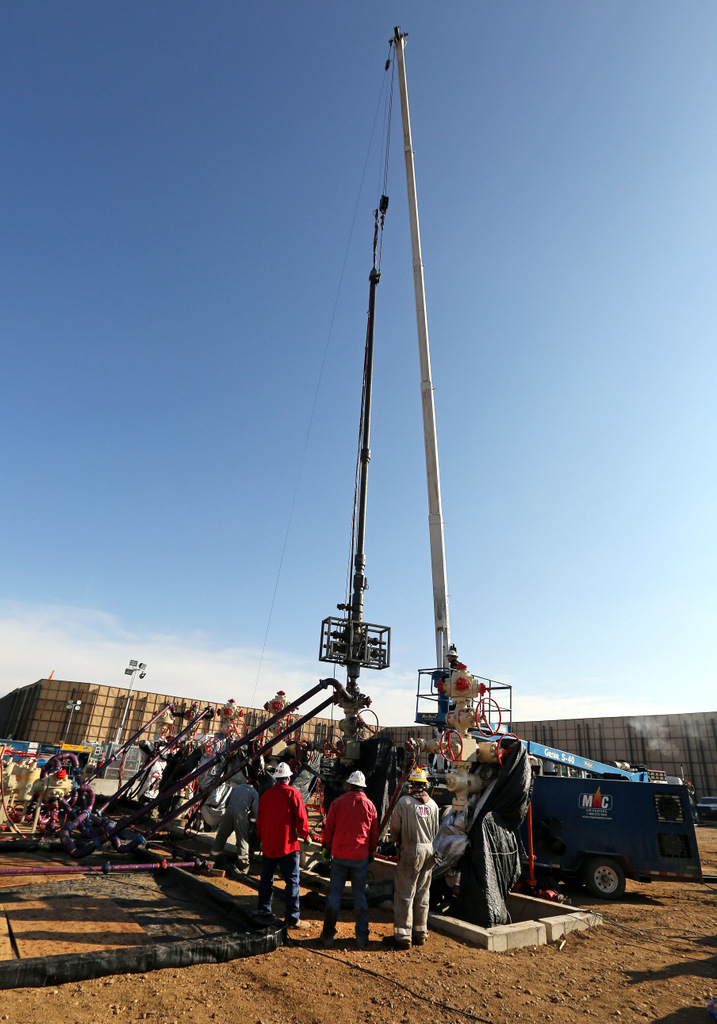 Perforating tools, used to create fractures in the rock, are lowered into one of six wells during a roughly two-week hydraulic fracturing operation at an Encana Corp. well pad near Mead, Colo. (AP/Brennan Linsley)

In a victory for fracking opponents, towns in New York today won the right to ban oil and gas production operations from their communities. The ruling may have widespread effects on the drilling industry as towns continue to file moratoriums on the environmentally harmful process.

The decision sets a precedent for environmental activists in New York as more than 170 of the state’s other municipalities wait for legal action to be taken on anti-fracking measures in their communities as well. Towns in Colorado, Ohio, California, Pennsylvania and Texas are also beginning to pursue oil and gas production bans, public interest law firm Earthjustice reports.

The New York Court of Appeals ruled 5-2 that the communities of Dryden and Middlefield can use zoning laws to prohibit heavy industry within municipal borders. The decision rested in large part on preserving the quality of life and “small town character” of both towns, which are situated in rural areas of New York and have not been historically associated with the oil and gas industry.

Industrialization, particularly fracking, would “irreversibly overwhelm” the rural character of these communities, the court stated.

The seven-judge panel said that its ruling was not a statement on the safety of the controversial practice of fracking, but about the division of state and local government power.

“These appeals are not about whether hydrofracking is beneficial or detrimental to the economy, environment or energy needs of New York, and we pass no judgment on its merits,” Associate Judge Victoria Graffeo wrote for the majority opinion.

“These are major policy questions for the coordinate branches of government to resolve. The discrete issue before us, and the only one we resolve today, whether the State Legislature eliminated the home rule capacity of municipalities to pass zoning laws that exclude oil, gas and hydrofracking activities in order to preserve the existing character of their communities,” she said.

Still, many activist groups see the decision as a victory for the environment.

“The decision by the Court of Appeals has settled the matter once and for all across New York State and has sent a firm message to the oil and gas industry,” said Earthjustice managing attorney Deborah Goldberg.

Dryden recently garnered the attention of the natural gas industry for its proximity to the Marcellus Shale, a methane-heavy formation that covers large areas of land in New York, Pennsylvania, Ohio and West Virginia. Middlefield, while not in shale territory, is primarily an agricultural community that was recently evaluated as a potential natural gas resource.