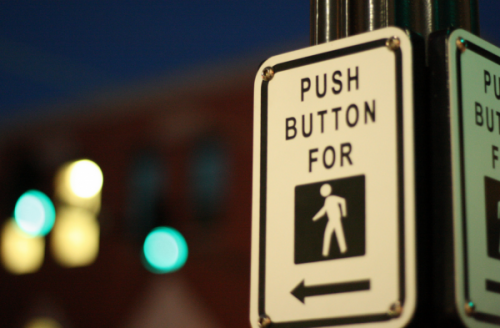 Pedestrians of American Indian descent at are at higher risk of death in Washington state, according to a report released Tuesday by the National Complete Streets Coalition, a branch of Smart Growth America.

Washington placed 36th out of 50 states and the District of Columbia in a ranking of the most dangerous states to the least dangerous based on the Pedestrian Danger Index, a combined measure of total pedestrian deaths, annual pedestrian deaths and the percentage of people commuting by foot over the past five to eight years. The Seattle-Tacoma-Bellevue area ranked 49th out of 51 large metro areas.

But for Washingtonians of American Indian descent, the statistics aren’t as reassuring. Nationwide, Native Americans  have higher rates of fatal traffic accidents than other ethnicities. But that difference is particularly notable in Washington state where all other ethnic groups’ fatality rates are consistently lower than national averages. 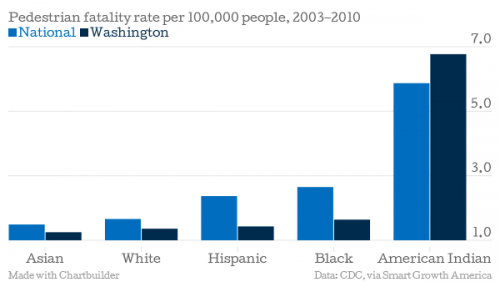 ‘The Gap, Unfortunately, Is Widening’

“The gap, unfortunately, is widening,” said MJ Haught, a program manager and tribal liaison for the Washington Traffic Safety Commission. Over the course of the past few decades, Haught said, the rate of Native American fatalities went from about 2.4 times that of the general population to 3.3. And in 2013, she said, “the data told us that Native American fatalities are 3.9 times higher than the general population. This is obviously not the way we want to go.”

Unlike Other Groups, Native Americans More At Risk On Rural Roads

Both statewide and nationwide, most pedestrian deaths occur in the more populated urban areas. But according to state data, more Native Americans were killed in crashes on rural roads than on urban ones, opposite the pattern seen with pedestrians of all other ethnicities.

Why? There’s no easy answer, but here are a few factors to consider.

Washington state has 29 federally-recognized American Indian tribes. Alaska, California and Oklahoma are the only other states with more tribes within their borders. According to 2010 U.S. Census data, only six states have American Indian and Alaska Native populations greater than that in Washington.

Each reservation is its own sovereign nation with its own laws, which means roads and signs are built and distributed differently. In rural areas, on tribal lands or off, there aren’t always sidewalks, and not all roads are well-lit.

According to the Center for Disease Control and the National Highway Traffic Safety Administration, Americans of Native American and Alaska Native descent tend to be at higher risk of car injuries overall, not just as pedestrians. Some tribes don’t have seat belt laws.

Even with the comparatively high rate of Native American pedestrian deaths reported, we may not be getting the full picture. Because each reservation is a sovereign nation, not every tribe shares data with the state, and the data that is available is conservative.

“The rates for fatalities are coming in with death certificates. We’re pretty good at getting all the reports that happen on Washington land, but not necessarily the reports from reservation land. That varies very much by the tribe and the reservation,” said Haught. “We are confident that the traffic deaths are underreported, so it’s an even worse problem than we realized.”

Thomas Holsworth is commander with the Colville Tribal Police Department in Nespelem, in northwest Washington. The reservation covers 1.4 million acres and, as in many rural areas, most of the roadways that crisscross it are narrow, windy country roads without sidewalks.

“The pedestrian walkways are basically the dirt shoulders of the roadways,” says Holsworth. “But I think a lot of it is, they just tend to walk more, sometimes out of necessity, because … they may not own an operable vehicle. There are others that just like to get out and walk, and there’s not a whole lot of safe places to do that.”

The Confederated Tribes of the Colville Reservation have gone to great lengths to try to reduce traffic-related deaths on tribal lands, assimilating state traffic codes into their tribal code and launching multiple highway safety programs. Funded by a state grant, the tribes ran a public education campaign to increase awareness about using seat belts, driving under the influence, and launched projects to identify problem roads and walking paths.

In the last five years, Holsworth says, there has only been one pedestrian fatality.