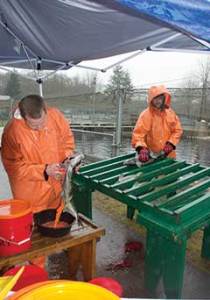 Tribal and state co-managers continue to improve their ability to track hatchery salmon in the Snohomish watershed.

By altering the water temperature during incubation, hatchery managers can leave a distinct pattern on each fish’s otolith – a mineral structure often referred to as an ear bone, which accumulates daily rings. When fish return as adults, their otoliths are examined under a microscope to identify where and when they were released.

A portion of Snohomish regional hatchery fish also have coded-wire tags inserted into their snouts for identification in fisheries where otoliths are not examined. Also, adipose fins from most hatchery chinook and coho are clipped, which identifies them as hatchery fish but does not tell fishery managers where they are from.

While both of these methods can be expensive and hard on the fish, otolith marking is a cost-effective way to ensure that all the fish are marked and uniquely identifiable simply by changing the temperature of the water going to the eggs.

Tulalip also has hired additional staff and increased the number of returning fish that are sampled from the spawning grounds and in regional fisheries and hatcheries. Tribal technicians remove the heads of spawned-out fish in rivers and hatcheries, and from a representative number of the catch, and read the otoliths in the tribes’ stock assessment lab.

“We run all the otoliths for the entire area,” Crewson said. “It’s an important tool to assess straying and genetic risk and protect tribal treaty rights.”

Data show a significant reduction in hatchery strays since 2004 when 100 percent of the remaining hatchery chinook production was switched to the local native Skykomish River summer chinook broodstock.

“Our treaty fishing rights depend on these fish,” said Terry Williams, Tulalip’s fisheries and natural resources commissioner. “As long as natural production is limited by habitat loss and damage, we will need hatcheries.”