“haʔɬ dadatut,” they said. The children said it back to them.

The kids sat in a circle for their first lesson: a song, simply called “Hello Friend,” and sung in Lushootseed to the tune of “Frère Jacques.” 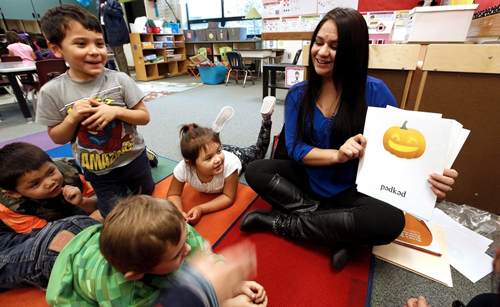 For years Tulalip children have received lessons in their ancestral tongue at the Tulalip Montessori School and the Betty J. Taylor Early Learning Academy on the reservation. The written form of the language includes characters found in the International Phonetic Alphabet.

This year Lushootseed, or dxʷləšucid, the language of Coast Salish Indians around Puget Sound, was reintroduced to the Marysville School District for the first time since 2011. That’s when the old Tulalip Elementary in the heart of the reservation was closed.

About 50 kindergartners and first-graders — five total classrooms — are getting daily language lessons from Martin and St. Onge this fall.

The simple explanation for the reintroduction is that the Tulalip Tribes were able to hire more teachers.

“Our problem is we were short-staffed. We’ve never had a full crew,” said Michele Balagot, the tribes’ Lushootseed department manager.

Newly hired teachers start out by teaching pre-school kids, and ideally would remain with the same the class of students as they get older, she said.

That’s not very easy in practice, however.

Add to that the fact that most of the teachers hired have had to learn Lushootseed at the same time they taught it to the children, one of the aftereffects of the boarding school era in which the language was suppressed almost to the point of extinction.

Maria Martin, who is 25, represents a new generation of speakers. She started learning the language as a child in the Montessori school, but throughout her school years only learned the language in the Tulalip summer language camps.

The Lushootseed program sends new hires to Northwest Indian College in Bellingham for formal instruction before they are put in front of a class.

Martin said she feels reasonably fluent when in front of the class, although still consults with her superiors in the language program when she needs specialized vocabulary.

In Poyner Wallis’ class, she gave instructions to the kindergartners in Lushootseed first, and only English if the kids didn’t appear to understand them.

In one exercise, she held up a flash card with a picture of a brown bear. “stəbtabəl̕,” the kids chimed together.

She held up a picture of a frog. “waq̓waq̓!”

Then she held up an orca, but the kids are unsure and need reminding. “qal̕qaləx̌ič,” Martin said, and the kids shape out the unfamiliar glottal consonants.

A picture of a salmon also stopped them cold, and Martin prompted then with the answer: “sʔuladxʷ.”

“That’s a hard one because it looks like qal̕qaləx̌ič,” one boy piped up. “I almost said ‘salmon’.”

The student body at Quil Ceda Tulalip is about 60 percent Native American, although the actual figure is likely higher once children of mixed marriages or parents who aren’t enrolled in a tribe are taken into account, said Chelsea Craig, a cultural specialist at the school.

All the schoolchildren have been getting a dose of native culture in the morning assembly, which includes singing and a drum circle. The school is also leading the charge in incorporating native history into its regular curriculum.

Craig said she hopes that by getting the kids into Lushootseed while still young, they will learn their ancestral language and come to associate it with a supportive and healing environment.

“My great-grandmother was beaten for speaking Lushootseed,” she said, referring to the boarding school era, which began in 1860 and didn’t truly end until the 1978 passage of the Indian Child Welfare Act.

When Craig was growing up, some tribal elders could still speak the language, she said.

“The elders spoke it but didn’t share it, because it was too traumatic,” she said. “My great-grandmother didn’t want me to go through what she went through.”

Some Lushootseed words are introduced at the morning assembly, but it’s the lessons in class that are moving toward making the language thrive again.

In Poyner Wallis’ classroom, the kids were split into groups. Nik-Ko-Te St. Onge used the children’s book “Brown Bear, Brown Bear, What Do You See?” to help reinforce the vocabulary, and then moved on to flash cars with numbers.

St. Onge held up a card with the number six on it. Jordan Bontempo counted out loud on his fingers.

Meanwhile, Maria Martin gave the kids pictures of a bear to color that also had a connect-the-dots tracery of the Lushootseed word “stəbtabəl̕.” Two kids colored the bear brown and one black, but others went for green, purple, rainbow stripes and one outside-the-lines expressionist squiggle.

When they were done with the bear, they moved on to a picture of a frog.

Carlee James-Jimicum waved her completed bear at Martin. “I’m ready for my waq̓waq̓,” she said.

Balagot said that there are about 40 people on the Tulalip reservation who can speak Lushootseed with some degree of conversational skill.

“We probably couldn’t hold a full conversation, but we could get the gist of what we’re saying,” she said.

The hope is the 50 kindergartners and first-graders will grow into older kids and teens who can add to that number.

Like Martin, perhaps some of them will return to teaching the next generation.

After finishing up in Poyner Wallis’ class, St. Onge and Martin split up. Martin walked down the hall into Lisa Sablan’s kindergarten class, where the kids were eagerly waiting for their lesson.

When she stepped into the room, they all called out together, welcoming their teacher and friend “haʔɬ dadatut syaʔyaʔ!”