URBANA — A University of Illinois student group has organized a walk on the Quad tonight to show support for a Native American student who recently wrote about the anguish brought on by still seeing images of the retired, but not gone, Chief Illiniwek.

“Walk with Xochitl” is scheduled for 6 to 7 tonight on the UI Quad.

The student wrote the open letter to Chancellor Phyllis Wise, the Board of Trustees and other campus administrators, posted it on social media sites but declined to be interviewed by The News-Gazette. Members of the Native American Indigenous Student Organization, which organized tonight’s event, also declined comment. The event is being advertised as a walk “in solidarity for a better campus climate.” 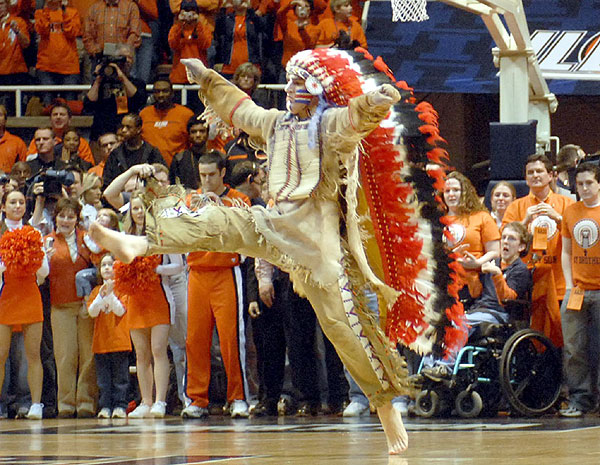 By Heather Colt, AP
11/11/2007
University of Illinois mascot Chief Illiniwek made his final appearance for the school, performing during the Illini-Michigan basketball game in Champaign. Chief Illiniwek’s career ended after 81 years because of pressure from the NCAA, which considers the mascot offensive to American Indians.

In the letter posted last week, the senior student writes about “the legacy of disrespect and racism” she has experienced at the UI and the “emotional, physical and spiritual pain that seeing the former-yet-still-lingering Chief mascot has on me.”

“As an indigenous student, this image and every likeness to it represented a complete disregard for American Indian culture and spiritual practices, and that every time I saw it, it was not only an emotional stab, but also an impediment to my academic success,” she wrote.

She called on the chancellor to prohibit students from wearing Chief Illiniwek apparel and other accessories.

The student says she will leave the UI feeling disappointed with the chancellor; trustees; Office of the Dean of Students; Office of Diversity, Equity, and Access; and College of Liberal Arts and Sciences.

The student also describes how she contemplated committing suicide on the Quad, writing: “This whole Chief situation was so unbearable, and the apathy on behalf of administration so painful, that it was obvious that nothing was going to change.”

“We are fully aware of it and have taken steps to make contact with (the student) and have different units of campus provide services to her,” Frost said.

Campus spokeswoman Robin Kaler said whenever the university learns of “students who face challenges that require intervention, we connect the student with assistance and we remain connected until we are confident the student’s well-being is restored,” she said.

“Race and ethnicity are complicated issues in our country, state and university. While no one measure can address the issue, we will continue to hold dialogues about race and cultural sensitivity,” Kaler added.

As they do for campus rallies and other events, university police planned to meet in advance with the walk’s organizers.

“We will be involved to make sure everybody has a chance to express their viewpoints,” Frost said.

The campus officially ended use of Chief Illiniwek as its official symbol or mascot in 2007, but some students still wear Chief apparel and an “unofficial” Chief often appears in costume at games and walks through the crowds, raising his hands.

Also last year, a group of former Illiniwek portrayers asked trustees to bring back a non-dancing version of the Chief to halftime shows. Wise said the Chief is part of the school’s past, not its future.

CLEVELAND, Ohio – Native Americans and others who believe the Cleveland Indians’ mascot, Chief Wahoo, is a demeaning caricature plan to demonstrate outside Progressive Field on Friday during the baseball team’s home opener.

Organizers behind the demonstration have tried to rally people against Wahoo on opening day for more than 20 years, though team owners and baseball fans have generally ignored them. In some years, only a handful of demonstrators have stood with signs against Wahoo.

Organizers hope to find greater support this year because of the renewed attention Wahoo has received in the growing national debate over sports mascots and names sparked by the NFL’s Washington Redskins’ controversy.

The Plain Dealer editorial board recently called on the Cleveland Indians’ owners to drop the smiling, big-toothed, big-nosed cartoon Indian, which has been used for more than 60 years.

Ferne Clements, who has helped organize the demonstration for 21 years, says she can’t predict whether or not support for the protest will grow this year.

“But the message hasn’t changed,” said Clements, who works with the Native American advocacy group, The Committee of 500 Years of Dignity and Resistance. “We can’t settle for anything less than a name and logo change. The logo is racist and the name does not honor Native Americans.”

Team owners, who have largely remained silent in the debate, have said the team has no plans to dump Wahoo, which remains popular with fans.

As they do each year, the demonstrators plan to march at 12:30 p.m. from West 25th Street and Detroit Avenue to Progressive Filed, where they will stay until about 3 p.m.

Other Native American organizations are also participating in opening-day demonstrations against Wahoo, according to Facebook postings and email messages.

Ferne, who is not Native American, said she and others are already looking ahead to 2015, which marks the 100th Anniversary of the team name. 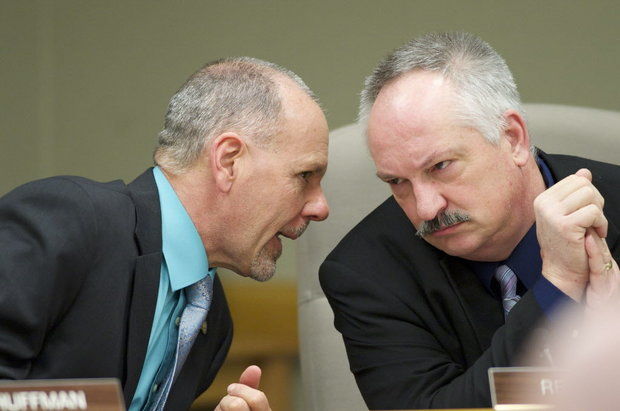 A bill allowing some Oregon schools to retain their Native American mascots in spite of a statewide ban drew a mixed reaction from lawmakers Monday.

Lawmakers passed a similar bill last year but Gov. John Kitzhaber vetoed it, saying its exemption to a blanket ban adopted by the Oregon Board of Education in 2012 was too broad.

Senate Bill 1509 kicks the issue back to the board, charging it with setting up new rules for acceptable mascots in consultation with Oregon’s nine federally recognized tribes.

“This is round two and this time we got it right,” Kruse said.

“It’s a bad road to go down,” Sachs told lawmakers. “We’ve been on this path for eight years to eliminate the use of Native American mascots. It doesn’t make sense to in five weeks overturn that.”

Sachs said if lawmakers are going to pass the bill, Gov. John Kitzhaber should form a taskforce to study the impacts of Native American mascots on students. Studies reviewed by the Oregon Department of Education showed such mascots left Native American youth with a poor self image.

Rep. Jeff Reardon, D-Portland, said he agonized over the vote. While Oregon’s nine federally recognized tribes would be consulted under the bill, he worried about Native American students that didn’t belong to an Oregon tribe losing their voice in the process.

“I want to advance the cause of education for Native Americans but I want to do that for all,” Reardon said. “How do we have any kind of agreement that doesn’t take into account necessarily all of the kids?”

During the meeting Rep. Chris Gorsek, D-Troutdale, raised his voice in response to a lawmaker who suggested not all schools with Native American mascots were hot beds of discrimination.

“It offends me that people don’t pay attention to research,” Gorsek said, waiving a file folder in the air.

The committee advanced the bill to the House floor for a vote. Gorsek and Reardon voted no. The Oregon Senate unanimously approved the bill. 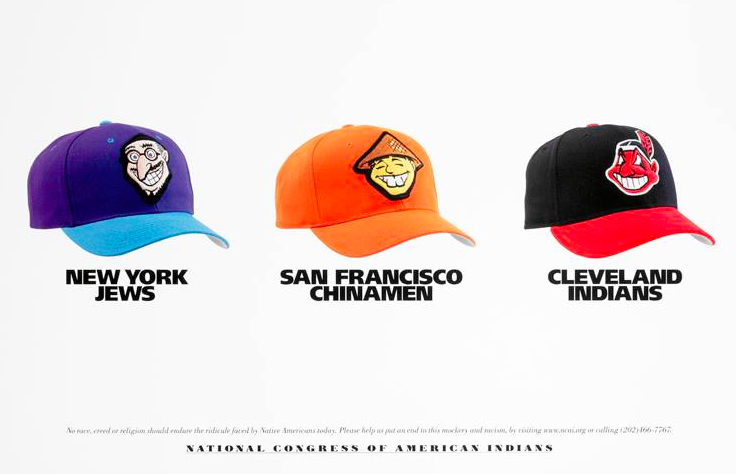