By Jim Kershner, The Spokesman-Review 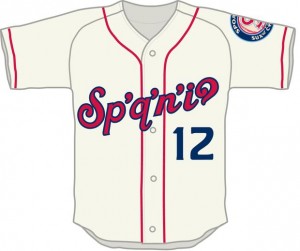 Beginning in the 2014 season, the Spokane Indians baseball team will sport the team name in Salish on home jerseys.

When the Spokane Indians baseball players take the field this summer, the team name will be blazoned across their chests: “Sp’q’n’i.”

That’s the Spokane Salish language version of the name. On opening day, June 13, this Short Season Class A minor league baseball team will become the first-ever professional baseball team to use a Native American language in this way.

The jersey is the fruit of an unusual collaboration between a team and a tribe. Unusual, because in several high-profile examples – the Washington Redskins and the Cleveland Indians, to name two – the issue of Indian-related team names and mascots has generated more controversy than collaboration. In Cleveland, the “Chief Wahoo” mascot has been derided as a demeaning cartoon; in Washington, D.C., the team name has been derided as just plain racist.

In Spokane – or should we say Sp’q’n’i – both the tribe and its namesake team have worked hard in recent decades to establish the name Spokane Indians as a tribute, as opposed to just a mascot. In 2006, the tribe helped to create new circular team logo, with words written in the Salish language. This year, the tribe worked with the team in creating the new Sp’q’n’i jersey, and supplied the team with an accurate rendering of the word (which also includes a final symbol not found in the English alphabet).

Both Rudy Peone, chairman of the Spokane Tribe of Indians, and Otto Klein, senior vice president of the Spokane Indians baseball team, are acutely aware of how sensitive these issues can be. That’s why the two institutions have developed a collaboration.

“The team, the name, it’s not named for a vague group,” said Peone. “… This is the Spokane Indians, named specifically for our tribe. We’ve accepted that and have a very close working relationship, in a respectful way.”

“We work with them, not against them,” Klein said. “We meet with the tribal chairman each year and say, ‘What have we done to promote the tribe, and what can we do?’ “

Barry Moses, a Spokane Tribe member who teaches Salish language classes at the Salish School of Spokane, has mixed feelings about it.

Peone believes this is the first time a professional baseball team has used a native language in this way on a uniform.

“There have been Native American teams that have done it, but, yes, this is the first time that we know of that a professional team has done so,” said Peone.

Meanwhile, the baseball team is working on giving Salish an even higher profile throughout Avista Stadium. Many of the signs in the park will be in both English and Salish. The team is also expanding its existing historical exhibit about the tribe, and moving it to more prominent positions around the park. The game jerseys themselves will be auctioned off at the end of the season, and proceeds will go to tribal youth programs.

Klein said he thinks local fans will quickly grasp the meaning and significance of the name. But what about visiting fans from out of town? Might they be confused about that word on the front of the uniforms? Klein said the section leaders will have information cards about the name and they will be happy to use the question as a “conversation piece” about the team’s 100-plus year tribal connection.

The preservation of the Salish language is particularly close to the hearts of many tribal members, because, as the decades go by, fewer and fewer people are fluent in the Spokane dialect of Salish. Peone called the new jerseys a way to “educate thousands of baseball fans about the language and culture” of the city’s first inhabitants.

Many Northwest tribes shared the Salish language, yet many had their own distinct dialect. In Moses’ estimation, there are only five or six fluent Spokane Salish speakers left, most of them elderly. However, there has been a recent resurgence of interest among younger generations. The Salish School of Spokane even has full-immersion Salish preschool.

The team won’t be able to wear the jerseys in every home game – at least not this year. The baseball team originally hoped the new Salish jerseys could be their everyday 2014 home jerseys. However, the team didn’t get the designs submitted to the league office before the deadline, so the Sp’q’n’i jerseys can only be used as “alternate” jerseys in 2014, which means they can be worn in under half of the home games. Klein said the team will wear them at most of 2014’s “biggest” home games, including Fridays, Saturdays and holidays, and also at the home opener. Then, in 2015, the Sp’q’n’i jerseys will be the primary home jerseys.

Klein said the collaboration has given his team a unique identity, steeped in history.

Klein said that, in recent years, the team has not received any kind of “flak” about its name. Yet Peone is certainly aware that there are “folks sensitive to the mascot issue.” The American Indian Movement’s National Coalition on Racism in Sport and Media has issued the following statement about Indian-themed sports mascots in general: “American Indians are a People. Not mascots for America’s fun and games.”

The coalition decries the Cleveland Indians’ Chief Wahoo, the “tomahawk chop” and the name Washington Redskins. Yet there is no consensus on this complicated issue, as evidenced by the fact that the sports teams at Wellpinit High School, the main high school on the Spokane Reservation, are named the Redskins.

The Spokane Indians baseball team does not use an Indian-costumed mascot. The team’s mascot is Otto, a bright blue “reptile with style.” Nor does the team lead its fans in the tomahawk chop. To Peone, the use of the Salish language in the logo and jerseys makes the Spokane Indians “more than a mascot.” He said the tribe has been generally supportive of the partnership because of the way in which it kas been done.

Meanwhile, the unique Sp’q’n’i jerseys may prove to be a big hit at the merchandise store – although Klein said that was certainly not the team’s motivation. A portion of those proceeds, too, will go toward tribal youth programs.