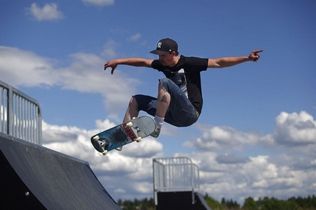 Mark Mulligan / The Herald
Terrance Patterson, 22, of Stanwood, skates off of the new ramps recently installed in the skatepark at Heritage Park in Stanwood on Tuesday afternoon.

STANWOOD — The city’s skate park got a makeover this month, with the older wooden ramps replaced by modular-style steel ones.

“It’s a lot more interesting and a lot more fun,” said Nate Brown, 19, of Stanwood, who was one of several people testing out the new ramps this week.

The Vito Z Memorial Skate Park NW features a mix of these ramps around a two-step concrete platform and skate rail. The skate park is open from dusk to dawn and is located in Heritage Park at 9800 276th St.

The city paid $60,000 for the new ramps, which were installed by the American Ramp Co. over a couple of days earlier this month.

Christie Connors, director of the Community Resource Center, helped organize a meeting about the project in March with local skaters. She was one of the original park organizers in the late 1990s.

“These improvements are long overdue,” Connors said. “I’m glad the city stepped up to provide skaters and others with a safe and healthy place to play in town.”

The Vito Z Memorial Skate Park was opened in 2000 by a group of Stanwood students and adults. The park is named in honor of Vito Zingarelli, a 1-year-old, who drowned in 1993.

The park can be reserved for private parties through the city’s Streets and Parks Department.

For more information about the park and reserving it for events go to the city’s website at www.ci.stanwood.wa.us or contact public works assistant Lisa Noonchester at 360-629-9781 or lisa.noonchester@ci.stanwood.wa.us. 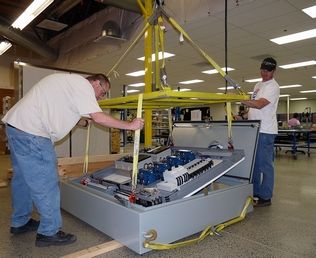 STANWOOD — When you think of electrical panel and control systems manufacturing, you probably wouldn’t put Stanwood very high on a list of likely contenders.

But the city is home to Washington’s largest such business, Process Solutions.

Why Stanwood? It doesn’t have a reputation for tech manufacturing as Arlington, Mukilteo and Bothell do. But it does have a mayor, city officials and local boosters who want attract and keep family-wage jobs.

When the Port of Bellingham lured away the building’s former occupant, Index Sensors & Controls, the city didn’t want to see it sit empty and wanted another occupant with an equally robust payroll.

Process Solutions designs and builds electrical control systems and the software that controls them for industries including food processing and packaging, biotech and pharmaceutical, water and wastewater, energy management, manufacturing and aerospace. It builds more than 2,000 control panels per year. North America accounts for 95 percent of the company’s business, Busby said. It did $13 million in sales in 2012 is on track do close to $15 million this year.

Process Solutions President Todd Busby said he was drawn to the Index Sensors building on the east end of town, across the parking lot from Stanwood Cinemas, because it was much more attractive than the three metal buildings his company occupied in Arlington.

Besides, Busby said, with a metal building, “there’s only so much you can do with it.”

However, he wasn’t sold yet on Stanwood. Busby liked Arlington and had been negotiating a ground lease with the city for a bigger facility. He said the deal fell apart after city officials wouldn’t accept liability for anything Busby uncovered during excavation and site preparation. That brought Busby back to the Index Sensors building.

Stanwood community development director Rebecca Lind said she crunched numbers with the city’s finance director and determined that the real-estate excise tax from the property sale would offset the cost of water and sewer, so the City Council agreed to a five-year utility waiver for Process Solutions.

The building’s vinyl floor tile presented another stumbling block for Busby. Lind said the city’s engineer and building official toured the building and wrote a report about how to correct the tile floor’s problems. Stanwood also waived fees for its review of tenant improvements and sign permits.

“That gave Todd the confidence to invest in the building,” Lind said.

“With the help of the city, we helped save the deal,” Heagle said.

Process Solutions closed on the sale in August 2011 and moved into the building April 15, 2012. Busby celebrated his first anniversary in Stanwood with a tour of the 28,000-square-foot engineering and manufacturing facility.

Process Solutions employs 62 people. About 40 engineers occupy cubicles in the front half of the building, but Busby noted that most of them spend a lot of time on the road with far-flung clients.

The manufacturing floor fills the back half of the building. The vinyl tiles that Busby so disliked are gone. He had the concrete slab ground smooth and polished, removing seven tons of material.

A crane helps workers place large, heavy electrical panels into service boxes instead of using a forklift like most of Busby’s smaller competitors do.

Each work station has overhead power and compressed air for tools and a rack Busby invented that holds 10 spools of wire. Workers can unroll just the wire they need, so copper waste fell from 7 percent to 1 percent, he said.

And then there are the batting cages. Busby, a Little League and soccer coach, said it’s a gift to his employees and their kids.

Busby wanted to have a building that appealed to prospective and current employees. There’s a spacious lounge where workers can make a cup of coffee and see what’s on the giant, flat-screen TV. Daylight filters into the building. Busby worked with designer Garrett Kuhlmann of H2K Design in Stanwood on the interior decor.

So far, Busby’s investment in employee comfort and aesthetics is paying off. He’s recruited eight new engineers since January and gained a $500,000 contract with a customer who saw the building after leaving a movie.

“We wanted to invest in our own building,” Busby said. “It reflects the quality of the work we do.”