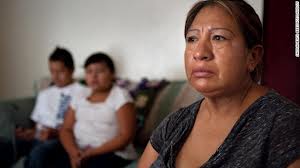 A mother from the Rosebud Sioux Tribe faces arrest for protecting her children from an abusive couple:

The emergency room doctor was furious at what he had seen, recalled Audre’y Eby, who is Rosebud Sioux and the mother of disabled 16-year-old twins. One of her sons, who is blind and autistic, squirmed on the examination-room table, screaming, “Ow, ow, it hurts!” The doctor had found livid red and purple bruises covering his penis and scrotum, according to the Nebraska hospital’s records. Those injuries would soon lead to an arrest warrant for the mother—not because she had caused the harm, but because she did not return her son, along with his wheelchair-bound twin, to their abusers.

Indian child welfare expert Frank LaMere called the twins’ situation more extreme than any he’d seen in his many years of work in the field. “These boys are suffering,” said LaMere, who is Winnebago and the director of Four Directions Community Center, in Sioux City, Iowa.

The day before the ER visit, Eby, who is 45, drove from the Nebraska farm where she lives with her husband, Faron, to pick up her boys from their father in Iowa. It was early August of 2013, and she was going to have them for the once-a-month weekend visit the courts allow her. The boys’ father is Eby’s ex-husband; he has physical custody of the kids, and his live-in girlfriend is their primary caretaker. Eby and the boys are Native, and the father and his girlfriend are white—facts that LaMere says overshadow decisions that social-services professionals and the courts make on the children’s behalf.