A training from leading experts on suicide prevention and reducing secondary trauma due to social media presented by the Tulalip Tribes, Marysville School District and City of Marysville. 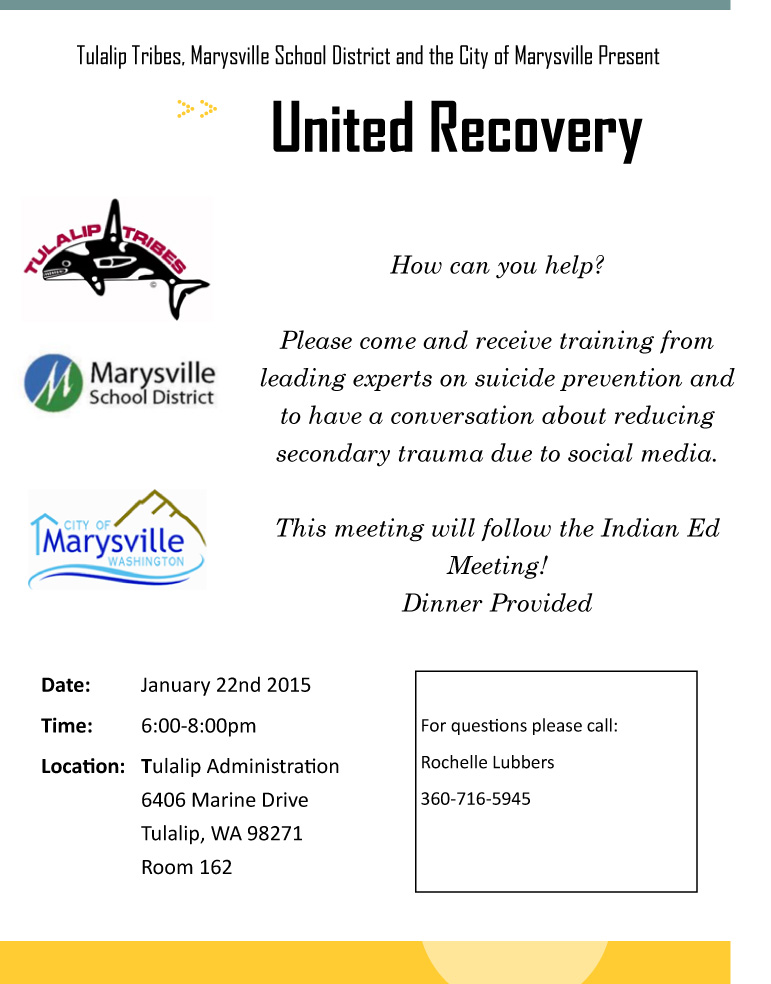 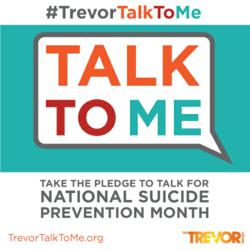 TULALIP, Wash. – September is national Suicide Prevention month and the Tulalip community has come together to spread awareness about this misfortune. Studies by the National Institute of Mental Health have found that American Indians and Alaskan Natives have the highest rates of suicide with 14.3 per 100,000 compared to Non-Hispanic Whites 13.5, Hispanics 6.0, Non-Hispanic Blacks 5.1 Asian and Pacific Islanders 6.2.

During Tulalip’s community meeting on Friday, September 13th, the focus was on suicide prevention awareness and motivational speaker Arnold W. Thomas was asked to attend and share his life changing experience in an effort to highlight the warning signs and steps to take when someone may be having suicidal thoughts.

In 1988 Thomas attempted suicide, an event that left him alive yet permanently disabled. Due to the extensive damage from his suicide attempt he was left permanently scared, blind and unable to speak for many years.

“I should have died on that night. I lost a lot of blood, swallowed a lot of blood into my lungs, “said Thomas about the night he tried to take his life. Thomas was 18yrs old in high school, playing basketball and going through many confusing emotions about the suicide of his father two years prior. At a time of deep emotional turmoil, Thomas was using drugs and alcohol and began thinking that no one cared and instead of talking to someone or asking for help he put a gun to his head.

Thomas believes that suicide is not the problem, the real problem is, “Our inability to express our thoughts and our feelings in manner which helps us to feel at peace in our head and our heart.”

“Tell them you love them,” explained Thomas, on how important it is to talk to people close to you about your feelings and show gratitude to your family and friends. “All the bones in my face were shattered and I spent two years not being able to speak. I saw how I hurt my family. I made a commitment to go through any and all surgeries to reconstruct my face and maybe one day I’d be able to talk again.”

Thomas is a Shoshone-Paiute native and has prevailed over his depression and physical disabilities. He has undergone 30 surgeries and completed a rehabilitation program that allows him to live independently. Thomas has earned a degree in psychology, a masters in social work and owns a consulting business called White Buffalo Knife that allows him to travel all over the country to share his story of perseverance.

According to Global Mental Health, mental health disorders have become a global issue that currently affects 450 million people worldwide*. Tulalip Family services is working hard to inform the community about the prevalence of suicide among young people and especially Native people in hopes that it will inspire others to care and help someone that is dealing with depression.

The National Suicide Prevention  Line is 1-800-273-8255. For help with depression or help to speak with someone about depression please call Tulalip Family Services at 360-716-4400 or go to save.org. For more information about Arnold Thomas please visit www.whitebuffaloknife.com 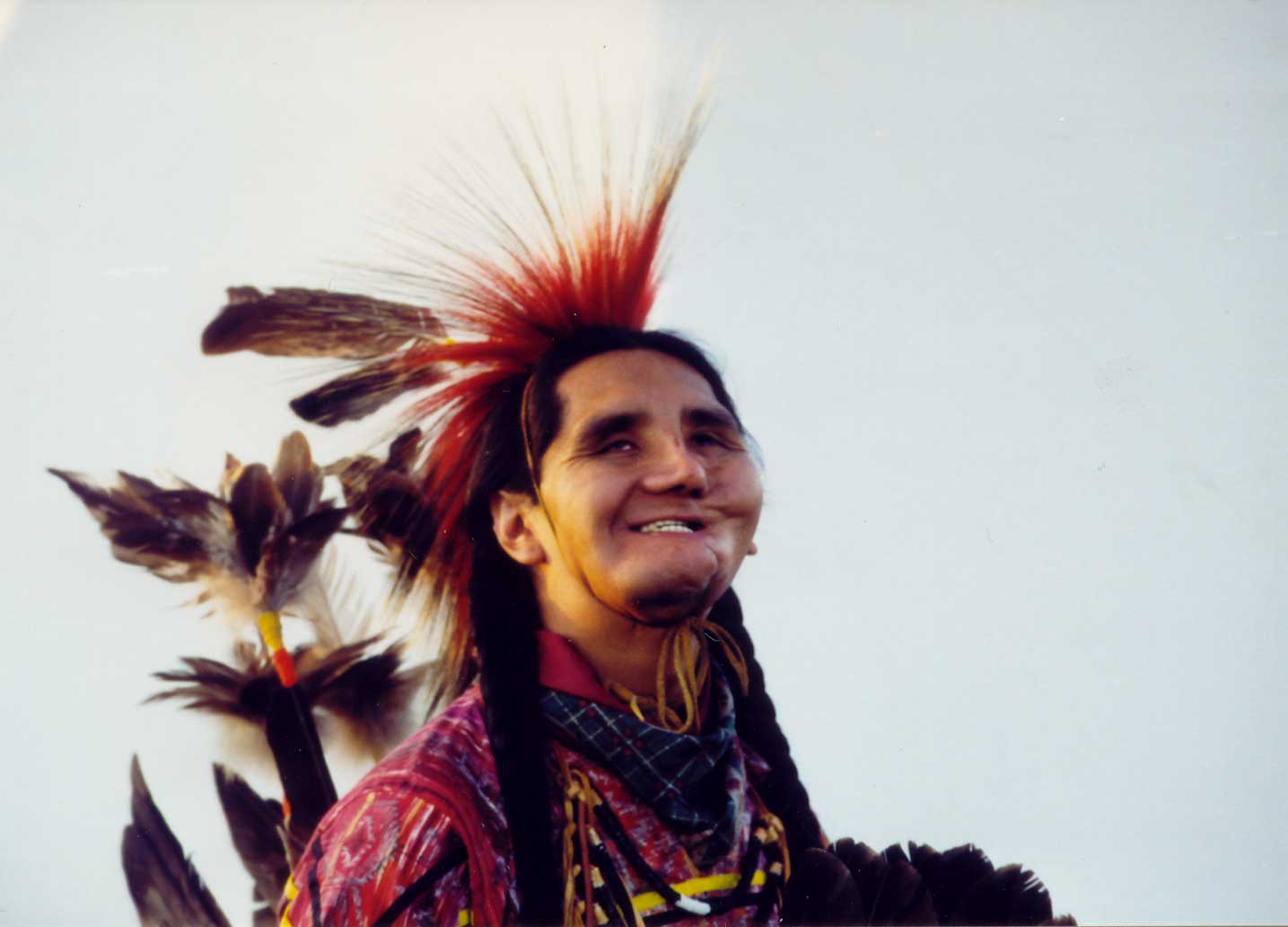 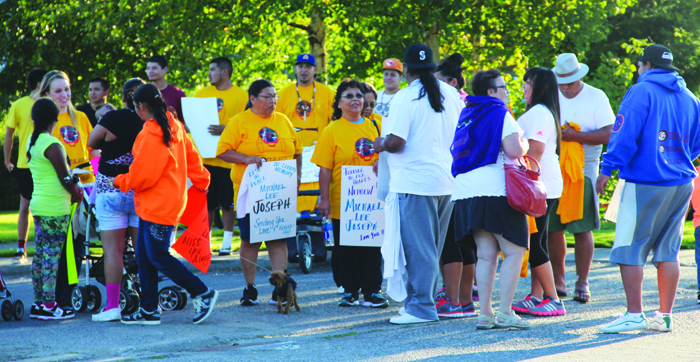 Family and friends in the Tulalip community join together to walk in remembrance of loved ones lost to suicide. Photo/Andrew Gobin

Tulalip − “People came together to make this happen,” said Rochelle Lubbers who organized a community suicide prevention walk Tuesday, September 10th, in honor of World Suicide Prevention Day. “More than 150 people participated in Tuesday’s event,” she continued, “which was surprising, yet inspiring.”

Families wore the colors of World Suicide Prevention Day, some personalized with photos and names of people they have lost to suicide. Many also made signs in memory of loved ones that were victims of suicide.

The walk began near the Tulalip Health Clinic, and stretched half way around the bay, ending at the tribal center with a candlelight vigil and potluck.

The event was entirely community driven. The food served was brought by participants, the ribbons and craft supplies were donated by Michael’s, and Wal-Mart and Safeway each donated $25 worth of goods to the event. 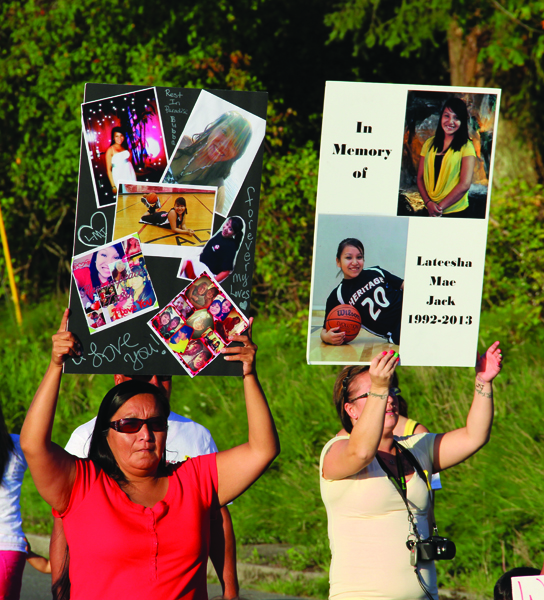 World Suicide Prevention Day is held on September 10th every year, and though this is Tulalip’s first year participating, it began ten years ago.

Lubbers said, “I just wanted to raise awareness about the issue. Even when it happens here, it seems that people talk about the person, which is good, but we never seem to address the issue. I think if more people were aware of the issue, more could be done to stop it.” 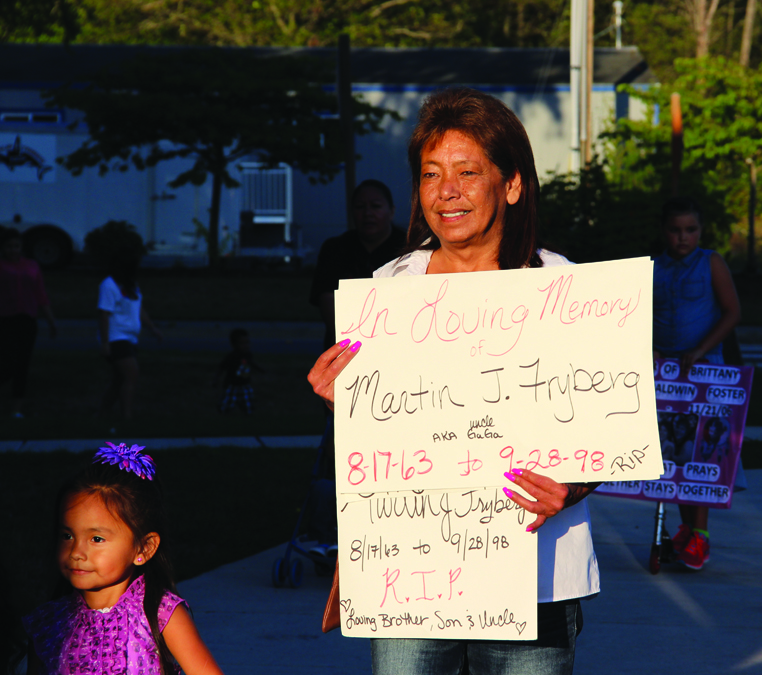 Sherry Dick joins the walk in honor of her brother.