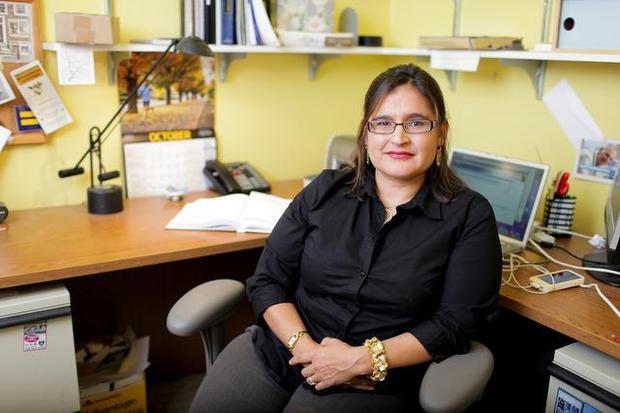 Raquel Montoya-Lewis, shown in her office at Fairhaven College in 2011, was appointed to a new seat on the Whatcom County Superior Court by Gov. Jay Inslee on Monday, Dec. 15, 2014.
RHYS LOGAN | WWU — Courtesy to The Bellingham Herald

Whatcom County will have its first Native American Superior Court judge in 2015.

When Raquel Montoya-Lewis begins her term in January, she also will be the only Superior Court judge of tribal descent in the state.

Gov. Jay Inslee announced Monday, Dec. 15, he had appointed Montoya-Lewis to Whatcom County Superior Court. Montoya-Lewis, 46, is from the New Mexican tribes Pueblo of Laguna and Pueblo of Isleta. She is chief judge for the Nooksack and Upper Skagit tribes, and an associate professor at Western Washington University’s Fairhaven College.

“I’m really excited and honored to serve Whatcom County in this role,” Montoya-Lewis said in a phone interview on Monday. “I also recognize the importance of the appointment in terms of the question of diversity. I think it’s really important that the state court system reflect the people that it serves.”

“Raquel’s 15 years of experience as a judge will be well appreciated on the Superior Court,” Inslee said in a statement. “She is wise and has a strong commitment to service and to promoting justice. I know she will serve the community and the court exceptionally well.”

Montoya-Lewis was named this year to the Federal Advisory Committee on Juvenile Justice. She also is an appellate judge for the Northwest Intertribal Court System.

She was heartily endorsed by Bellingham City Council member Roxanne Murphy, a member of the Nooksack Indian Tribe.

“She has handled some of our most complex cultural, political and societal issues and managed these cases with the utmost care, intelligence, timeliness and fairness,” Murphy wrote in an email to the governor she sent on Wednesday, Dec. 10.

Montoya-Lewis has presided over the highly publicized “Nooksack 306” case in tribal court. The tribal council seeks to disenroll 306 members who the council says were mistakenly added to the rolls in the 1980s. The case has gone back and forth, but Montoya-Lewis has generally ruled in favor of the council, saying it has broad authority over membership decisions.

Montoya-Lewis remains the presiding judge in the case, and she said Monday she couldn’t comment on it.

The governor’s appointment stems from a bill passed by the 2013 Legislature authorizing a fourth Whatcom County Superior Court judge. Inslee’s selection comes two years after Deborra Garrett became the first woman to be elected to Whatcom County Superior Court. Besides gender balance, the appointment provides the court with another judge to take on the backlog of civil and felony criminal cases in the court.

“I think Raquel is going to be able to come in and hit the ground running,” Judge Charles Snyder said. “We’ll probably start giving her cases as soon as she gets in the door.”

Snyder sat with Montoya-Lewis on a panel discussing diversity in the legal system in 2012.

“I found her to be a very bright person who obviously has a good knowledge of the law,” Snyder said on Monday. “She will bring a new perspective, being the first Native American to come on the (Whatcom) bench.”

Montoya-Lewis emphasized her impartiality, regardless of who comes before her in the courtroom.

“There is certainly a large number of native people that come through the civil and criminal court in Whatcom County,” she said. “I think I will bring a unique perspective in serving that part of the community, but I see my role as serving the entire county. I see my role as being fair and neutral and unbiased.”