Want to know what the next president of the National Congress of American Indians will be like? Take a look at the pace of the candidates in the weeks leading to NCAI’s convention and election.

One of the four will be elected to a two-year term as president when NCAI meets October 13-18 in Tulsa, Oklahoma. NCAI’s president is not salaried but leads an organization that has a staff of 33 and a lot of clout.

This is an influential crop of candidates.

Cladoosby recently pulled in seine nets, getting a first-hand look at the results of ongoing work to restore salmon habitat, then oversaw the Tribe’s acquisition of more than 250 acres of land that had been removed from his reservation by executive order in 1873. The acreage includes a golf course and shellfish tidelands.

In Cladoosby’s 17 years as chairman, the Swinomish Tribe has emerged as one of the five largest employers in Skagit County and a major partner in efforts to restore the health of the Salish Sea. He served as president of the Affiliated Tribes of Northwest Indians, and said the NCAI presidency would give him a national platform from which to work on economic development, education, health services, and protection of natural resources.

Cladoosby served on NCAI’s board of directors and on EPA’s National Tribal Operations Committee.

“I have no doubt that Brian has the skills to advance Northwest tribal issues at a national level,” said Micah McCarty, former Makah chairman and member of the U.S. Commerce Department’s Marine Fisheries Advisory Committee.

“Tribes fared well in the Obama administration but could have done better in natural resource areas of the administration. The [Northwest Indian Fisheries Commission] Treaty Rights at Risk initiative is a case in point, regarding the need for greater national attention and better regional responses [to salmon habitat needs].”

Garcia’s leadership at NCAI is a fresh memory for many. When he left office in 2009, the National Indian Gaming Association honored him as a defender of sovereignty and a strong voice for America’s First Peoples, and New Mexico Gov. Bill Richardson proclaimed October 15, 2009 as “President Joe Garcia Day” in the state.

During his tenure, Garcia and NCAI “faced the scourge of meth, battled budget cuts aimed at cutting Indian funding, and welcomed the start of new opportunities with the Obama administration,” NIGA Chairman Ernie Stevens Jr. said at the time.

“During the 109th Congress in 2006, President Garcia’s leadership proved invaluable as Indian country came together to defend Tribal sovereignty from attacks on Indian gaming. [He] brought NCAI together with NIGA and we held over eight national meetings to develop a consensus in Indian country and take our message to Congress.”

Garcia is former governor of Ohkay Owingeh and led the 20-pueblo All Indian Pueblo Council from 2009-11. He has an electrical engineering degree from the University of New Mexico and has taught at Northern New Mexico College since 1979.

Majel-Dixon met President Obama at Camp Pendleton, spoke on behalf of NCAI at the United Tribes International Pow Wow in Bismarck, North Dakota, and lobbied to include Alaska Native women in the Violence Against Women Act.

Majel-Dixon, NCAI’s first vice president, has been a member of the Pauma Band council since 1974, professor of U.S. policy and Indian Law at Palomar College since 1981, and the Pauma Band’s policy director since 1997. She has a doctorate in education from San Diego State University.

She has long been at the forefront of efforts to restore and expand VAWA, and is a member of the U.S. Justice Department Task Force on Violence Against Women.

Tiger oversaw his nation’s acquisitions of Okmulgee Memorial Hospital and the George Nigh Rehabilitation Center, brokered an agreement to prevent a museum from auctioning Creek artwork and artifacts, and spoke at the annual Indian Country Business Summit on the importance of Native peoples spending money within Indian country.

Tiger has been a member of the Muscogee Creek National Council for 14 years and served as speaker in 2006-07. He is a regent of Haskell Indian Nations University, his alma mater.

Tiger leads an economic powerhouse that contributes to the copy0.8 billion economic impact on Oklahoma by the state’s 38 indigenous nations. Muscogee Creek-owned enterprises include a document imaging company; construction, technology and staffing services; travel plazas; and 11 casino/event centers. The College of the Muscogee Nation, founded in 2004, offers associate degrees and Mvskoke language classes.

Muscogee Creek’s government has an annual budget of more than copy06 million and more than 2,400 employees, and provides public services in eight administrative districts. 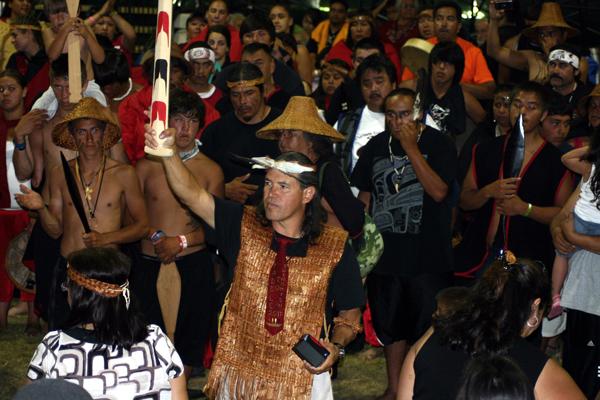 Richard Walker
Swinomish Chairman Brian Cladoosby holds a paddle gifted to him by the Quileute Nation, July 29, 2011, during the Canoe Journey/Paddle to Swinomish. Cladoosby is a candidate for president of the National Congress of American Indians.

Swinomish Chairman Brian Cladoosby, who has long worked to strengthen economic conditions and stop ecological degradation in Coast Salish country, announced his candidacy June 25 for president of the National Congress of American Indians.

If elected, Cladoosby would continue to serve as chairman of the Swinomish Tribe, he said in a pre-announcement interview. He would be the fourth indigenous leader from Washington state to serve as NCAI president.

“I believe that we live in historic times. When my grandfather’s grandfather signed the Point Elliott Treaty [in 1855], he probably could not have imagined the world that we live in today, but he thought about my grandchildren, Bella and Nathaniel. They are the seventh generation since our treaty was signed. Today, we are called to think about the seven generations to come and the world we will leave for them.”

Cladoosby said indigenous nations “have been blessed by our Creator with tremendous gifts” with which to confront the challenges of the day: Tribal governments’ ability to tax activities within reservation borders, ensuring there are educational opportunities for young people and quality health services for families and elders, protection of natural resources, and responding appropriately to climate change.

“Our teachings, our spiritual ways, the wisdom of our elders, the inspiration of our children and strong tribal leaders from across Indian country lift us up and give us strength to meet these challenges every day,” he said.

Cladoosby said he announced his candidacy only after getting the support of his wife, Nina, and the Swinomish Senate.

“I know that without them and their support, I could not begin to think about serving as president of NCAI. In the coming months, I ask for your support, your prayers and your ideas. Together, we can build the tomorrow that the grandchildren of our grandchildren can be proud of.”

Cladoosby served as president of the Affiliated Tribes of Northwest Indians in 2008-11, and served on NCAI’s board of directors and on Environmental Protection Agency’s National Tribal Operations Committee. He is also active on the Skagit Council of Governments, an organization of local governments in Skagit County, Washington.

After the November general election, incoming state Attorney General Bob Ferguson appointed Cladoosby to his transition committee, which reviewed the structure of the Attorney General’s Office, its budget, and goals for the upcoming legislative session.

As Swinomish chairman, Cladoosby has overseen a careful strategy of economic growth that has resulted in the tribe becoming one of the five largest employers in Skagit County.

The tribe owns the golf- and entertainment-oriented Swinomish Casino and Lodge overlooking Padilla Bay, two gas stations and convenience stores, a cannery that processes salmon and shellfish for a global market, and a Ramada Hotel in Ocean Shores on the Washington coast. Swinomish’s Chevron Gas Station is, according to the tribe, the largest-volume Chevron station on the West Coast.

According to the tribe’s website, Swinomish employs more than 250 people in tribal government and approximately 300 people in its economic enterprises.

Swinomish is also an important voice on environmental issues: recent local initiatives include restoring indigenous ownership and stewardship of Kiket Island, and restoring the shoreline and developing a park and native-plant garden on Swinomish Channel.

In 2008, Cladoosby helped organize the Canoe Journey Water Quality Project in collaboration with other Coast Salish nations and the U.S. Geological Survey. Canoes participating in the annual Canoe Journey carry probes and global positioning systems that record temperature, salinity, pH levels, dissolved oxygen and turbidity in the Salish Sea. The data is being processed and mapped so researchers can identify patterns and trends in sea conditions. These efforts were honored in 2009 by the U.S. Secretary of the Interior; in 2012, Cladoosby was one of five finalists for the Ecotrust Indigenous Leadership Award. (Related story: Canoe Journey Could Provide Picture of Inland Sea’s Health)

“Mr. Cladoosby has been a huge supporter for our Northwest tribes and I hope we support someone who actually sees what we are needing as tribes in the Northwest and Alaska,” a supporter wrote on Facebook, calling Cladoosby “One of the Great Native Leaders out there fighting our good fight!”

Chickasaw Nation Lt. Gov. Jefferson Keel is finishing his second as president. According to its constitution, NCAI’s purpose is to “serve as a forum for unified policy development among tribal governments in order to: (1) protect and advance tribal governance and treaty rights; (2) promote the economic development and health and welfare in Indian and Alaska Native communities; and (3) educate the public toward a better understanding of Indian and Alaska Native tribes.”