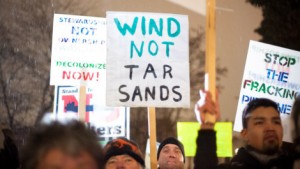 We already knew that the tar-sands operations have been dousing northern Alberta with mercury and other forms of pollution. Now university scientists have collaborated with the First Nations to test the pollution levels in hunted animals found downstream from the tar-sands sites. Here are some lowlights from their findings, which were included in a report published on Monday:

Arsenic levels were high enough in in muskrat and moose muscle; duck, moose, and muskrat livers; and moose and duck kidneys to be of concern for young children. Cadmium levels were again elevated in moose kidney and liver samples but also those of beaver and ducks … Mercury levels were also high for duck muscle, kidneys, and livers as well as moose and muskrat kidneys, especially for children. …

Total levels of PAHs [polycyclic aromatic hydrocarbons] and levels of carcinogenic and alkylated PAHs were very high relative to other food studies conducted around the world.

The First Nations members aren’t shocked to hear this. Some have already started avoiding their traditional foods because of worries about contamination, they told researchers. More from the report:

Participants were concerned about declines in the quality of [traditional] foods, in the greatest part because of environmental pollutants originating from the Oil Sands. It was notable how many participants no longer consumed locally caught fish, because of government-issued consumption advisories and associated human health concerns. Muskrat consumption had also declined precipitously, along with muskrat populations, a decline that was attributed to changes in hydrology and contaminant levels associated with the WAC Bennett Dam and the Oil Sands. The only effective alternatives to traditional foods are store-bought foods. …

All participants were worried about ongoing declines in the health and wellbeing of their community. They generally viewed themselves as less healthy than their parents, who rarely got sick. Neurological illnesses (e.g. sleeping disorders, migraines, and stress) were most common followed, in descending order of frequency, by respiratory illnesses (e.g. allergies, asthma) as well as circulatory (e.g. hypertension, coronary) and gastrointestinal (e.g. gallbladder, ulcers) illnesses. Yet, everyone was most concerned about the current and escalating cancer crisis.

A documentary about the research — One River, Many Relations — will be released in October. Here’s a trailer: