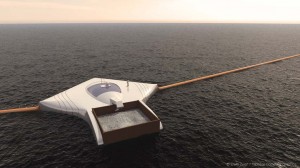 With millions of tons of garbage dumped into the oceans annually and repeat incidence of oil spills like the Deepwater Horizon Disaster, it’s the Ocean which has taken the brunt of unsustainable methods from man. In effect, it’s estimated almost 100,000 marine animals are killed due to debris entanglement and continually rising pollution.

To a degree, individual lessening of consumerism and utilizing sustainable methods to re-use and eliminate waste is very beneficial. However, reducing the already-toxic state of the Earth is the biggest concern of environmentalists and engineers, seeking to utilize the technological advances already available. To this avail, it was 19-year-young Boyan Slat that ingeniously created the Ocean Array Plan, a project that could remove 7,250,000 tons of plastic from the world’s oceans in just five years.

Slat’s idea consists of an anchored network of floating booms and processing platforms that could be dispatched to garbage patches around the world. Working with the flow of nature, his solution to the problematic shifting of trash is to have the array span the radius of a garbage patch, acting as a giant funnel as the ocean moves through it. The angle of the booms would force plastic in the direction of the platforms, where it would be separated from smaller forms, such as plankton, and be filtered and stored for recycling. The issue of by-catches, killing life forms in the procedure of cleaning trash, can be virtually eliminated by using booms instead of nets and it will result in a larger areas covered. Because of trash’s density compared to larger sea animals, the use of booms will allow creatures to swim under the booms unaffected, reducing wildlife death substantially.

Economically, the Ocean Array Project also rises to the top due to its sustainable construct; it’s completely self-supportive, by receiving energy from the sun, currents, and waves. By also letting the platforms’ wings sway like an actual manta ray, contact with inlets in the roughest weather can be ensured. It’s a plan that merges environmental safety with thoroughly thought out processes.

Inspired to tackle global issues of sustainability, Boyan began by launching a project at school that analyzed the size and amount of plastic particles in the ocean’s garbage patches; his final paper went on to win several prizes, including Best Technical Design 2012 at the Delft University of Technology. Continuing the development of his concept during the summer of 2012, he revealed it several months later at TEDxDelft2012.

Slat took his well-planned project further by then founding The Ocean Cleanup Foundation, a non-profit organization responsible for the development of proposed technologies. Aside from saving thousands of animals and reducing chemicals (like PCB and DDT) from building up in the food chain, it could also save millions of dollars a year due to clean-up costs, lost tourism, and damage to marine vessels. His undeterred passion to create healthier oceans has possibility to beneficially impact the lives of the entire world.

Although extensive feasibility studies are currently being conducted, it has been estimated that through the selling of plastic retrieved over the five years, the money would surpass the initial cost to execute the project. In other words, it may even be potentially profitable. Because the main deterrent to implement large scale cleanup projects is due to the financial cost, this solution could perhaps pave ways for future innovations of global cleanup to also be invented.

While the project process would take five years, it’s a span that could continue to increase the world’s awareness of garbage patches, as well as the importance of recycling and reducing consumption of plastic packaging.

To find out more about the project and to contribute, click here.