An Irish company building turbines for the Snohomish PUD visited Everett to discuss the potential for a plant here. 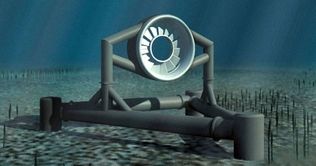 An Irish company that builds tidal-power turbines is exploring the possibility of locating a plant in Western Washington — possibly in Everett.

Representatives of OpenHydro of Dublin visited Everett last week to discuss their technology with political and business leaders from Snohomish County, the region and the state.

The Snohomish County Public Utility District has applied with the federal government for a license to start an experimental tidal-power project in Admiralty Inlet between Fort Casey State Park and Port Townsend.

If the $20 million project is approved — a decision could come this summer — the PUD would buy two turbines from OpenHydro.

A majority interest in the Irish company was recently bought by DCNS, a maritime manufacturer based in Paris. OpenHydro will retain its name as a subsidy of the French company, according to an announcement by DCNS.

“They wanted to meet with the movers and shakers in the economic development community in Puget Sound,” he said.

OpenHydro, in business since 2004, has installed turbines off the Orkney Islands in Scotland; the Bay of Fundy in Nova Scotia, Canada, and near Brittany in France.

The company is planning new projects in the Orkneys and off the northern coast of Ireland, OpenHydro chief executive officer James Ives said in an email.

“As the turbine manufacturing requirements are of a large scale, OpenHydro plans on assembling all turbines as close to the deployment locations as possible,” he said.

Ives said the company is impressed by Snohomish County’s high-tech industry, including, but not limited to, Boeing.

“The region’s long history of high-specification engineering means that the skills, supply chain and infrastructure necessary to support this type of manufacturing activity are clearly available,” he said.

Stephanson said he made a pitch for Everett in particular.

“I just wanted to make sure they knew we had a nice deep-water port,” he said.

Ives said tidal turbines, electrical equipment and the steel base foundations for the turbines would be manufactured at the new plant. He estimated 300 jobs would be directly created and 600 spinoff positions would result from a plant turning out 100 generators per year.

In addition to tidal-power turbines, DCNS is experimenting with other technologies, including floating wind-turbine platforms, ocean-wave energy and a system that converts temperature changes in the ocean into energy, according to the company’s website.

Stephanson said he’s excited about the tidal-power technology in particular.

“It’s one more very positive opportunity for our part of the world, for growing the economy and jobs,” he said.

Cooper of the economic group said he was impressed by OpenHydro’s presentation.

“This is cutting edge stuff,” he said.

Cooper said plenty of good words were put in for Snohomish County.

“This was more a matter of establishing relationships and introducing people in the region,” he said. “I think the initial contacts have been made. We wanted to convey a welcoming presence, and I think we were successful in doing that.”

In the PUD’s project, the turbines would be placed in a flat area 200 feet underwater. Each circular turbine resembles a giant fan, sitting about 65 feet high on a triangular platform with dimensions of about 100 feet by 85 feet.

Together, the two turbines would generate about enough power for 450 homes at peak output. If the project goes well, the system could grow, PUD officials said.

The project is opposed by three Indian tribes, a cable company and a cable trade group.

The tribes, including the Tulalips, say the turbines could interfere with fishing. The cable interests believe the project could damage trans-Pacific cables that run through the inlet.

The turbines would be placed about 575 and 770 feet from fiber-optic cables owned by Pacific Crossing of Danville, Calif. The cables extend more than 13,000 miles in a loop from Harbour Pointe in Mukilteo to Ajigaura and Shima, Japan, and Grover Beach, Calif.

A federal study recently concluded the project would not affect fishing or the cables.