“USDA has leveraged partnerships to accomplish a great deal on America’s wetlands over the past two decades, Vilsack said. “This year’s funding will help strengthen these partnerships and achieve greater wetland acreage throughout the nation.”

Funding will be provided through the Wetland Reserve Enhancement Partnership (WREP), a special enrollment option under the Agricultural Conservation Easement Program’s Wetland Reserve Easement component. It is administered by the Natural Resources Conservation Service (NRCS). Under WREP, states, local units of governments, non-governmental organizations and American Indian tribes collaborate with USDA through cooperative and partnership agreements. These partners work with willing tribal and private landowners who voluntarily enroll eligible land into easements to protect, restore and enhance wetlands on their properties. WREP was created through the 2014 Farm Bill and was formerly known as the Wetlands Reserve Enhancement Program.

Wetland reserve easements allow landowners to successfully enhance and protect habitat for wildlife on their lands, reduce impacts from flooding, recharge groundwater and provide outdoor recreational and educational opportunities. The voluntary nature of NRCS’ easement programs allows effective integration of wetland restoration on working landscapes, providing benefits to farmers and ranchers who enroll in the program, as well as benefits to the local and rural communities where the wetlands exist.

Proposals must be submitted to NRCS state offices by July 31, 2015. Projects can range from individual to watershed-wide to ecosystem-wide. Under a similar program in the 2008 Farm Bill, NRCS and its partners entered into 272 easements that enrolled more than 44,020 acres of wetlands from 2009 through 2013. Most of these agreements occurred through the Mississippi River Basin Healthy Watersheds Initiative (MRBI). Through partnerships, MRBI identifies high-priority watersheds where focused conservation on agricultural land can make the most gains in improving local, state and regional water quality. The new collaborative WREP will build on those successes by providing the financial and technical assistance necessary for states, non-governmental organizations and tribes to leverage resources to restore and protect wetlands and wildlife habitat.

Through WREP, NRCS will sign multi-year agreements with partners to leverage resources, including funding, to achieve maximum wetland restoration, protection and enhancement and to create optimum wildlife habitat on enrolled acres. WREP partners are required to contribute a funding match for financial or technical assistance. These partners work directly with eligible landowners interested in enrolling their agricultural land into conservation wetland easements.

Today’s announcement builds on the roughly $332 million USDA has announced this year to protect and restore agricultural working lands, grasslands and wetlands. Collectively, NRCS’s easement programs help productive farm, ranch and tribal lands remain in agriculture and protect the nation’s critical wetlands and grasslands, home to diverse wildlife and plant species. Under the former Wetlands Reserve Program, private landowners, tribes and entities such as land trusts and conservation organizations enrolled 2.7 million acres through 14,500 agreements for a total NRCS and partner investment of $4.3 billion in financial and technical assistance.

The funding announced today was authorized by the 2014 Farm Bill, which builds on historic economic gains in rural America over the past six years, while achieving meaningful reform and billions of dollars in savings for taxpayers. Since enactment, USDA has made significant progress to implement each provision of this critical legislation, including providing disaster relief to farmers and ranchers; strengthening risk management tools; expanding access to rural credit; funding critical research; establishing innovative public-private conservation partnerships; developing new markets for rural-made products; and investing in infrastructure, housing, and community facilities to help improve quality of life in rural America. For more information, visit www.usda.gov/farmbill. 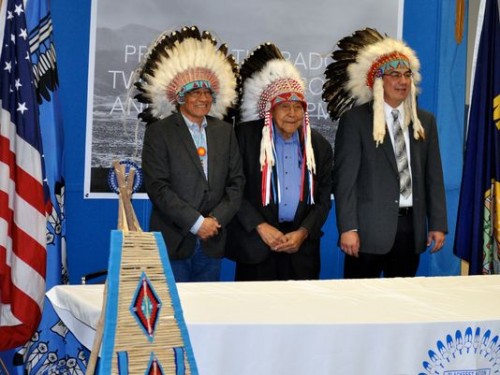 The Blackfeet Tribe and National Congress of American Indians (NCAI) announced a campaign Wednesday to cancel the remaining oil and gas leases within the Badger-Two Medicine area.

The rock band Pearl Jam and member Jeff Ament, who originally is from Big Sandy, will be reaching out to their supporters to encourage them to join the campaign, it was announced during a news conference.

The 165,588-acre area is almost entirely within roads and features mountains, ridges, river valleys and wetlands along the Rocky Mountain Front.

The area has 47 oil and gas leases that the Blackfeet and NCAI contend were illegally granted more than 30 years ago without tribal consultation. Today, 18 leases remain. In 2013, Solonex LLC filed a lawsuit against the U.S. government to begin drilling in the area.

The Blackfeet announced a campaign to urge Congress, President Barack Obama and federal agencies to cancel all remaining leases in the Badger-Two Medicine, which is located at the intersection of the Blackfeet Indian Reservation, Glacier National Park and the Bob Marshall Wilderness.

Tyson Running Wolf, secretary of the Blackfeet Tribal Business Council, said drilling in the lands that are at the heart of the tribe’s creation story with so much cultural significance is not an option. The tribe will be putting the full weight of a growing alliance behind efforts to stop drilling, he said.

“The Badger-Two Medicine is a sacred place where the Blackfeet people gather food and medicine,” Running Wolf said.

Old Person led the announcement with a prayer.

Tribal members have been struggling with the possibility of development in the Badger-Two Medicine for awhile, he said. Past leaders of the tribe said wars of the future would not only be with bows and arrows, he said.

Running Wolf said the Blackfeet Nation has been fighting to protect the area for more than 30 years. Under the Reagan administration, 47 oil and gas leases were illegally issued without consulting the tribe, he said. With the announcement, the full weight of the tribe and a growing alliance is behind the effort.

“We will never let this happen,” Running Wolf said.

Murray said the campaign will include billboards and a website, badger-twomedicine.org. There also is a petition on change.org asking Interior Secretary Sally Jewell and Agriculture Secretary Tom Vilsack to cancel the leases.

The tribe also is reaching out to faith and business communities and national environmental organizations to bring their voices to millions of people around the nation.

Ament, of Pearl Jam, will be helping out as well on social media.

“We’re going to be mobilizing his resources to get the message out about the Badger-Two Medicine,” he said.

Ament, bass player for Seattle-based Pearl Jam, issued a statement through the tribe.

“The Blackfeet Nation sits on the front range of the Rocky Mountains of Glacier National Park, one of the most spiritual and beautiful spots in Montana,” Ament said. “Drilling for oil and gas has no place in the Badger-Two Medicine. Clean water and clean air are precious resources that hold the key to the future of the Blackfeet people and all Montanans. Please cancel the leases in the Badger-Two Medicine.”

On its Facebook page, Pearl Jam urged its followers to join the Blackfeet Nation to protect Badger-Two Medicine region that included a picture of Ament and U.S.Sen Jon Tester, D-Mont.

“NCAI has requested that the Department of the Interior consult with the tribe on the Badger-Two Medicine, and we are hopeful that the agency will move to cancel all remaining oil and gas leases that threaten the area’s preservation,” she said.

“Parents and teachers work hard to instill healthy eating habits in our kids, and these efforts should be supported when kids walk through the schoolhouse door,” said Agriculture Secretary Tom Vilsack. “Good nutrition lays the groundwork for good health and academic success. Providing healthy options throughout school cafeterias, vending machines, and snack bars will complement the gains made with the new, healthy standards for school breakfast and lunch so the healthy choice is the easy choice for our kids.”

The Healthy, Hunger-Free Kids Act of 2010 requires USDA to establish nutrition standards for all foods sold in schools — beyond the federally-supported school meals programs. The “Smart Snacks in School” proposed rule, to be published soon in the Federal Register, is the first step in the process to create national standards. The new proposed standards draw on recommendations from the Institute of Medicine, existing voluntary standards already implemented by thousands of schools around the country, and healthy food and beverage offerings already available in the marketplace.

Highlights of USDA’s proposal include:

The public is encouraged to review the proposal and to provide comments and information for consideration by USDA. The text of the proposed rule is available at http://www.fns.usda.gov/cga/020113-snacks.pdf . Once the rule is published in the Federal Register, which is expected next week, the public will be able to provide feedback through http://www.regulations.gov/. USDA will seek public comment on the proposal for 60 days.

Earlier this week, the Centers for Disease Control and Prevention (CDC) issued a report that analyzed state policies for food and beverages served outside the school lunch line which noted that 39 states already have a state law, regulation or policy in place related to the sale or availability of snack foods and beverages in schools. In many cases, local level (district and school) policies and practices exceeded state requirements or recommendations. USDA’s proposal would establish a national baseline of these standards, with the overall goal of improving the health and nutrition of our kids.

These proposed standards are part of a bi-partisan package of changes passed by Congress in 2010 designed to ensure that students have healthy options in school. Other parts of that package include updated nutrition standards for federally-subsidized school meals that provide children more fruits, vegetables, and whole grains; additional funding for schools to support improved meals; and guidance on stronger local wellness policies.

Collectively these policies will help combat child hunger and obesity and improve the health and nutrition of the nation’s children; a top priority for the Obama Administration. The proposed rule announced today is an important component of First Lady Michelle Obama’s Let’s Move! initiative to combat the challenge of childhood obesity.

For more information on the proposed rule, visit: http://www.fns.usda.gov/cga/020113-qas.pdf