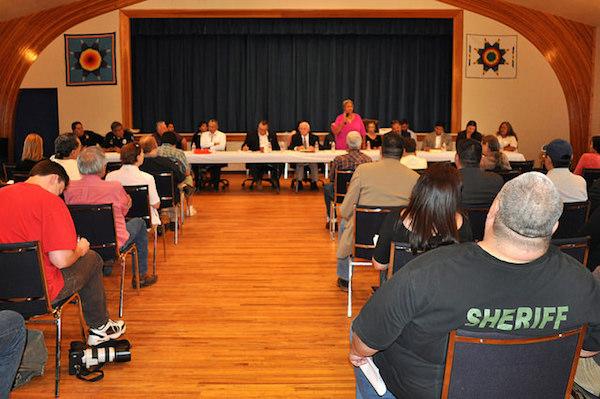 Courtesy Sen. Jon Tester/Flickr
About 100 people gathered for a listening session with Sen. Jon Tester on August 28 to discuss the increased trafficking of mostly young girls and women in Indian country.

As the trafficking of Native women and girls becomes more prevalent in an expanding radius around the Bakken oil fields of North Dakota, politicians and indigenous leaders are seeking to protect these young victims—and help the survivors heal.

“Human trafficking is a serious issue afflicting our region and much of Indian country. Tribes from Washington State to New York have felt its terrible impact,” said Montana Senator Jon Tester during opening remarks at a listening session he held at Ft. Peck Community College on August 28. “Montana and North Dakota have been especially hard-hit by increases in crime, including human trafficking, due to the explosive influx of people and resources following the oil and gas boom in the Bakken.”

The listening session was aimed at gathering more information from tribal leaders and local law enforcement regarding the spike in sex trafficking of underage girls, as well as other related crimes that have increased since the oil boom began in the Bakken region. Also among the panelists at Thursday’s session was United States Attorney Mike Cotter, who appeared at the event to voice the growing alarm shared by he and his colleagues in Montana, the Dakotas and Wyoming, about the exploding industry of human trafficking involving mostly Native girls aged 12 to 14 who are being sold for sex.

“If you look around the rural regions of Montana, North Dakota, South Dakota and Wyoming, you would not expect to find 12-14 year old girls sold for sex on the Internet, or lured by an adult for sex or forced into a life of servitude by predators to sell their bodies to strangers,” Cotter told the audience of about 100 tribal leaders, community members and law enforcement. “It is hard to imagine but it is here in our region, and this corruption occurs with too much frequency and is more prevalent than one would imagine.”

Cotter underscored the fact that human trafficking is a global, national and regional problem that has snared millions of men, women and children into being trafficked for labor and commercial sex. Situated on the energy-rich Williston Basin, the Bakken Oil Patch is located in North Dakota. Since the energy boom in that state began, crime rates in the multi-state region have also spiked, including sexual violence, domestic violence, multiple murders and an increase in the use of meth and other drugs.

Typically, traffickers target mostly young girls who average between 12 and 14 years in age and are usually from low-income homes where one or both parents are absent. Additionally, many of the girls are already victims of child abuse and neglect, and many are struggling with drug and alcohol abuse. In South Dakota alone, Tester said, at least half of the sex trafficking victims are Native girls. Many of the girls, he said, are lured during times of vulnerability, when they may be homeless or struggling in other ways.

RELATED: Native Girls Are Being Exploited and Destroyed at an Alarming Rate

Native School Girls Should Not Be for Sale on the Street

Tribal leaders across the region have also begun to feel the burden of the crime rates in their own communities, which are often underfunded, understaffed and ill-equipped to take on Mexican cartels, who they say have infiltrated the region and are well-organized and armed with heavy weaponry, including machine guns, which heretofore have been a rarity in the Northern Plains. The Fort Peck Indian Reservation, for example, is located approximately two and a half hours west of the Bakken region. Still, their tribal chairman said, his community is feeling the downside of the boom.

“Because of our proximity to the Bakken oil field, we are already seeing the negative effects of oil and gas development without any financial benefits,” Chairman Rusty Stafne of the Fort Peck Tribes of Montana, told the audience. “Washington has been quick to promote the exploitation of natural resources, but slow to provide the necessary funding for the increased demand on our services and infrastructure.”

“Adding to the problem is the lack of treatment available to survivors,” said Tester. “The survivors are often children or young adults from impoverished homes with broken family ties. Help for them is rarely available in the Native community—or even within a manageable drive.”

The negative impacts of the rise in crime is also being felt among tribes in South Dakota and Wyoming, both of whom have had an increase in the trafficking of their young girls.

“Energy development is bringing tremendous new opportunities to the region, but with the good comes the bad,” said Tester. “Many of the small towns on reservations and surrounding areas are being inundated with new businesses and more jobs, but also with infrastructure challenges and bad actors attracted to the profits and free-wheeling environment.”

“As Chairman of the Senate Committee on Indian Affairs, I am very aware of the economic and social challenges facing the tribes in the region. And it’s understandable that no tribe is prepared to deal with the rapid changes affecting the Bakken,” said Tester. “Tribal police departments lack the resources to investigate and detain human trafficking offenders, most of whom are non-Native. By no fault of their own, departments are often ill-equipped to root out the players in trafficking rings that can span reservation, state, and national boundaries.”

Tester added that even though the passage of the Violence Against Women Act had allowed tribes more authority to prosecute crimes committed on Indian reservations by non-Indians, “there is so much more to do.”