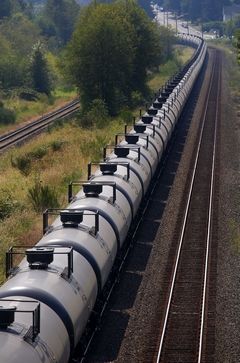 Mark Mulligan / The Herald
A train of tank cars — each bearing the placard 1267, denoting that the tank carries crude oil — waits on the tracks going through Everett recently.

EVERETT — A surge in coal and oil trains through Snohomish County is a “coming crisis” which threatens to irreparably damage the quality of life in several communities unless addressed, the mayor of Edmonds warned Friday.

“We all need to acknowledge it is a serious problem,” Earling said in opening comments at an event focused on coal and oil trains in the county. “I view it as a coming crisis and one we need to start taking care of today.”

The forum on the county campus began with supporters and opponents of the proposed Gateway Pacific Terminal politely sparring over the economic good and the ecological bad of building it.

Seattle-based SSA Marine’s proposal for the terminal at Cherry Point is undergoing extensive environmental review now and, if approved, could be operating at full capacity in 2019.

By then, the terminal could be handling about 54 million metric tons of dry bulk commodities per year, most of it coal from the Powder River Basin in Montana.

That would add nine loaded trains per day heading to the terminal and nine empties coming from it. The trains are expected each to be about 1.6 miles long.

Ross Macfarlane, a program manager for Climate Solutions, and Eric de Place, a policy director for Sightline Institute, argued against the terminal, saying it runs counter to efforts by the state to pursue alternative sources of energy.

“It locks us into a dirty energy cycle that is extremely destructive,” de Place said.

But Terry Finn, a consultant with Burlington Northern Santa Fe Railway, and Joseph Ritzman, a vice president of SSA International, countered that rejecting the terminal ignores the market reality that the potential purchaser of the coal, China, will buy coal elsewhere and burn it nonetheless.

“I don’t think it makes one iota of difference” in the world of energy, but it will mean a loss of jobs and economic development for Washington, Finn said.

The duos also disagreed about the threat of coal dust and the risk of derailments.

But it was the potential of more coal and oil trains tying up even more traffic on city streets that seemed foremost on the minds of elected leaders and residents in attendance.

A report issued by the Puget Sound Regional Council in July found that freight rail traffic in Washington is expected to grow 130 percent by 2035 — without the new coal terminal. That would amount to 27 to 31 more trains per day between Seattle and Spokane and up to 10 more per day between Everett and Vancouver, British Columbia.

The report amplified Earling’s concern. The city has two at-grade railroad crossings leading to the waterfront. When trains come through town and the crossing arms go down, access to the waterfront is cut off.

He said a 2005 report done for the city of Edmonds predicted the number of trains passing through the city each day could rise from roughly 35 to 70 by 2020 and 104 by 2030. That study didn’t factor in added rail shipments of coal and crude oil.

Edmonds isn’t the only city with concerns.

The mayors of Marysville, Mukilteo and Snohomish and an Everett city councilman attended Friday. So did Snohomish County Executive John Lovick.

Marysville could endure the most disproportionate impact of the surge in rail traffic because of its numerous at-grade rail crossings. Wait times could increase by as much as 147 percent per day within the city, the regional council study found.

A possible solution is to eliminate at-grade crossings by building overpasses or underpasses, known as “grade-separation” projects. But the regional council report estimates they would cost anywhere from $50 million to $200 million, paid for mostly with public money.

According to federal law, railroads only can be required to contribute up to 5 percent of that cost.

During a question-and-answer period, Reid Shockey of Everett, a member of the Snohomish County Committee for Improved Transportation, pressed Finn on whether BNSF Railway might put up a greater percentage of the cost of grade separation.

Finn said he couldn’t commit BNSF to any figure.

“I think it’s something that is negotiable,” he said.