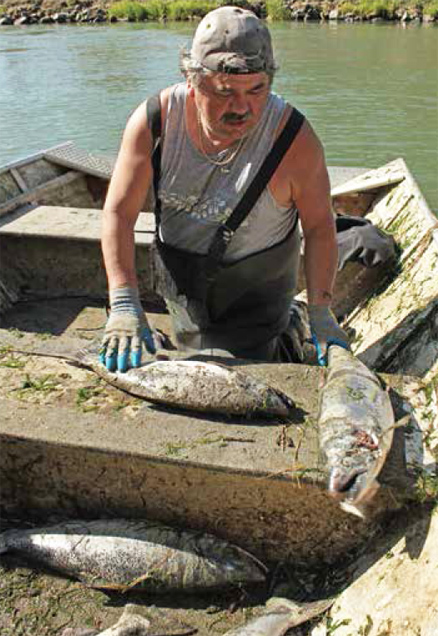 and steelhead stocks. The Nisqually Tribe began using alternative gear a few years ago, and this spring, the Lummi Nation and Upper Skagit Indian Tribe both held tangle net fisheries. Tangle nets are similar to gillnets, but have a smaller mesh size.

The Nisqually Indian Tribe will continue to lower impacts on returning chinook salmon this year.

“To make good on our recent gains in habitat restoration in the Nisqually, fishermen need to decrease how many natural origin chinook are caught,” said David Troutt, natural resources director for the tribe.

In recent years, the tribe has implemented drastic changes to its fishing regime, including a decrease of 15 fishing days since 2004; reducing the number of nets that can be used by a fisherman from three to two; and having just less than a month of mark-selective fishing with tangle nets and beach seines.

This year’s fishing plan will continue implementing mark-selective fishing, but only with beach seines.

“A historically large run of pink salmon is forecast to come in alongside chinook and coho this year,” Troutt said. Tangle

nets – which ensnare fish by their teeth – would catch an un- usually high number of pinks, which tribal fishermen aren’t targeting.

“Since 2004, Nisqually tribal fishermen have already cut hundreds of hours off their chinook season,” Troutt said. “Tribal fishermen are bearing the brunt of conservation for these fish so we can help them recover.”

In a mark-selective fishery, fishermen release natural origin fish that haven’t had their adipose fin removed in a hatchery. The adipose fin is a soft, fleshy fin found on the back behind the dorsal fin. Its removal does not affect the salmon.

“Mark-selective fisheries are a useful tool and the Nisqually is a unique place in western Washington where it could benefit salmon and tribal fisheries,” Troutt said.

Treaty Indian tribes in western Washington are disappointed to learn that the state has filed an appeal in the culvert case ruling.

Federal District Court Judge Ricardo Martinez ruled on March 29 that the state must fix fish-blocking culverts under its roads in western Washington because they violate tribal treaty-reserved fishing rights. The court found that more than 1,500 state culverts deny salmon access to hundreds of miles of good habitat in western Washington, harming salmon at every stage in their life cycle.

“But instead of implementing the ruling as a win-win for the salmon and everyone who lives here, the state has chosen to appeal the case in a further attempt to ignore tribal treaty rights,” Frank said.

As part of his ruling, Martinez issued a permanent injunction against the state’s continued operation of fish-blocking culverts under state roads in western Washington. The injunction was necessary, he ruled, because of the slow pace of state corrections, which has led to an increase in the number of barrier culverts in the past three years. At the current pace, the state would never complete repairs, Judge Martinez said, because more culverts were becoming barriers to salmon than were being fixed.

The state and its Department of Transportation (DOT) were given 17 years to complete repairs. Other state agencies were already planning to have their blocking culverts corrected within the next three years.

Culvert repair cost estimates being provided by the state are higher than the actual repair costs presented in court, Martinez ruled. The state claims that the average cost to replace a state DOT culvert is $2.3 million. But the evidence showed the actual cost of DOT culverts built to the best fish passage standards has been about $658,000. Repairs will be funded through the state’s separate transportation budget and will not come at the expense of education or other social services.

“It’s also important to understand that state law already requires that culverts allow fish passage. The culvert case ruling directs the state to do nothing more than what is already required,” Frank said.

“For decades the state has tried to ignore tribal treaty-reserved rights, even when that means ignoring the best interests of the resource and its citizens,” Frank said. “But the federal courts have consistently upheld our treaty rights.”