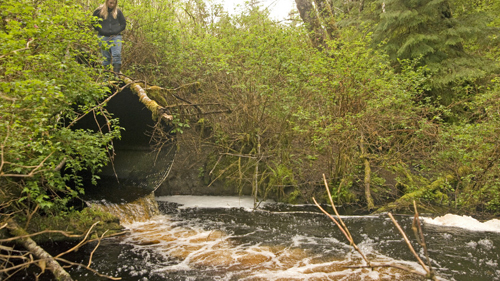 Once again denying tribal treaty-reserved fishing rights – and the many federal court rulings that have consistently upheld those rights – the state of Washington is appealing its latest defeat in a case brought by western Washington tribes in 2001 to force repair of hundreds of salmon-blocking culverts under state roads.

Oral arguments for the appeal will be heard tomorrow, October 16 in the Ninth Circuit Court of Appeals in Seattle. The appeal stems from a 2013 ruling by Judge Ricardo Martinez, who issued a permanent injunction requiring the state to repair more than 800 state-owned fish-blocking culverts over the next 15 years. Also at issue is a 2007 decision in favor of the tribes in which Martinez ruled the state’s obligation to fix culverts stems from the treaty right to take fish. The tribes, state, and federal government tried for several years to settle the case, but were unable to reach agreement.

“Our treaty-reserved right to harvest salmon includes the right to have those salmon protected so that they are available for harvest, not only by the tribes, but by everyone,” said Lorraine Loomis, chair of the Northwest Indian Fisheries Commission. “Our treaty rights are at risk because we are losing salmon habitat faster than it can be restored. Without habitat, we have no fish. If we have no fish, we have lost our treaty right, and our culture and economies will be destroyed.”

Tribes reserved the right to harvest salmon in treaties with the United States government more than 150 years ago, in exchange for which the tribes ceded the vast majority of their homeland to allow non-Indian settlement. The treaty fishing right was upheld in U.S. v. Washington, the 1974 ruling that recognized the tribal right to half of the harvestable salmon returning to state waters and established the tribes as co-managers of the resource with the state.

In great part due to loss of habitat, salmon populations have rapidly and continually declined for the past several decades. As a result, both Indian and non-Indian fishermen have suffered from greatly reduced harvests. “We all stand to lose if we cannot protect the salmon’s habitat,” said Loomis. “We were disappointed by the state’s choice to appeal the district court’s decision, especially when restoring salmon benefits Indians and non-Indians alike.”

Blocking culverts deny salmon access to over a thousand miles of good habitat in western Washington streams, affecting the fish in all stages of their life cycle and reducing the number of adult salmon returning to the state by hundreds of thousands of fish. State agencies have consistently told the Legislature that fixing problem culverts is a scientifically sound, cost effective method for increasing natural salmon production. Even so, the state’s sluggish rate of culvert repair meant it would have taken more than 100 years to fix known blocking culverts even as salmon populations continued to decline throughout western Washington.

The injunction forces the state to accelerate the pace of repairs to blocking culverts. Over the past two years, the state agencies have been cooperative in working with the tribes, Loomis said. The Washington Department of Fish and Wildlife, State Parks and Department of Natural Resources have made good progress toward correcting the existing fish blocking culverts, which the injunction requires be fixed by next year. The Washington Department of Transportation is responsible for the majority of failing culverts, which the injunction requires be corrected by 2030. WSDOT’s correction rate is still far too slow, but the Tribes are encouraged by the agency’s recent efforts to re-prioritize funding to bolster culvert corrections and the state Legislature’s increased funding to the agency. Repairs will be funded through the state’s separate transportation budget and will not come at the expense of education or other social services.

The 20 treaty Indian tribes in western Washington always prefer to collaborate rather than litigate to restore and protect salmon and their habitat, Loomis said. “But the state’s unwillingness to work together and solve the problems of these salmon-blocking culverts in a timely manner left us with no alternative except the courts. We hope the Ninth Circuit will fully uphold the district court ruling and that we can move beyond litigation to work cooperatively with the State to protect the salmon resource,” she said.

As we begin our third decade of the annual state and tribal salmon co-managers’ salmon season setting process called North of Falcon, it’s a good time to look at how far we’ve come and talk about our hopes for the future.

There were some tough days in the decade following the 1974 ruling by Judge George Boldt in U.S. v Washington, which upheld tribal treaty-reserved fishing rights and established the tribes as co-managers of the salmon resource with the state of Washington.

At first the state refused to implement the ruling under the mistaken idea that the Boldt decision would be overturned on appeal. There was chaos on the water. It got so bad that Judge Boldt suspended the state’s authority to manage salmon for several months and turned the state’s management authority over to the federal government.

It took time, but gradually the state and tribes learned to trust one another and work together. We realized the value of working cooperatively together to manage the resource rather than spending our time and money on attorneys fighting each other in court.

Out of that need for trust and cooperation, the North of Falcon process was born. It is named after the cape on the Oregon Coast that marks the southern boundary of the management area for fisheries harvesting Washington salmon and it extends north to the Canadian border.

While North of Falcon negotiations begin in earnest this month, the state and tribal co-managers have been hard at work for weeks developing pre-season forecasts, conservation goals and estimates of impacts to specific salmon stock at various levels of fishing effort.

This year the process has a new participant in Jim Unsworth, who recently replaced Phil Anderson as director of the Washington Department of Fish and Wildlife. We look forward to working with him to develop management plans and fishing seasons that will address our salmon recovery goals while providing some fishing opportunity. We will also work with Mr. Unsworth to protect and restore salmon habitat and to properly manage our fish hatcheries that we need to support fishing opportunity.

We have a lot of work to do together in the years ahead to recover salmon and address the many conservation challenges we face. But we know that our communities – and our shared natural resources – are stronger when the co-managers work together.

After all, we have much in common. With the current condition of the degraded habitat in our rivers and marine waters, we all need hatcheries to provide salmon for harvest. We also need good habitat for our fish. Whether hatchery or wild, salmon need plenty of clean, cold water, access to and from the ocean, and good in-stream and nearshore marine habitat where they can feed, rest and grow.

It is the amount and quality of salmon habitat – more than any other factor – that determines the health of the salmon resource. We must carefully manage the habitat, the hatcheries and the fisheries if we are to return salmon to abundant and sustainable levels.  Successful salmon recovery depends on it.