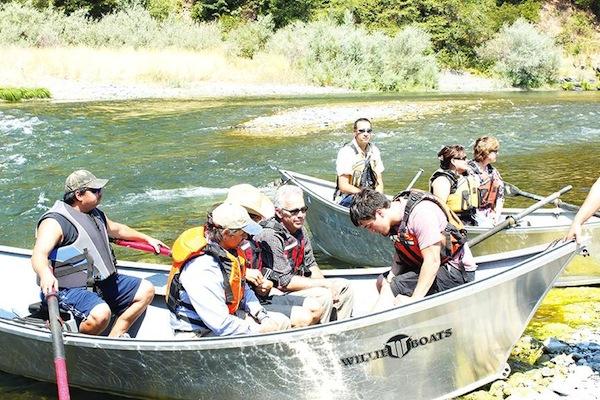 Dropping water levels and rising temperatures in the persistent California drought have tribal members concerned about a fish kill—and, some say, fish are already dying.

The Hoopa Tribe is pressing for a release of water from the Trinity River, which feeds the Klamath. Hundreds of tribal members from the northern coast of California, along with river conservationists, traveled to the state seat in Sacramento on August 19 to urge officials to reconsider their decision to stop pre-emptive water releases.

Yurok, Karuk and Hoopa Valley tribal members joined with people from the Klamath Justice Coalition, coming by the busload, according to the Times-Standard.

It was the second attempt at confronting officials to try and get the message across. On August 11 others showed up in Redding, California, at a press conference on wildfires to ask U.S. Secretary of the Interior Sally Jewell directly to authorize such a move.

Tribal members are looking for a release of Trinity River water out of Lewiston Dam, they said in a release. The Trinity is the Klamath River’s main tributary. They are worried about a fish kill on the scale of one that occurred in 2002, also for lack of water and a too-high temperature. Tens of thousands of otherwise healthy fish died that year, under very similar conditions.

“The Klamath fish kill of 2002 led to poor salmon returns devastating west coast fisheries for years afterward,” said Dania Colegrove, Hoopa Tribal member and activist with the conservation group Got Water, in a statement. “Since then tribes, scientists and the Department of Interior have worked together to avert fish kills by preventively releasing water during drought years.”

Many say they are already seeing dead fish. They fear that a release once that starts happening would not come in time to stop disease from spreading. Though Jewell met with the protesters after the press conference, she did not agree to release water.

“There is an opportunity to do emergency releases, if we see the temperature rise,” Jewell said to the group at the press conference, according to the Times-Standard. “We’ll make sure that people come out and there is an opportunity to see it. We are dealing with profound drought all over. We’re dealing with it in the Klamath. So, I’ll follow up. Also, I want you guys to understand the biggest issue is the lack of water.”

Two days later, though, Jewell sent a federal team to tour the river along with Hoopa Valley Tribe experts. On August 14, Bureau of Reclamation Regional Director David Murillo and Assistant Regional Director Pablo Arroyave toured the river. In addition the Humboldt County Fifth District Supervisor, Ryan Sundberg, added his voice to that of the Hoopa Valley Tribal Council and Chairperson Danielle Vigil-Masten, calling for immediate water releases into the Trinity River, according to a release from the Hoopa Valley Tribe.

“It affects the economy throughout the county when the fish are threatened,” Sundberg said in the statement. “It’s a diverse County and a diverse Board of Supervisors, but everyone is united on this issue.”