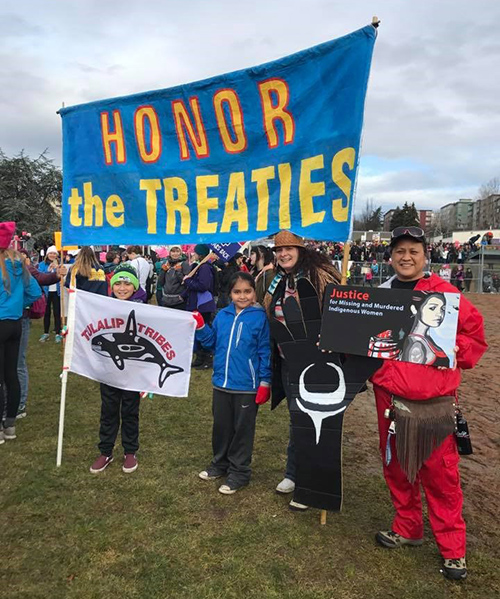 Indigenous women were at the forefront of Seattle’s Women’s March on January 21, 2017.

Donald Trump is President. For many in the Pacific Northwest and throughout Indian Country that is a gut-wrenching fact that will take some time to fully process. But it is a fact of life and we must adapt to a changing political climate like we have always done.

Local Lakota Activist and Marysville School District educator Matt Remle summed it up best when he released the following statement via Facebook on Inauguration Day. “People keep asking how we’re preparing for Trump. I keep responding ‘same way we prepare for any new colonizer in chief.’ Today is the same as yesterday as we continue to protect our lands, protect our water, protect our treaty rights, and fight for our children and future generations. #NoDAPL #BattleforMotherEarth.”

And that’s just it, we as Native people have always been fighting to protect our lands, water, treaty rights and future generations. There’s never been a pause to our fight, no one has ever said let’s take a break from resisting Western assimilation because of whoever happened to be in a local, state, or federal office. We honor our ancestors for their gifts of teachings to be strong, resilient and compassionate every day with every breath we take, just by being able to say we have endured and we are still here.

Now, Donald Trump is President and seemingly by the hour we are getting updates as to how he plans on weakening our treaty rights and depleting our resources. From signing executive orders to revive the Keystone XL and Dakota Access pipelines, to freezing Environmental Protection Agency grants and contracts, to potentially eliminating the Violence Against Women Act, there have been no shortages of offensive and egregious legislative actions being aimed at the tribes by the Trump Administration.

However, none of this should come as any shock or surprise. It’s all been completely in line with who we know him to be and what we know him to stand for. If anything, it’s surprising to see a President follow through on several key promises he made during his campaign as quickly as Trump is.

The moment Trump took office and became the 45th President, the White House website received a digital makeover to reflect the values and missions of the Trump Administration. As a result, White House policies on several high-stake issues were no longer available. One such issue was climate change, an issue that is critically important to the health of the world, but not so important to our President who routinely refers to climate change as “a hoax”.

What took the place of climate change policy is what’s titled An America First Energy Plan. The plan in its entirety is posted at the end of this article. There are some fascinating remarks made within this energy plan, such as “President Trump is committed to eliminating harmful and unnecessary policies such as the Climate Action Plan and the Waters of the U.S. rule.”  Then there is this statement as well, “The Trump Administration will embrace the shale oil and gas revolution to bring jobs and prosperity to millions of Americans. We must take advantage of the estimated $50 trillion in untapped shale, oil, and natural gas reserves, especially those on federal lands that the American people own.”

“Trump’s plan is not a surprise – it’s consistent with what he has said throughout the campaign – a no holds barred approach to development of oil, natural gas, and coal, especially on federal lands and under federal waters,” says Libby Nelson, Tulalip Tribes Natural Resources Environmental Policy Analyst. “Climate change policy is seen as ‘harmful’ and there is no mention of ‘renewable energy’ (e.g., wind, solar) in Trump’s energy plan. Lifting environmental regulations, weakening the EPA, and increasing drilling may lead to more jobs and more revenue in the short term, but at what cost? At the cost of healthy, functioning and yes, economically valuable natural ecosystems that we need to sustain us long after the ‘shale oil revolution’. We will need to watch carefully as this new administration begins to translate its energy policy to proposed actions on the ground, and be prepared to act on behalf of the environment and tribal interests.”

So we will continue to watch and listen carefully as Trump continues to follow through on promises he made on his campaign trail because he did make these promises, but many didn’t listen. Now he’s doing exactly what he promised to do and there are a lot of progressives, our so-called allies, who are complicit in the legislation for policies like the pipelines going forward.

“I honestly believe that this monumental loss of faith in DC is a step in the right direction. No matter the President or who was Senator or Congressperson, DC has always been an obstacle, not an aid to our communities,” stated Native activist and renowned speaker Gyasi Ross via Facebook. “Our solutions are at home. Simple. That is shown by the fact that we have a home, a homeland – our communities were supposed to have been wiped out. Physically. Genocide. Extermination. But we weren’t wiped out and because of that we’re still able to improve, evolve and grow. Of course we can point to dysfunction, but that’s normal. That’s growing pains. We’re learning how to love ourselves again, to believe in ourselves again, to trust us and our own brilliance and spirituality. When we learn that fully, the solutions will be self-evident.

“Our solutions are not in DC and they never have been. If the cavalry was coming, they would have come a long time ago. Marshall would have stopped the Trail of Tears; Obama would have stopped DAPL. Neither one did. It was the thousands of organizers on the ground who did. No saviors. The only meaningful transformation or revolution that will really improve life for our communities will come from our communities, not an outside savior or great white father.”

Indeed, there must be a transformation and necessary resistance to defend against the likes of the Trump Administration and all other levels of government and establishment that seek to exploit the Earth and weaken our treaty rights. That resistance has been ongoing for the Tulalip Tribes because, again, organizations of all sorts have sought to lay claim to our lands, waters, and way of life long before Trump.

“The Tulalip Tribes has been legally fighting against any coal, oil, pipeline, or anything else that will ruin our Mother Earth and negatively impact our fresh water, our air quality, and our salt water,” says Theresa Sheldon, Tulalip Board of Director. “We will continue to oppose any policy or legislation that may make it easier for the federal government to exploit our lands and our way of life.

“As we go into a Republican Presidency with a Republican Congress, please do not lose faith. Treaty rights are not party based. The Point Elliott Treaty does not belong in the republican camp or democrat camp. Our issues are independent from party, but based in the fact that treaties are the Supreme Law of the Land as stated in the U.S. Constitution. We will continue to work with this new administration to educate them on our rights and we will fight hard to protect our rights as the Indigenous peoples of this country. May we stand together and support each other. Do not get distracted with the noise and rhetoric of two parties, but find balance in our teachings and in our way of life as our ancestors have always done.”

Within minutes of Donald Trump’s swearing in as 45th president of the Unites States, the pages on climate change, previously found on whitehouse.org, went dark. They were replaced with the following on a page dedicated to an energy plan.

Energy is an essential part of American life and a staple of the world economy. The Trump Administration is committed to energy policies that lower costs for hardworking Americans and maximize the use of American resources, freeing us from dependence on foreign oil.

For too long, we’ve been held back by burdensome regulations on our energy industry. President Trump is committed to eliminating harmful and unnecessary policies such as the Climate Action Plan and the Waters of the U.S. rule. Lifting these restrictions will greatly help American workers, increasing wages by more than $30 billion over the next 7 years.

Sound energy policy begins with the recognition that we have vast untapped domestic energy reserves right here in America. The Trump Administration will embrace the shale oil and gas revolution to bring jobs and prosperity to millions of Americans. We must take advantage of the estimated $50 trillion in untapped shale, oil, and natural gas reserves, especially those on federal lands that the American people own. We will use the revenues from energy production to rebuild our roads, schools, bridges and public infrastructure. Less expensive energy will be a big boost to American agriculture, as well.

The Trump Administration is also committed to clean coal technology, and to reviving America’s coal industry, which has been hurting for too long.

In addition to being good for our economy, boosting domestic energy production is in America’s national security interest. President Trump is committed to achieving energy independence from the OPEC cartel and any nations hostile to our interests. At the same time, we will work with our Gulf allies to develop a positive energy relationship as part of our anti-terrorism strategy.

Lastly, our need for energy must go hand-in-hand with responsible stewardship of the environment. Protecting clean air and clean water, conserving our natural habitats, and preserving our natural reserves and resources will remain a high priority. President Trump will refocus the EPA on its essential mission of protecting our air and water.

A brighter future depends on energy policies that stimulate our economy, ensure our security, and protect our health. Under the Trump Administration’s energy policies, that future can become a reality.