A controversial casino development in the West Valley is taking a big step forward.

The U.S. Department of the Interior is notifying Arizona lawmakers and other Native American communities that it is looking favorably on an effort by the Tohono O’odham Nation to take a parcel of land at 91st and Northern avenues into trust. The Southern Arizona tribe wants to develop a $500 million casino on the parcel.

This move sets the stage for full federal approval, according to an official familiar with the casino plans.

“The handwriting is on the wall,” the official said.

U.S. Department of the Interior Assistant Secretary of Indian Affairs Kevin Washburn told other tribes of his decision to approve the O’odham’s application for the land to be an extended part of their reservation.

This would propel the casino toward construction after a prolonged legal fight.

“Today’s ruling by the Department of the Interior allows the Nation to move another step closer to benefiting from the United States’ promise to the Nation that we would be able to replace our destroyed reservation lands. The Nation is eager to move forward to use our replacement land to create thousands of new jobs in the West Valley,” Tohono O’odham Nation Chairman Ned Norris, Jr. said in s statement.

The O’odham casino has faced opposition — including lawsuits and legal appeals — from some state lawmakers as well as the Salt River Pima-Maricopa Indian Community and the Gila River Indian Community. Those two tribes, which already operate casinos in the Phoenix area, cite concerns about the O’odham casino’s impact on state gaming compacts.

A federal 1986 law allows the O’odham to replace lands lost to a federal dam built in Southern Arizona with unincorporated parcels in the Phoenix area. The tribe quietly bought the West Valley parcel in 2003.

The O’odham have prevailed in lawsuits brought against the project, and efforts by U.S. Rep. Trent Franks to change the 1986 law have not progressed in Congress.

Officials involved in the casino scrap were still trying to figure out the implications of the federal actions today.

Interior officials and some Arizona players involved in the issue either could not be reached or declined requests for comment.

““The Community absolutely disagrees with Washburn’s decision for both legal and policy reasons. The Tohono O’odham Nation has asserted a right to create three additional Indian

reservations on county islands in Maricopa County to locate casinos. This is why many Valley mayors have been standing by tribes in asking for a resolution by Congress, fearful that their

city is next,” Enos said.

“While our Community is disappointed by today’s decision, we are not surprised. As Assistant Secretary Washburn noted, he was faced with interpreting an ambiguous provision of a law passed by Congress decades ago. That’s precisely why our Community believes Congress is the best entity to decide this matter and uphold the will of Arizona’s voters. We hope voters across the state will contact their members of Congress to weigh in on this matter.

“It’s also critically important to note that this decision does not give the Tohono O’Odham Nation permission to game on this land. The Department of Interior has yet to decide that point and the majority of tribes in Arizona – including non-gaming tribes – remain opposed to the Nation’s casino because it poses a direct threat to the balance of tribal gaming in our state.

“We will review this decision thoroughly in the coming days and decide whether to take legal action.” 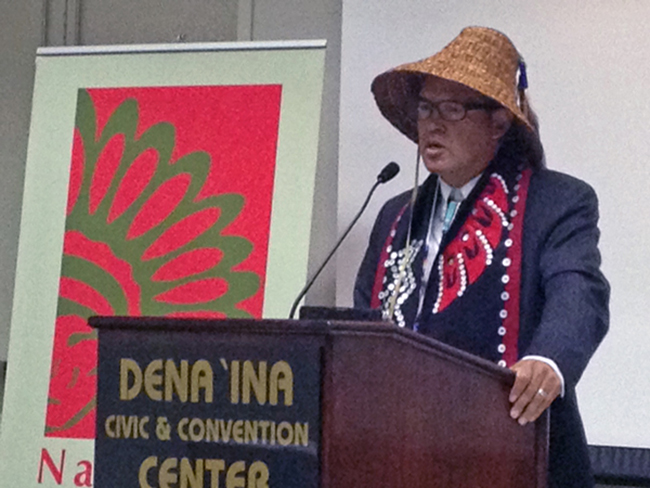 At a wide ranging press conference during day three of the NCAI gathering in Anchorage yesterday, BIA Assistant Secretary for Indian Affairs Kevin Washburn said the concept of taking land into trust for Alaska tribes is a popular one.

“Even though we don’t have a rule in place that allows it, we have applications,” Washburn said.

A recent DC district court decision affirmed the Interior department’s authority to take Alaska tribal lands into trust if tribes request it and the Secretary of Interior approves the request. Washburn said although the decision is being appealed, the court was clear in the assertion. He said the issue is also supported by two other entities.

“One from the secretarial commission on trust reform, which was set up at the department of Interior and it’s a blue ribbon panel of outside independent experts, who said we think this would be a good idea,” Washburn said. ”We also heard from the Indian Law and Order Commission which set a whole chapter on Alaska because they were looking at issues for Indian Law and Order all over the country but the issues in Alaska are very serious and so they set aside chapter two.” 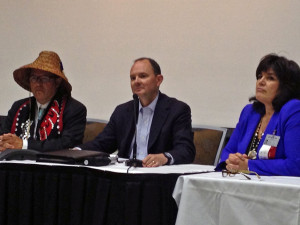 Trust status for Native lands would allow more tribal authority and jurisdiction over certain criminal behavior on those trust lands. The Indian Law and Order Commission sees it as a way to better address the high rates of domestic violence and sexual assault in Alaska Native communities.

Ravalli comments leave tribal elders thinking of the past

Confederated Salish and Kootenai tribal elder Tony Incashola Sr. says that despite experiencing racism from the time he was a child growing up in the 1950s on the Flathead Indian Reservation, he couldn’t help feeling surprised by a Ravalli County official’s portrayal of American Indians during a public meeting last month as drunken lawbreakers.

“I guess I shouldn’t be,” Incashola, 67, says. “I’ve lived with that all of my life … When I was a kid, it was like standing at a department store on the outside looking in. You see the non-Indian children having fun. You felt like an outsider, that you weren’t welcome, because you didn’t dress right and you had a different color.”

Incashola, who serves as director of the Salish-Pend d’Orielle Culture Committee, has dedicated much of his life to fostering an understanding of indigenous ways. Education breeds familiarity, he says. Familiarity helps break down the fear that breeds racism. Efforts such as his are paying off. Incashola says that racism is less apparent than when he was young. That makes the Nov. 20 meeting in Ravalli County all the more troubling.

The meeting involved a discussion between CSKT delegates and the Ravalli County Board of Commissioners about how best to care for a historic Bitterroot Valley property known as Medicine Tree that the Salish have considered sacred for hundreds of years. CSKT wants to transfer the property from tribal ownership into federal trust with the Bureau of Indian Affairs. CSKT representatives stated that the 58-acre parcel is central to Salish creation stories, ones that detail how “Coyote,” a being imbued by the creator with special powers, made the land “safe for humans yet to come,” Incashola says.

When explaining the importance of such a transfer, the CSKT say that the Medicine Tree parcel provides a connection to indigenous history—a link that helps preserve a strong sense of tribal identity. The CSKT add that the transaction will help grow their land base and, therefore, give them a more powerful voice when negotiating their rights and responsibilities with government agencies.

CSKT attorney Teresa Wall-McDonald told the Independent that placing land into trust helps the tribes gain back losses accrued when the federal government opened the Flathead Reservation to non-native homesteaders in 1910. Between 2009 and August 2013 alone, the CSKT placed approximately 81,000 acres into trust.

The Ravalli County Commission, however, has steadily opposed the CSKT’s request. Among the commissioners’ stated concerns is the loss of roughly $800 in property taxes that would result from the transfer. They also worry about the potential impacts of having a pocket of sovereign land set aside within their county, and why the tribes would want to work with the federal government rather than local. At the Nov. 20 meeting, they asked specifically if the tribes intended to erect a casino atop the parcel.

Later during the same meeting, Ravalli County Planning Board Chair Jan Wisniewski warned commissioners of the CSKT’s request, saying that American Indians have a history of using trust lands as a refuge to “get drunk and try and run back into the reservation so they don’t get caught,” according to meeting minutes.

“The county cannot go into that sovereign nation to apprehend the drunken Indians,” he said. “So the jails are full of Indians (sic) which cost us tax dollars. One jail in particular (Havre?) had a count of 58.”

In response to Wisniewski’s testimony and the behavior of the Ravalli County officials, Bitterrooter Pam Small posted an online petition demanding that the commission apologize for the county’s “cultural insensitivity and ignorance” that garnered nearly 500 signatures.

Such criticism helped persuade the commissioners on Nov. 27 to issue an apology to the tribes. Roughly 20 Bitterroot residents attended the meeting, with many of them verbally lashing out at the commissioners, characterizing the county’s overall treatment of the CSKT as “paternalistic” and akin to “an inquisition.”

“The whole tone of this meeting was confrontational,” former Ravalli County attorney George Corn said. “They were grilled by your attorneys … At best it was denigrating. At worst, it implied racism.”

In response to the onslaught, county commissioners say that the Nov. 20 discussion was taken out of context—that they were only attempting to evaluate all possible outcomes that could result from the transfer. “It was in no way condescending or adversarial,” Commissioner Jeff Burrows said last week, before the commission voted to hand-deliver an apology to the tribes.

Wisniewski’s legal advisor, Robert C. Myers, echoes the commissioners when maintaining that his client’s statements were taken out of context. “We don’t know yet fully what was actually said,” he says. “People hear what they think they hear.”

For Incashola, the issue comes back to education and respect. For instance, he says the thought of the tribes placing a casino on Medicine Tree is preposterous and reflects a misunderstanding of the importance the CSKT place on preserving their culture.

The whole back and forth leaves him weary.

“I get so tired of trying to defend my identity, to try to defend my values,” he says. “I feel that what happened in Hamilton is just plain ignorant.”

Incashola says his elders, who faced the worst kind of racism, taught him that there are more good people in the world than bad. He takes some comfort in that thought. In light of what transpired in Ravalli County, however, Incashola isn’t confident that racism will ever completely disappear.