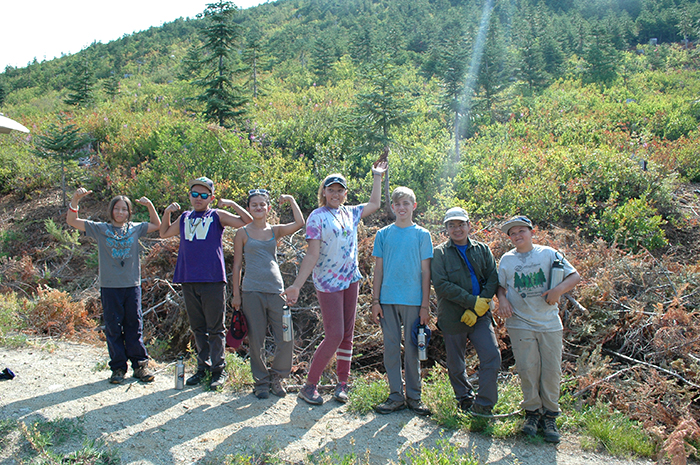 Mountain Camp 2017 kicked off with Kelly Moses storytelling and preparing the kids for their mountain journey, in the longhouse around a fire.

The kids backpacked the first three days into Barlclay Lake where they explored, hiked and stayed cool swimming 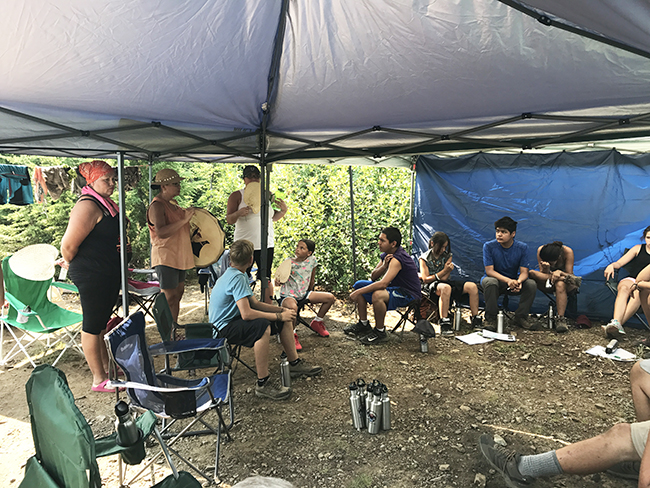 It was hot at 5,000 feet, but nights were just right and skies were starry.  Michelle Myles from the Lushootseed Department and I spent Thursday night at camp, with Michelle telling stories under the stars before bed.  As before, kids learned to set up tents, carry their own gear, cook in the wilderness, conserve water, and support each other, and about their mountain culture.  Once again, Inez Bill helped contribute to the program with her ideas and feedback on our curriculum. 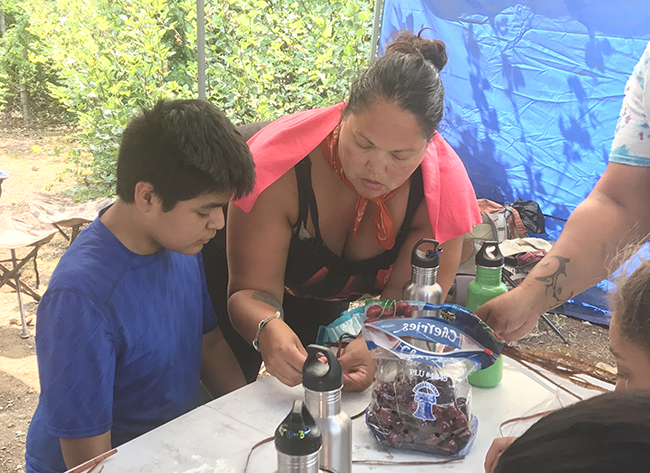 For the first time this year, we ended camp with a river trip. Kids got a lesson in kayaking and suited up for a three-hour downriver trip starting at the bridge in Skykomish.  We contracted with Outdoor Adventure Company of Index, and the kids seemed to love it! 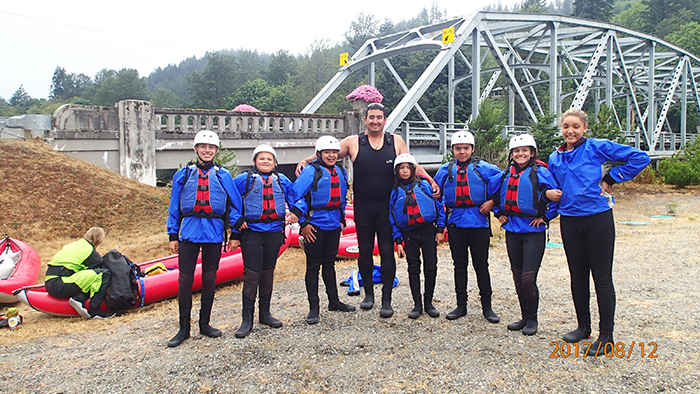 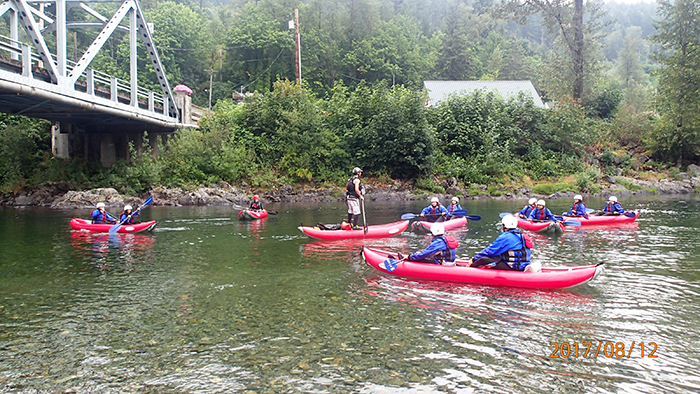 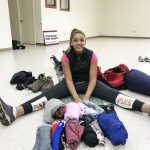 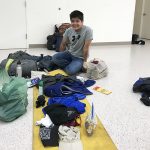 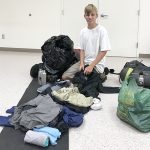 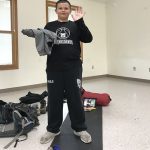 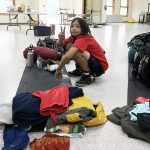 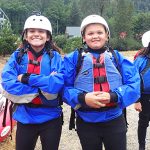 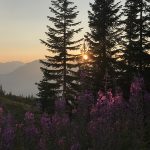 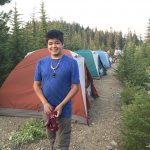 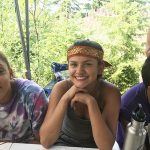 By Brandi N. Montreuil, Tulalip News
Lushootseed teachers braved the 70 degree weather this afternoon to harvest cedar for traditional community use. Collaborating with Tulalip Natural Resources, the teachers were able to gather enough cedar bundles to continue providing cedar roses for use in funerals.
The Lushootseed Department provides 150 roses per funeral service and make them traditionally by hand with good hearts and minds, and receive no profit made for this service. Rocky Renecker, with Tulalip Funeral Services, also harvested cedar on behalf of the funeral services team. 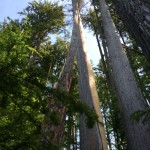 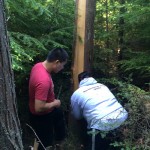 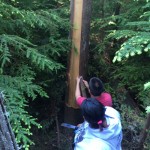 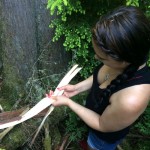 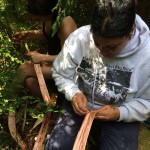 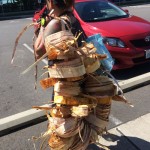 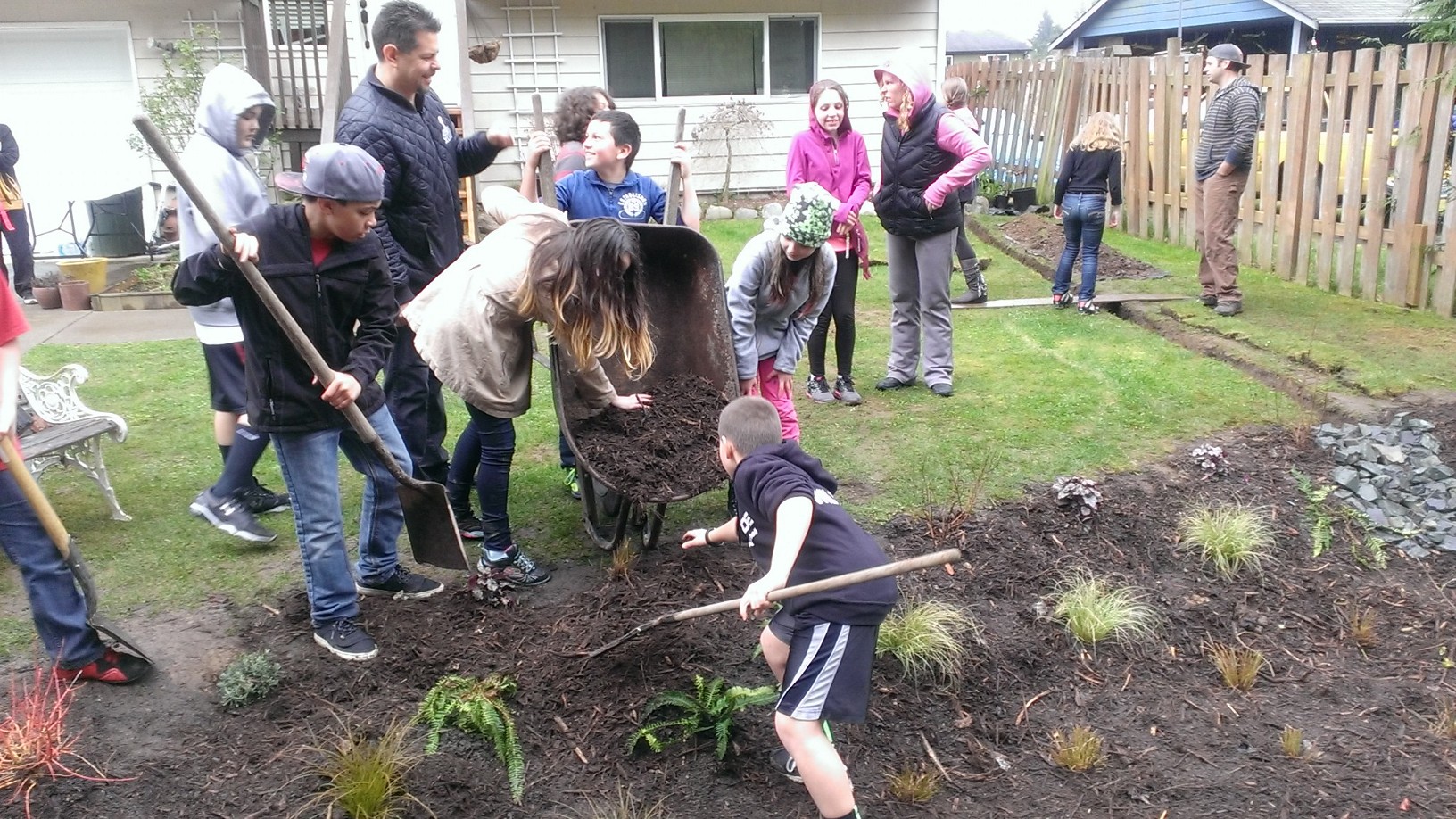 Tulalip, WA -Spring is here and it’s a prime season to put in a rain garden. Imagine your yard with a rain garden that is full of native plants attracting butterflies, hummingbirds and bees. Now envision that same rain garden being low maintenance and capable of preventing flooding or ponding of water in your yard and having the ability to capture pollutants before they reach the Puget Sound. 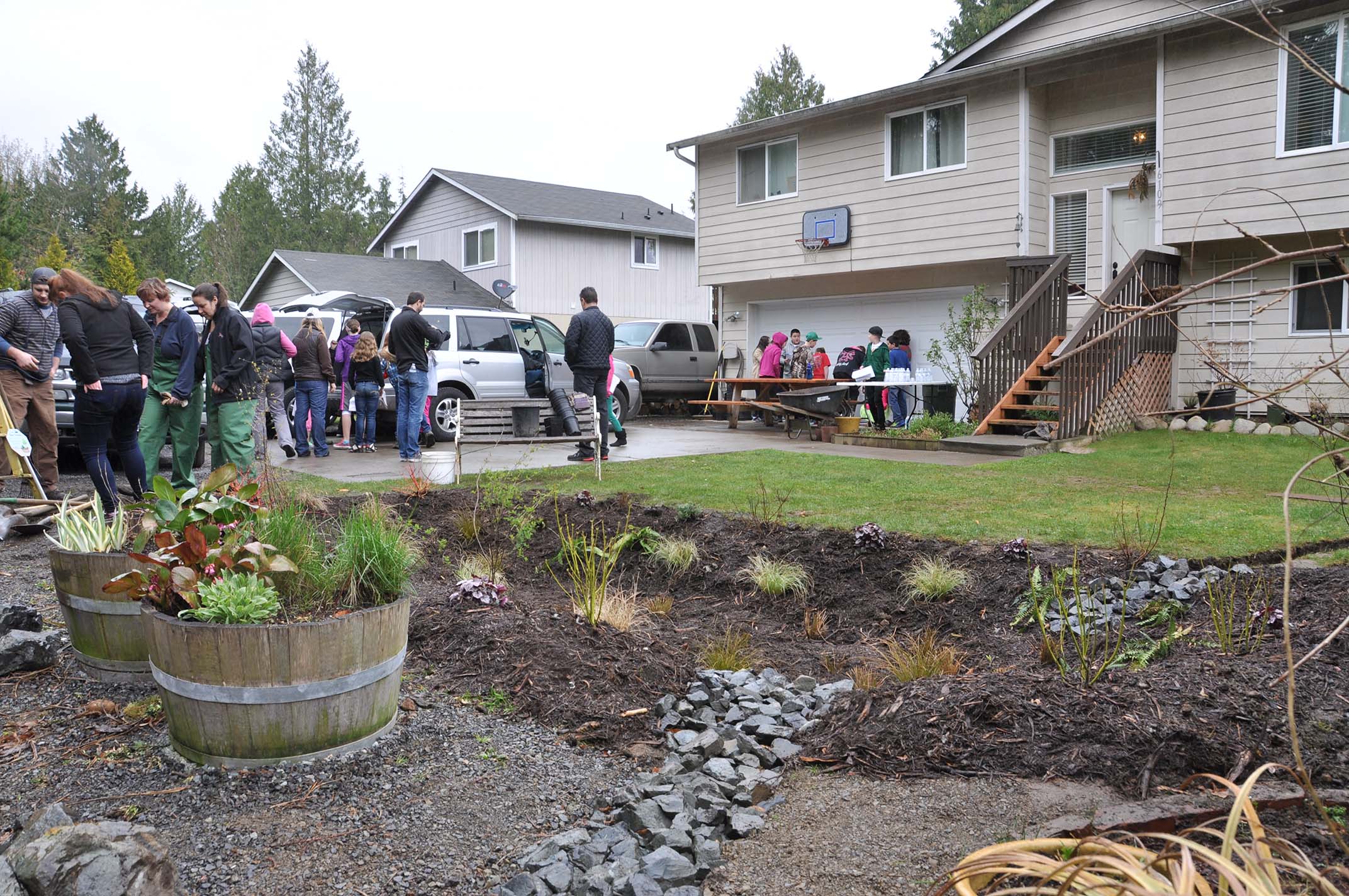 To begin, the Morrison’s had the utility lines in their yard located, estimated the rain garden size, and created a budget. Because the Morrison’s have a raised garden in their backyard they decided to harvest rain water from the back half of their roof into barrels for summer watering. Rain water from the front half will be routed to flow away from the home’s foundation and into the rain garden. 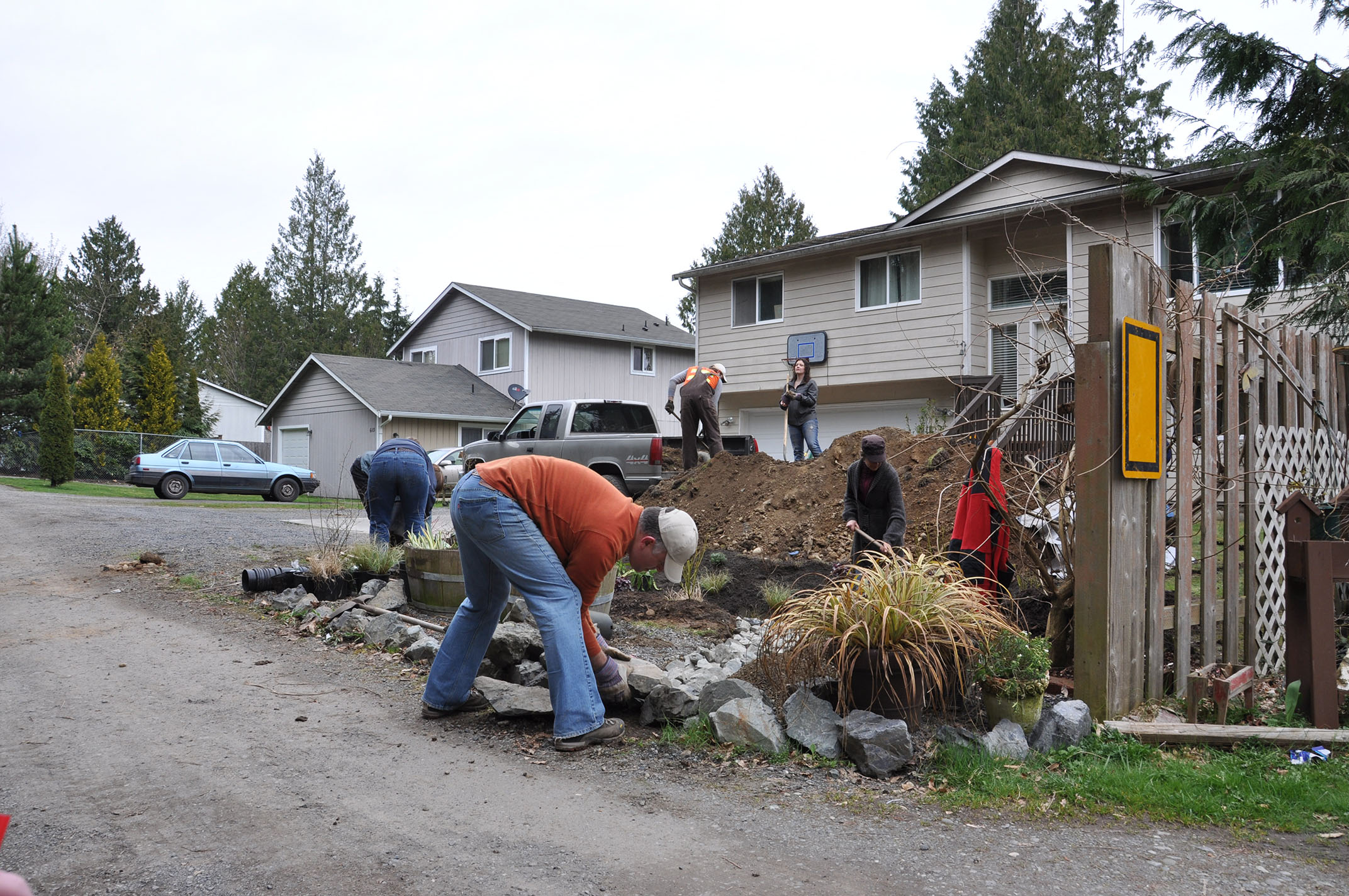 Adding an overflow prevents the water from ponding after flask flooding.            Photo by Monica Brown

There are multiple ways to manage rain water run-off, but the more aesthetically pleasing and environmentally friendly option for homeowners is the addition of a rain garden. From now until 2016 the Puget Sound Rain Garden initiative wants to help install 12,000 rain gardens in the Puget Sound area. The website www.12000raingardens.org, is full of useful information, and local resources along with a place to register your rain garden as part of the initiative to keep the Puget Sound clean.

Tulalip Natural Resources staff is available to help anyone located on the Tulalip reservation with any questions about rain water management and has a free handbook available for pick up. Contact Valerie Streeter of Natural Resources with any questions or for a free Rain Garden Handbook, at 360-716-4629 or by email vstreeter@tulaliptribes-nsn.gov.

Pros of installing a rain garden

Rain Gardens are easy to maintain for years to come since they only require occasional weeding, watering and new mulch every year. If the garden contains native plants they will be easier to care for, cheaper to buy and some attract butterflies, hummingbirds and bees.

Cons of installing a rain garden

Planning and actual installation can take three or 4 weekends. The homeowner will need to create a budget, locate any utility lines on the property and perform a soil test for drainage before you begin. Afterwards, calculate the size and depth of garden for the surface runoff water. 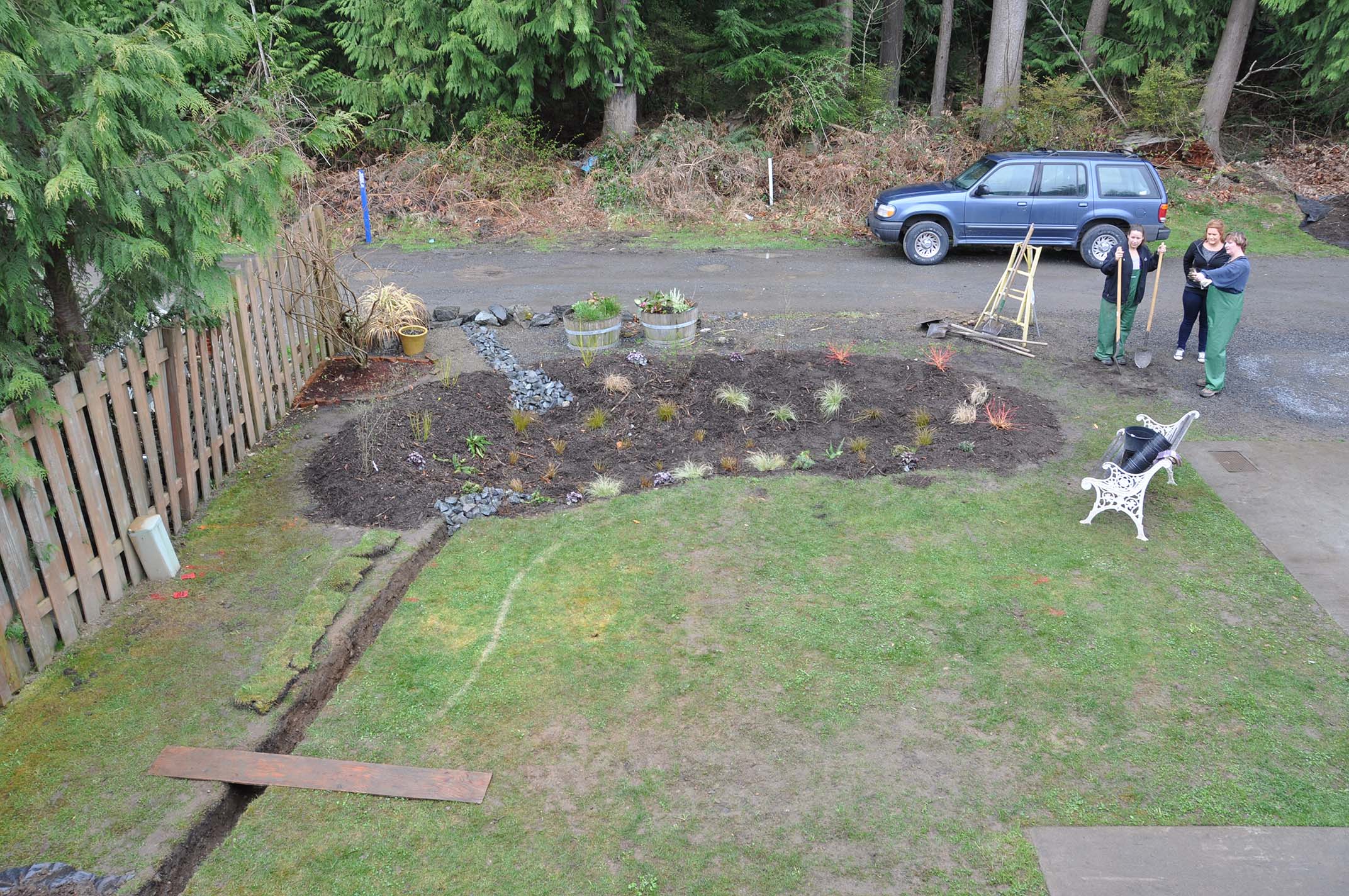 Aerial view of the rain garden
Photo by Monica Brown 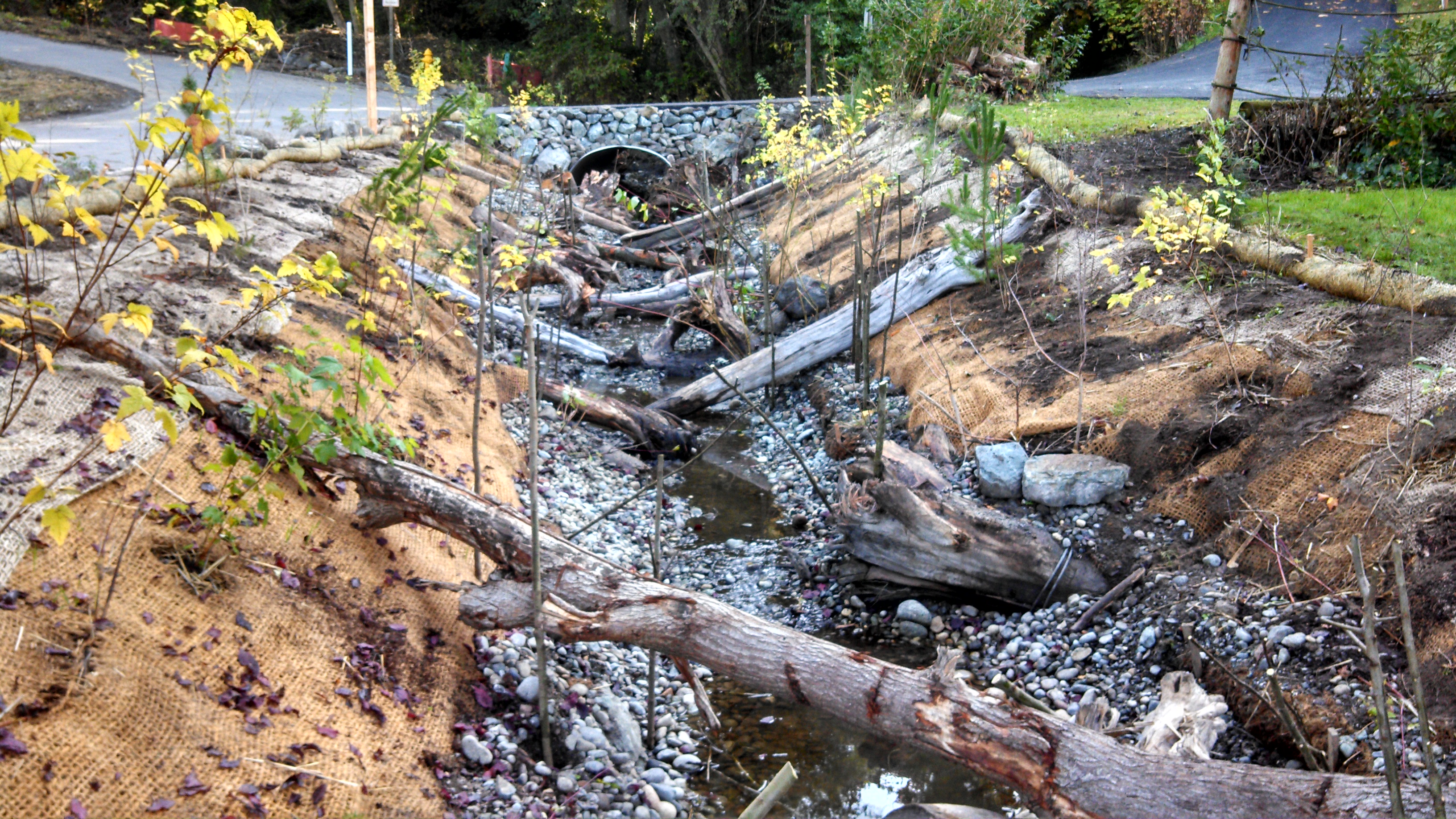 After the culvert was restored. Photo by Brett Shattuck

Natural Resources department seeks out important streams that are in need of restoration.

TULALIP, Wa. -In an effort to boost salmon populations and abide by treaty rights, the state of Washington has been court ordered to fix problem culverts, which prevent salmon from accessing integral streams. Tulalip’s Natural Resources department has been helping the State’s effort by repairing one culvert per year for the last few years. Greenwood creek in the Warm Beach community, the most recent culvert repaired by Natural Resources, was found to be an important stream for juvenile salmon and acts as a nursery prior to entering the ocean.

“We try to repair one a year or every other year. It’s something we do when we have time on the side,” said Brett Shattuck of Tulalip’s Natural Resources. Brett works as a forest and fish biologist, a position that doesn’t center on stream restoration. Together as a department though, they research and find vital streams that require repair yet fall out of state jurisdiction which would require the state to repair according to the court order. While the state owns and is responsible for 1,521 culvert barriers, they have been court ordered to only repair just fewer than 1,000 of those within the next 17 years, a feat which the state implies that they do not have enough funds for in order to complete on time.

Brett includes that, “because most streams on the reservation are either naturally non-salmon bearing, or are utilized for hatchery operations and do not have wild salmon access for that reason,” they look beyond the reservation boundaries to find nearby, integral streams in need of repair that would otherwise be ignored. “These streams are really important to fish and a lot of them have degraded,” explained Brett. There are streams that contain salmon on the reservation including Quilceda Creek, Sturgeon Creek and Coho Creek, but these streams already have, or are in the planning stages, of being repaired by Natural Resources.

Greenwood Creek is located in the Port Susan watershed, and as a tidal stream, it is similar to an estuary where salt water tides flow in and mix with the out flowing fresh water. During salmon monitoring of one small portion of Greenwood Creek, it has been recorded to support over 700 salmon in various species. Brett explains, “most of the fish come from the Stillaguamish River and they come in here to avoid predators, to have refuge and to find food.” The stream, mainly utilized for salmon rearing also provides an extra half mile of stream for Silver and Coho spawning.

Many streams located within development areas have degraded environmentally and structurally. Stream area diminishes due to roads, invasive plants change habitat and inaccessible culverts prevent salmon from traveling further upstream. When a stream is developed, a culvert is placed in the stream to modify it so that it can be crossed over. As per Washington Department of Transportation’s data, many streams statewide are important to salmon spawning and rearing but overtime have become inhospitable; 1,960 out the 3,200 culverts statewide have been identified as fish barriers.

The Natural Resources department has restored this and previous streams through grant funding. The $50,000 in grant funding was obtained from Pacific Coastal Salmon Recovery Fund (PCSRF) to replace the preexisting culvert with one that is more functional and to excavate in order to restore 250ft of the stream. While Snohomish County did not provide funds they did provide in-kind services and materials to the project which match the grant fund in cost from PCSRF. 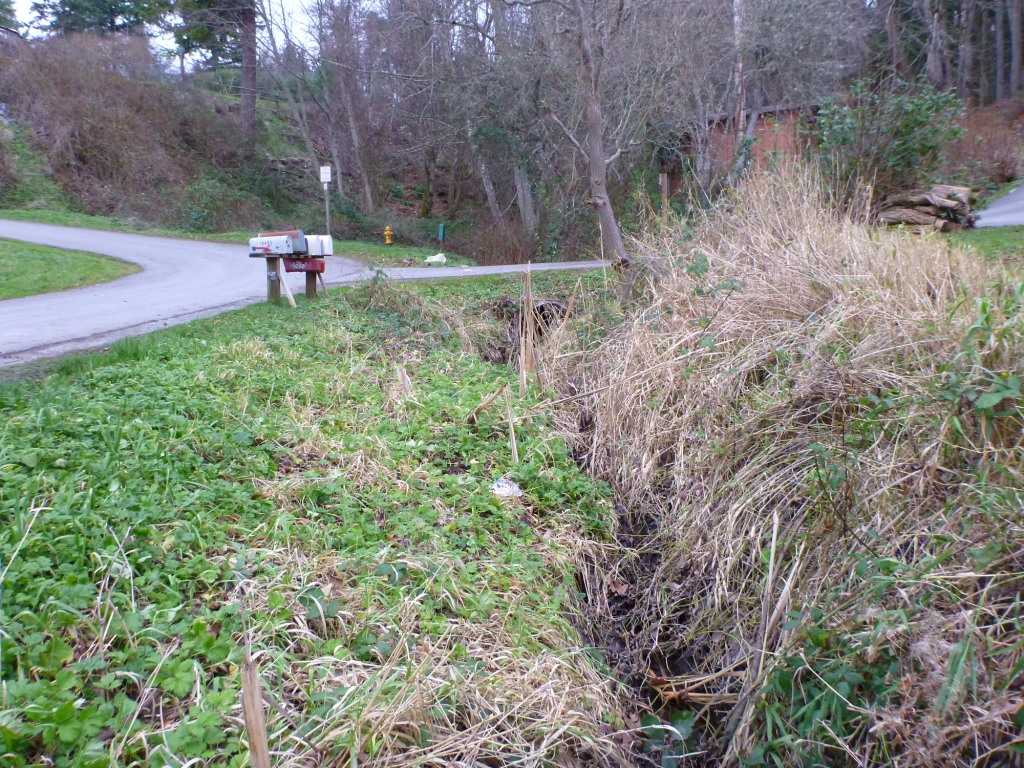 Before the culvert was restored. Photo by Brett Shattuck 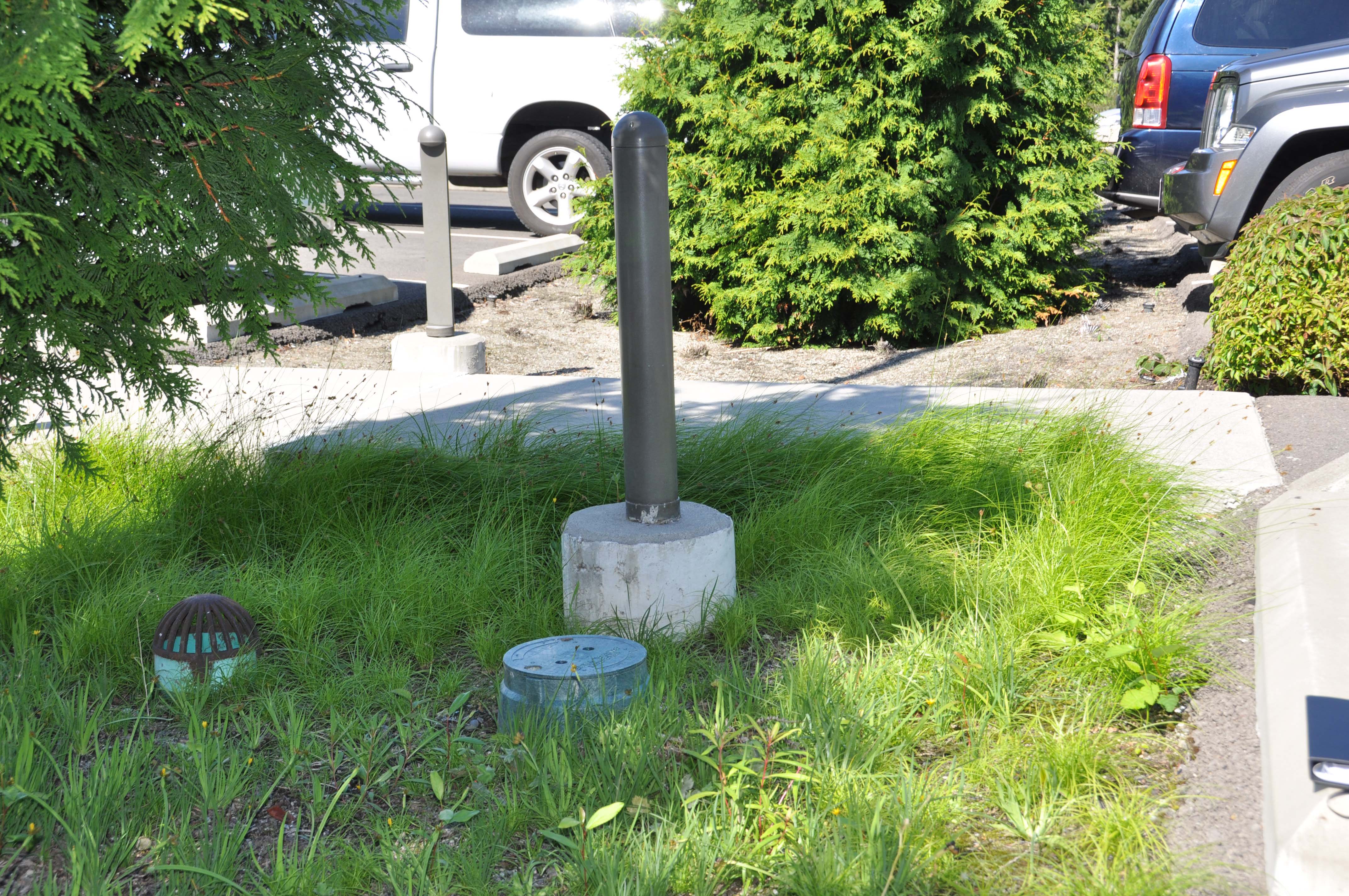 TULALIP, Wash. – The rain gardens at the Tulalip administration building have had a year to flourish, and flourish they have.  When you drive through the parking lot you see trees in the garden strips along with some shrubs, but towards the back you can see a spray of green areas that are roped off.  Some people are not aware that these roped off garden areas are not weeds, but are native vegetation and they were chosen specifically for their ability to remove pollutants.

“It’s a menagerie, but that’s how it was designed, to be low growing and provide a green landscape that would help filter out the pollutants,” said Derek Marks of Tulalip Natural Resources.

The gardens contain mainly different species of sedge, rush, woodrush and grass along with western buttercup, great camas and chocolate Lily. This last spring there weren’t many blooming camas or chocolate lily because the time between when they were planted and when they bloom in spring was too short for them to become established. 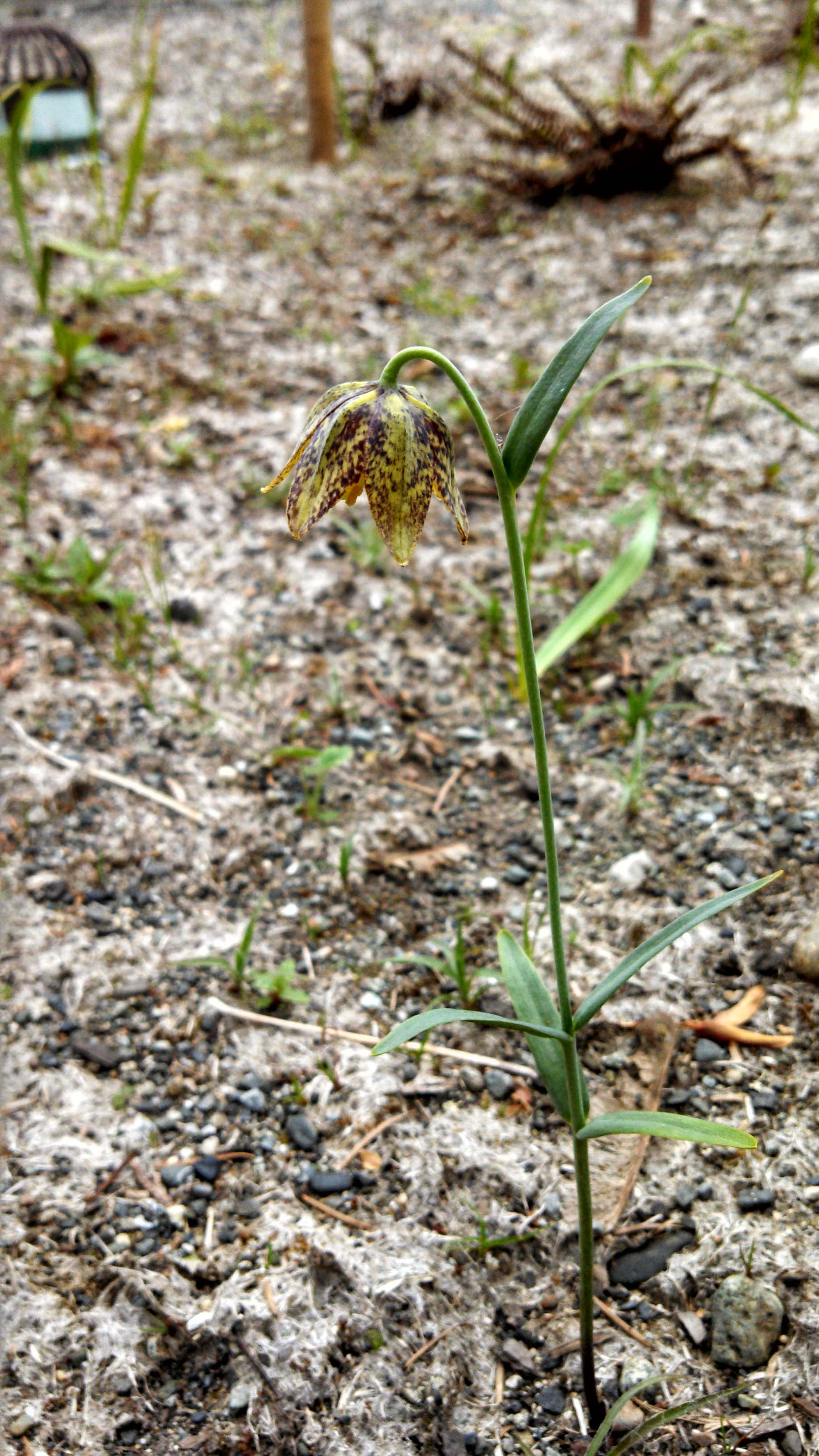 Derek explains that, “the rain gardens are filter strips.” And, “the plants and microbes work hand in hand to break down the pollutants.” They remove toxins, oils and heavy metals that are in water runoff from the parking lot. Without the rain garden the pollutants in the water runoff would make their way out and contaminate the Puget Sound. The possibility of turning other garden strips within the parking area into more rain gardens has come up, but nothing has been decided on as of yet.

This pilot rain garden project was developed by Tulalip’s Natural Resources’, Valerie Streeter and Derek Marks. They caution that although some of these plants are known for being harvestable, these particular plants, and any that may reside in other rain gardens, are not harvestable because they are full of toxins. 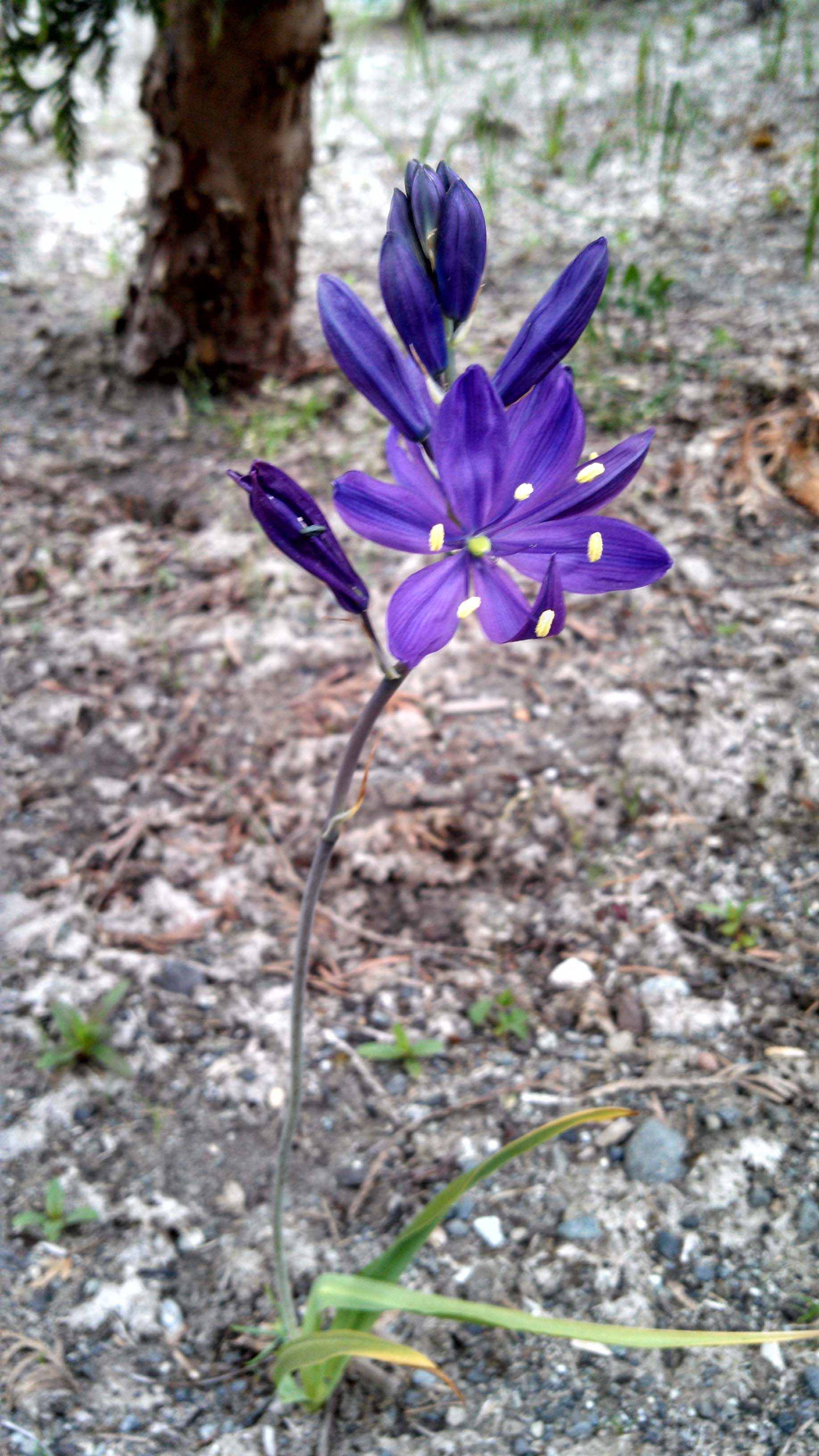 For those that would like to start their own rain garden, Washington State University and Stewardship Partners have begun a campaign to install 12,000 rain gardens in the Puget Sound area by the year 2016. The website for the campaign has videos to explain the whole process of putting in a rain garden and lists the many resources available to someone interested in installing one. Please visit 12000raingardens.org for more information about rain garden installation.