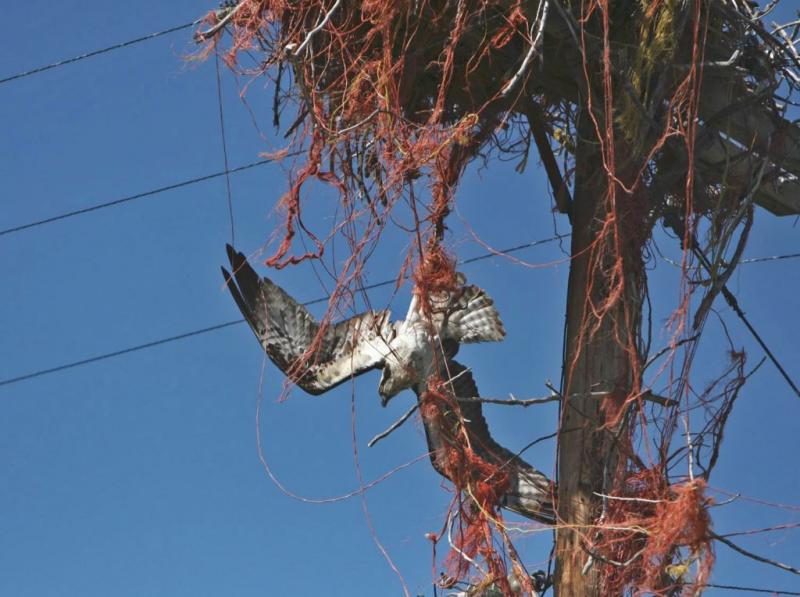 Osprey nests are a common sight near rivers, lakes and bays in the Northwest. If you look closely with binoculars, you might notice some of these large raptors like to line their nests with discarded baling twine or fishing line. The problem is it can kill them.

Now wildlife biologists are working with ranchers and at boat ramps to keep the attractive nuisance out of the ospreys’ clutches.

University of Montana professor Erick Greene has surveyed osprey nests in his home state and parts of Washington, Oregon, Idaho and Wyoming. In all those places, he discovered nests festooned with brightly colored plastic twine.

“Basically, wherever you’ve got agriculture, hay fields, livestock — which is a lot of the West — you have baling twine, which is used to tie up hay bales, and you have ospreys,” Greene explained.

Greene said for unknown reasons, the fish hawks are particularly fond of soft, frayed twine. They use it in place of lichens or grasses in their nests.

“Ospreys have a jones for this baling twine,” he said. “I wish they didn’t.”

“It looks as if anywhere between 10 to 30 percent of osprey chicks and adults in some areas that are particularly hard hit are killed by this baling twine,” Greene said.

The entangled raptors can suffer gruesome deaths by strangulation or starve because they can’t fly off to fish. That is, unless someone comes to the rescue — or better yet gives a nest what Greene calls a preventive “haircut.”

Last month, Greene enlisted a bucket truck and a crew of linemen from the Missoula Electric Cooperative to clean up a nest with chicks that sat on top of a power pole in the middle of a ranch by the Clark Fork River.

“This is a nest I’ve been worried about for years,” he said. “It has killed a lot of ospreys over the years. This is going to be a good one to clean up.”

Lineman George Porter and I went up to the nest with scissors. Strands of orange string draped from the wide bowl of sticks like Christmas tinsel.

It appeared as if the ospreys tied knots in the nest.

“That’s basically what it looks like, all tangled,” Porter said. “Yeah, they definitely use it to hold everything together.”

We found multiple kinds of twine in the nest, including a piece of black nylon rope. In the background, you could hear the osprey parents squawking. But they circled at a distance and did not interfere with the quick cleanup of their nest.

Out Of Sight, Out Of Nest

The preferable solution of course would be to keep twine and fishing line out of nests in the first place. In Idaho, the state Department of Fish and Game along with local partners are placing periscope-shaped recycling bins for fishing line at boat ramps.

Idaho Fish and Game wildlife biologist Beth Waterbury also worked on setting up a baling twine pick up and recycling program in her area, the upper Salmon River valley.

“It’s a logical solution and I think it is going to make a difference for the incidence of entanglement,” she said.

In western Montana, student researcher Amanda Schrantz did public outreach to farm groups and individual ranchers. She said many of her contacts didn’t have any idea about the lethal effects of discarded twine or the pressing need to collect and store it out of sight.

“Ospreys will go great distances to pick up this baling twine,” Schrantz explained. “Even though we don’t know why, they are. You kind of have to have 100 percent cooperation with this.”

Schrantz said if just one ranch or dairy leaves twine in its fields, the ospreys will find it. In Oregon’s Willamette Valley, a private plastics recycler accepts used baling twine and hay wrap.

“We recycle about a quarter million pounds per month of baling twine,” co-owner of Agri-Plas, Allen Jongsma said. He added used twine can be melted down to make new baler twine or automotive parts.