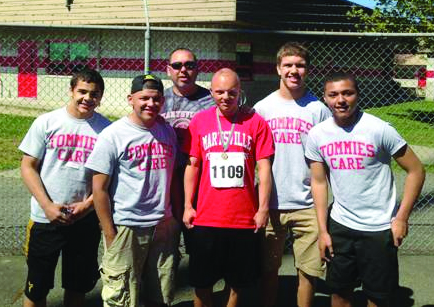 May 5th, 2013 was a rewarding day for many.  Tulalip Tribal member, Tyler Fryberg swept all four of his events, qualifying him for the Special Olympics State Tournament. Marysville Pilchuck produced just about 100 student athletes to volunteer with this years’ Special Olympics, Regions/State Qualifier.

The boys volunteered to help every athlete, but had a special interest in fellow Tulalip athletes, Tyler Fryberg and Bruce Williams (not pictured). They were really happy to be there to help, but the amount of intensity that comes along with these athletes is amazing.  They take their events serious and train very hard to compete and hopefully make it to the State Tourney, held at Fort Lewis. Tyler is not only a hero for people of Tulalip, but his fellow athletes, their parents and coaches make if clear that they enjoy watching him compete.

Tyler competed in four events Sunday, the Shot Put, 400-meter run, 100-meter, and the 400-meter relay.  He swept all four events, bringing home four gold medals.  Although, Tyler had his own cheering section of Tulalips, crowds would gather when it was his heat to race.  Tyler pretty much dominated all of his events with the exception of the 400-meter sprint.  This was very intense, as he was in second place for most of the race, but coming into the home stretch, Tyler turned on the afterburners and closed the gap on the leader, and with about 20 feet to the finish line, he passed the leader and won the race.  This was a great finish to a great race and the crowd went crazy.

Bruce Williams also qualified for State, winning a gold medal in the 200-meter sprint, where he blew away his competition, by 40 feet or so.  (Sorry Bruce, my phone went dead before I could get pictures of you, but we are very proud of you as well!)

We as fellow Tulalips are very proud of these guys and of course their fellow athletes for their heart and dedication.  You are definitely an inspiration to the Tomahawk Athletes who were there, showing that with drive and determination, we can all be great. When 1 Tulalip succeeds, all Tulalips succeed.

Tyler Fryberg on top of the podium

Thanks you guys, for the great day, and good luck at State. 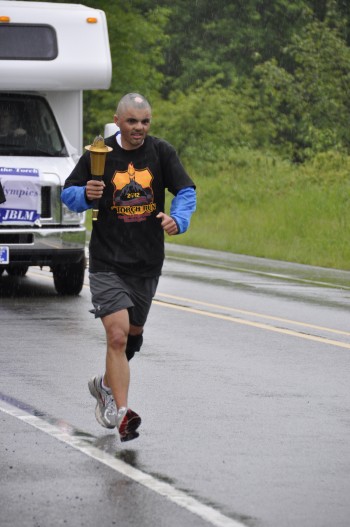 Tulalip Tribal member Tyler Fryberg has set his mind to return to the Special Olympics Summer Games this year. Tyler has been participating in sports activities like track and field, cross country, basketball and bowling, since high school. Prior to the summer games last year, Tyler was asked to carry the Special Olympics Torch, which he gladly accepted and ran 18 miles.

“I definitely want to carry the torch this summer,” said Tyler “it’s so much fun.”

For the past few weeks Tyler and the Marysville team have been training and preparing for the Northwest Regional Spring Sports Festival on May 5th, 2013 at Marysville Pilchuck High School. Tyler will make every effort during the festival to qualify for the Special Olympics Summer Games that will be held at Joint Base Lewis – McChord on May 31-June 2.

This year at the festival, Tyler will be taking part in the 100 meter and the 4 X 100 meter relay along with two extra events; the shot put and the 400 meter.

“I’m okay at shot put” says Tyler, “The ball is eight pounds and my best throw is ten meters.” Tyler has been practicing the shot put since the beginning of winter.

Tyler maintains a busy schedule of sports, training, school and volunteering. His favorite sport is running, but Tyler participates in other activities such as bowling and basketball.

“I actually won the bowling tournament, that was kind of cool.” boasts Tyler. 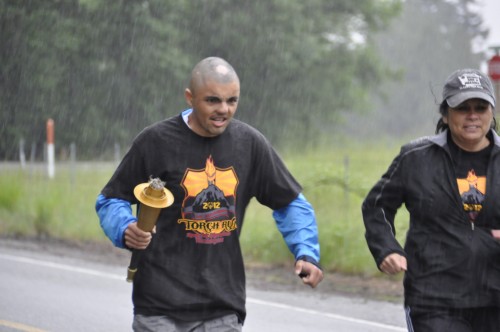 Along with sports, Tyler has an active interest in criminal justice. Last year he began taking criminal justice classes at Everett Community College. He contacted the Tulalip Police Department (TPD) and met with the Police Chief at the time, Jay Goss, and began volunteering in the office.

“It’s an interesting story,” laughs Tyler, “I came in and asked for a ride-along, I had a meeting with Chief Goss and I told him all about myself, and that because I have a disability I couldn’t get a real job, but he said I could volunteer instead.” At the TPD, Tyler gains extra experience in the criminal justice field by helping out around the office.

“Ty is very helpful,” says Shawn Edge of the Tulalip Police Department, “he’s always here at the busiest time of the day and he’s always here to help with the stuff that we can’t get to. “