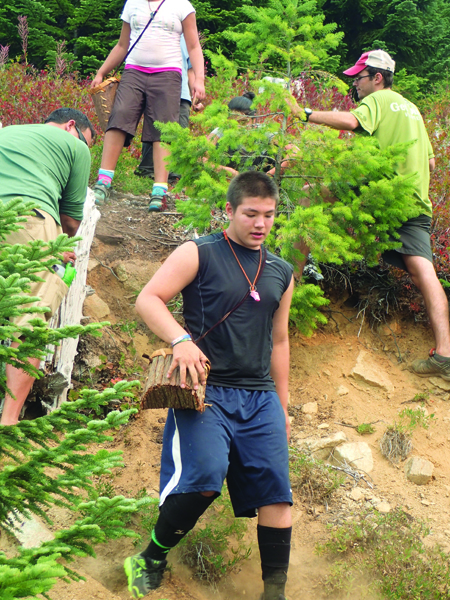 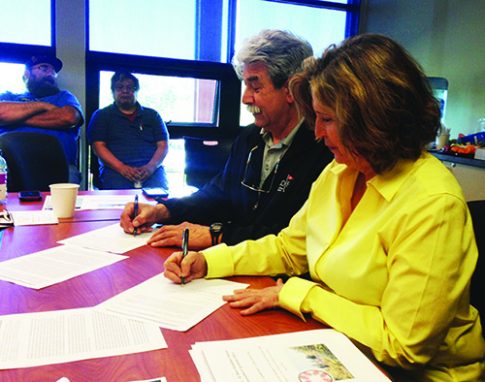 During 2016’s MOA meeting Chairman Sheldon and Forest Supervisor Jamie Kingsbury signed an historic and important agreement, the “swədaʔx̌ali Co-Stewardship Plan, 2016-2026”. The agreement, a provision to the MOA, is a culture resource management plan that covers the swədaʔx̌ali  area over the next ten years. swədaʔx̌ali  or “Place of Mountain Huckleberries” is a 1,280-acre parcel in Tulalip ancestral lands in the upper Skokomish watershed that the Tulalip-Forest Service Co-Stewardship looks to enhance. One of the many reasons this is important to the tribe is the huckleberry.

Northwest huckleberries are generally picked in the late summer/early fall seasons, and grow in the damp areas of mountains. The huckleberry, known for boosting the immune system, has always had a strong relationship to the indigenous peoples of the northwest. Coastal Native American ancestors considered the huckleberry to be of the utmost importance because of the medicine the plant contains.

Inez Bill, Tulalip Tribes Rediscovery Program Coordinator, provided a foreword for the swədaʔx̌ali Co-Stewardship Plan. In the foreword Inez spoke of the significance huckleberries and the spiritual connection Natives have with the berry.

Inez writes, “Huckleberry is a food and medicine to our people. Our ancestors visited certain areas for gathering these berries. They knew where the berries were growing, and what companion plants were growing there too and how to utilize them.” Like fishing and hunting the huckleberry is essential to the Native American culture. Preserving these plants requires a lot of love and care. Inez stated that caring for the swədaʔx̌ali area offers a chance to pass on the knowledge of the huckleberry and it’s harvest to Tulalip’s future generations.

“Through the teachings of how we value, take care of and utilize our environment, we pass down our history and traditions, and what is important to the cultural lifeway’s of our people, said Inez. ‘This connection to the land enables us to know who we are as a people. It is a remembrance.” 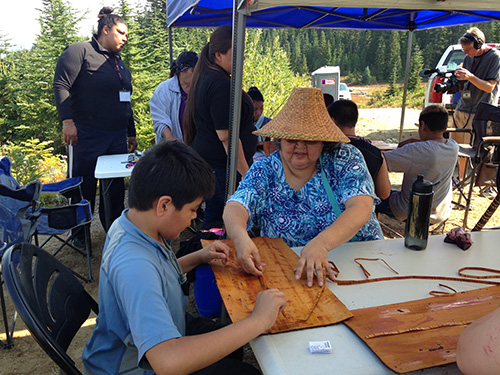 Tulalip Tribes Natural Resources Environmental Policy Analyst, Libby Nelson, agrees that passing the knowledge to the youth is essential to preserving Tulalip’s natural resources. The co-stewardship between the Tribe and the Forest Service is a way to ensure that Tulalip cultural traditions live on.

Libby states, “Treaty rights encompass more than an opportunity to pick berries, hunt game or harvest fish. Having a meaningful role on the ground, in the stewardship of these resources, helps reconnect tribal peoples to these lands and the teachings of their ancestors”.

Last year the Tulalip Tribes hosted it’s first Tulalip Mountain Camp at swədaʔx̌ali  for the youth of the Tulalip community, and looks to make it an annual trip. Inez detailed the trip stating that the youth were able to experience a connection to the mountains and ancestral lands, which in turn allowed the youth to bond with their families and community members by sharing what they learned and observed during their experience.

Tulalip’s Natural Resource Department and the Tulalip Youth workers will manage the swədaʔx̌ali area incorporating both traditional practices passed down from the ancestors and western science while nurturing the plants.

Libby stated that the forestry department is set to begin work on the swədaʔx̌ali area this summer. “As part of this plan, Forestry will be working on one of the major huckleberry areas this summer because it is threatened with getting shaded-out by conifers, which are small now and easier to move as opposed to two to three years from now when they start to vault out and will be more difficult to get out.”

The Natural Resource Department is looking to engage both summer youth workers and Tulalip Mountain Camp attendees to help remove the small conifers that are now about two-feet tall and have has many as 22,000 per acre.

According to a Seattle Times article from 1946, families camped, sometimes for the whole picking season, while gathering huckleberries. Gathering huckleberries was considered a fun social event where families from different tribes would travel to take part in the festivities including games, dances, and singing. Ceremonies were also held thanking the creator for the vitamin packed berry and asking for a blessed harvest. 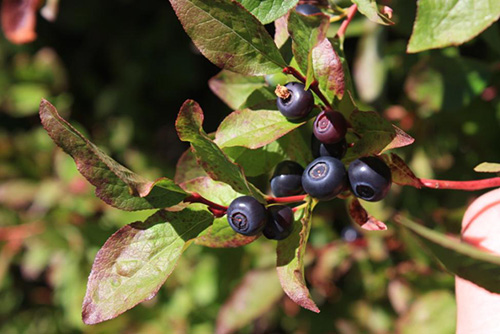 Often referred to as a superfood, huckleberry offers an abundance of benefits to its consumer. For example, these berries contain large amounts of antioxidants, which help aid in the prevention of many diseases such as cancer, diabetes and heart diseases. In today’s society diabetes is a prevalent disease in communities all across Native America. The huckleberry is a reliable food that diabetics can enjoy without elevated blood sugar levels. Huckleberries are used in a variety of recipes including tea, pie, and jam. When used for medicinal purposes the huckleberry can be applied to treat pain, heart conditions, and infections.

The swədaʔx̌ali Co-Stewardship Plan is an imperative provision to the MOA between the Tulalip Tribes and U.S. Forest Service, as evidenced by Inez in her conclusion. “Today, it is not only important that we continue the struggle to uphold our treaty rights, but we need to be involved in taking care of those resources our culture depends on so that they will be available for our future generations. This work at swədaʔx̌ali is an expression of Tulalip’s sovereignty regarding our foods, and our commitment to support the dietary needs and the life ways of our people.”

The projects will use woody material removed from forests during projects such as wildfire prevention and beetle-killed trees, and process woody biomass in bioenergy facilities to produce green energy for heating and electricity. The awardees will use funds from the Woody Biomass Utilization Grant program to further the planning of such facilities by funding the engineering services necessary for final design, permitting and cost analysis.

In fiscal year 2012, 20 biomass grant awards from the Woody Biomass Utilization Grant program totaling approximately $3 million were made to small business and community groups across the country. This $3 million investment leveraged more than $400 million of rural development grants and loan guarantees for woody biomass facilities. The program has contributed to the treatment of more than 500,000 acres and removed and used nearly 5 million green tons of biomass at an average cost of just $66 per acre. Grantees also reported a combined 1,470 jobs created or retained as a result of the grant awards.

The program helps applicants complete the necessary design work needed to secure public or private investment for construction, and has been in effect since 2005. During this time period, more than 150 grants have been awarded to small businesses, non-profits, tribes and local state agencies to improve forest health, while creating jobs, green energy and healthy communities.

Out of the 17 applications received, the Forest Service selected 10 small businesses and community groups as grant recipients for these awards. According to the requirements, all 10 recipients provided at least 20 percent of the total project cost. Non-federal matching funds total nearly $6.3 million.

The following are the 2013 woody biomass utilization grantees:

The mission of the U.S. Forest Service is to sustain the health, diversity and productivity of the nation’s forests and grasslands to meet the needs of present and future generations. The agency manages 193 million acres of public land, provides assistance to state and private landowners, and maintains the largest forestry research organization in the world. Public lands the Forest Service manages contribute more than copy3 billion to the economy each year through visitor spending alone. Those same lands provide 20 percent of the nation’s clean water supply, a value estimated at $7.2 billion per year. The agency has either a direct or indirect role in stewardship of about 80 percent of the 850 million forested acres within the U.S., of which 100 million acres are urban forests where most Americans live.