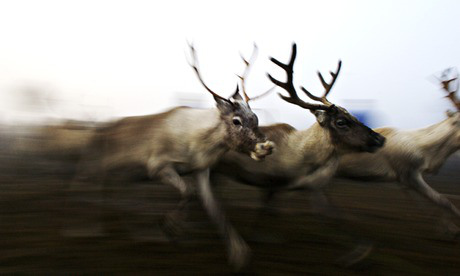 Power lines are seen as glowing and flashing bands across the sky by many animals, research has revealed.

The work suggests that the pylons and wires that stretch across many landscapes are having a worldwide impact on wildlife.

Scientists knew many creatures avoid power lines but the reason why was mysterious as they are not impassable physical barriers. Now, a new understanding of just how many species can see the ultraviolet light – which is invisible to humans – has revealed the major visual impact of the power lines.

“It was a big surprise but we now think the majority of animals can see UV light,” said Professor Glen Jeffery, a vision expert at University College London. “There is no reason why this phenomenon is not occuring around the world.”

Dr Nicolas Tyler, an ecologist at UIT The Arctic University of Norway and another member of the research team, said: “The flashes occur at random in time and space, so the power lines are not grey and passive, but seen as lines of light flashing.”

He said the discovery has global significance: “The loss and fragmentation of habitat by infrastructure is the principle global threat to biodiversity – it is absolutely major. Roads have always got particular attention but this will push power lines right up the list of offenders.” The avoidance of power lines can interfere with migration routes, breeding grounds and grazing for both animals and birds.

Autopsies on dozens of mammals from zoos and abbatoirs showed their eyes were able to see UV, including cattle, cats, dogs, rats, bats, okapi, red pandas and hedgehogs. Also on the list were reindeer and further work published in the journal Conservation Biology showed these animals, whose eyes are specially adapted to the dark Arctic winters, are particularly sensitive to UV light. UV vision helps reindeer find plants in snow cover, but in the depths of winter their wide irises and sensitive eyes means the power lines appear particularly bright.

The avoidance of power lines had been explained in the past by the corridors cut through forests to accomodate them, where animals would be exposed in the open to predators.

But this explanation could not apply in the treeless tundra of northern Norway, where 220,000 reindeer are tended by 7,000 herders from the traditional Sami people. “Right now, there is a plan to build a 186-mile long power line in north Norway,” said Tyler. “This new work will encourage power companies to negotiate with herders about where they put the power lines.”

Around the world, Tyler said: “There are hundred of examples of animals avoiding power lines. Now we know that, not only do these clear-cut corridors mean exposure to predators, at the same time there is this damn thing flashing at you.”

Jeffery said burying all power cables would be unrealistically expensive but added that one idea would be to put a non-conducting shield around the cable to screen it from view. The UV light, which is caused by electricity ionising the air around cables, are a major source of inefficiency for electricity companies and also cause the hissing or crackling noises sometimes heard.

Power companies already use helicopter-mounted UV cameras to monitor power cables, because the flashes can be an early sign of conduction problems, but the cameras only record a very narrow range of UV. “Animals see across the range, so the intensity of light seen by them is much more than seen by the helicopter flights,” said Jeffery.