Tongass Conservation Society
The headwaters of the Unuk River, where a company called KSM wants to build a humongous open-pit mine for cold, copper and other metals.

The Unuk River watershed, straddling the border between British Columbia and Alaska, is on track to become ground zero in a struggle to stop the world’s largest open-pit mine, Kerr-Sulphurets-Mitchell (KSM). The fight against it is uniting First Nations and Alaska Natives as they battle to preserve stewardship of the pristine region. And it is just one of five massive projects proposed for the region.

If KSM secures the financing and the regulatory go-ahead, the giant mine would turn 6,500 acres of pristine land into an industrial zone that would generate more than 10 billion pounds of copper and 38 million ounces of gold, according to a project summary. As with any large mine, it would employ a hefty workforce—in this case mostly Canadians—and create taxes and royalty payments for Canada. But it would also produce a slew of waste. And that’s what critics say downstream Alaska communities stand to take on: none of the economic benefits but much of the environmental risk.

With its remote headwaters in British Columbia, the Unuk River is one of the world’s most prolific salmon waters. An international river, the Unuk flows into neighboring Southeast Alaska and its temperate rainforest, the 17-million-acre Tongass National Forest, a place of towering coastal mountains, tidewater glaciers and fog-shrouded islands. The Unuk empties into Misty Fjords National Monument, an attraction for cruise ship passengers viewing glaciers, bears and whales that dot Alaska’s Inside Passage. The Unuk, known as Joonáx̱ in Tlingit, supports large runs of king salmon, a cultural icon prized by commercial, sport and subsistence fishermen alike.

“The consequences for salmon runs on both sides of the border could be devastating, yet Alaskans would see none of the economic benefit,” wrote National Geographic Explorer-in-Residence Michael Fay in a 2011 letter to British Columbia Premier Christy Clark, signed by nearly 40 other scientists.

Seabridge Gold, the mine developer, expects KSM to generate more than two billion tons of acidic waste rock called tailings, a byproduct of the mining process than can be lethal to fish. The tailings would be held behind two huge dams—each taller than the Hoover dam—built in the headwaters of the Nass River, one of British Columbia’s most important salmon rivers.

Because KSM is located in sensitive fish habitat, it has raised the ire of Southeast Alaska tribes, fishermen and some Canadian First Nations. They joined forces in early April, forming a cross-border working group to develop a unified strategy to protect their interests.

It’s not just KSM that worries them. KSM is one of more than a dozen mines planned for northern B.C., including five located in salmon-bearing watersheds that arise in Canada and drain into Alaska. The British Columbia government is encouraging the mines’ development, offering tax breaks and relaxed environmental rules. Also spurring development is the construction of a new power line extending electricity into the northwest corner of the province, bordering Alaska. The transboundary projects include Red Chris, Schaft Creek, Galore Creek and Tulsequah Chief. The international rivers they could affect are the Taku, Stikine and Unuk, some of Southeast Alaska’s top salmon rivers.

“These projects could not be in a worse location. Salmon is our traditional food. If anything happens to them, we would be in a world of hurt,” said Ketchikan fisherman and tribal leader Rob Sanderson Jr.

Fishing, seafood processing and tourism are key economic drivers in Southeast Alaska. The seafood industry produced $641 million worth of fish in 2011, which created 17,500 jobs and $468 million in wages. A million visitors tour the area every year, spending about copy billion.

Tribes have passed numerous resolutions of concern about how KSM and the other transboundary mines could potentially contaminate the region, including their traditional fishing grounds. Recently a delegation of tribal leaders and fishermen flew to Washington, D.C.  to lobby for State Department intervention. They delivered a letter signed by 40 businesses, groups and individuals asking for help.

Alaska’s congressional delegation got the message. Shortly after the Alaskans flew home, Senators Lisa Murkowski and Mark Begich, along with Congressman Don Young, contacted the office of Secretary of State John Kerry by letter asking him to get involved to protect Alaska’s interests. Because the mines are located in Canada, Alaska tribes feel they have less influence over the outcome than if they were on U.S. soil.

“It’s happening in a foreign country. We don’t have a lot of control over it,” said Sanderson. “They don’t even have to consult with Alaska tribes.”

The U.S. Environmental Protect Agency has raised issues regarding the KSM project, mirroring the tribes’ concerns. The U.S Interior Department has urged Seabridge Gold to consult with Alaska tribes regarding fishing and clean water.

Recently Seabridge sent its vice president for environmental affairs to Alaska to participate in a tribal meeting on Prince of Wales Island near Ketchikan regarding KSM. Seabridge’s Brent Murphy told the Juneau Empire that “the overwhelming design philosophy for the KSM project is the protection of downstream environments and that is ensuring protection also for Alaskans.”

On its website, Seabridge notes that KSM has undergone extensive review by environmental and technical experts over the past five years to see that salmon and other wild resources are protected.

But Seabridge’s assurances have done little to allay skepticism on the U.S. side. Since the meeting on Prince of Wales in late March, the newly elected president of Alaska’s largest tribe, the Juneau-based Central Council of the Tlingit and Haida Indian Tribes of Alaska, has elevated the matter.

“This is a direct threat to the lifestyle and culture of our tribes’ 29,000-plus members,” said Richard Peterson, tribal president.

At Peterson’s urging, the Central Council adopted a resolution giving Southeast Alaska’s 19 federally recognized tribes the green light to work with First Nations to try to slow the development of the transboundary mines.

“We need a collective call to arms,” said Peterson.

Not all B.C. First Nations oppose the KSM mine or the other transboundary projects. The Gitxsan and Nisga’a Nations support the mine’s development. But others, including the Gitanyow Hereditary Chiefs, who live downstream from where the KSM waste facility would be located, are opposed.

“Nass River fish are critical for the food security of the Gitanyow,” said Kevin Koch, a fish and wildlife biologist with Gitanyow Fisheries Authority. “KSM poses a major threat to the Gitanyow way of life.”

Koch noted that the Gitanyow have constitutionally protected aboriginal rights to fish in the Nass. Seabridge maintains that any ill effects from mine waste on Nass River salmon would be minimal.

“I think John Kerry should be sitting in my office talking to me right now,” he said. “We need face-to-face consultation on this. We’re a sovereign nation.”

JUNEAU, Alaska — A British Columbian gold mine would pollute a major tributary of a Ketchikan fjord, threatening fishing stock and tourism, locals say.

They allege the mine’s s massive amounts of water requiring treatment, sludge, tailings, rock and processing would be a “looming train wreck.”

A meeting of fishermen, environmentalists and tribal members convened by environmental groups focused on the Kerr-Sulphurets-Mitchell, also known as KSM, The Juneau Empire reported.

KSM is a proposed mine undergoing permitting in British Columbia. It would be one of the largest mines in the world once operational.

“Alaska has nothing to gain by this mine,” said Southeast Alaska Conservation Council Mining and Clean Water Project Coordinator Guy Archibald. “We’re only going to get contamination from it.”

The mine is proposed for a site on the Unuk River, which flows into the Misty Fjords National Monument.

The river supports five species of salmon. Mine owner Seabridge Gold conducted an environmental report that predicts minimal impact on fish and their habitat.

Most criticized at the meeting was the lack of objective data on the mine’s impact. Since all data so far has been generated by company-funded studies, Archibald called for state dollars to pay for scientifically accurate and defensible” studies.

“The first thing we need is some baseline water quality data on these rivers,” he said, referring to other mines as well. “Right now we’re relying on what the companies are telling us.”

The Juneau Empire attempted to reach Seabridge Gold, but the company did not return calls requesting comment by the paper’s deadline.

After mining, the site could need monitoring for decades, and speakers questioned the resilience of several of the structures the company plans to hold tailings and other byproducts.

“This is a long-term, very large issue of transboundary impacts,” said seiner and speaker Bruce Wallace, past president on the executive committee of the United Fishermen of Alaska.

KSM expects to employ 1,040 people at the site once the mine is operational.

At least one British Columbia tribe supports the project. The Gitxsan Treaty Society said in a letter that mine representatives’ “open, honest and transparent” interactions with the Gitxsan Nation led them to support the project and the jobs and economic benefits they expect the mine to provide. 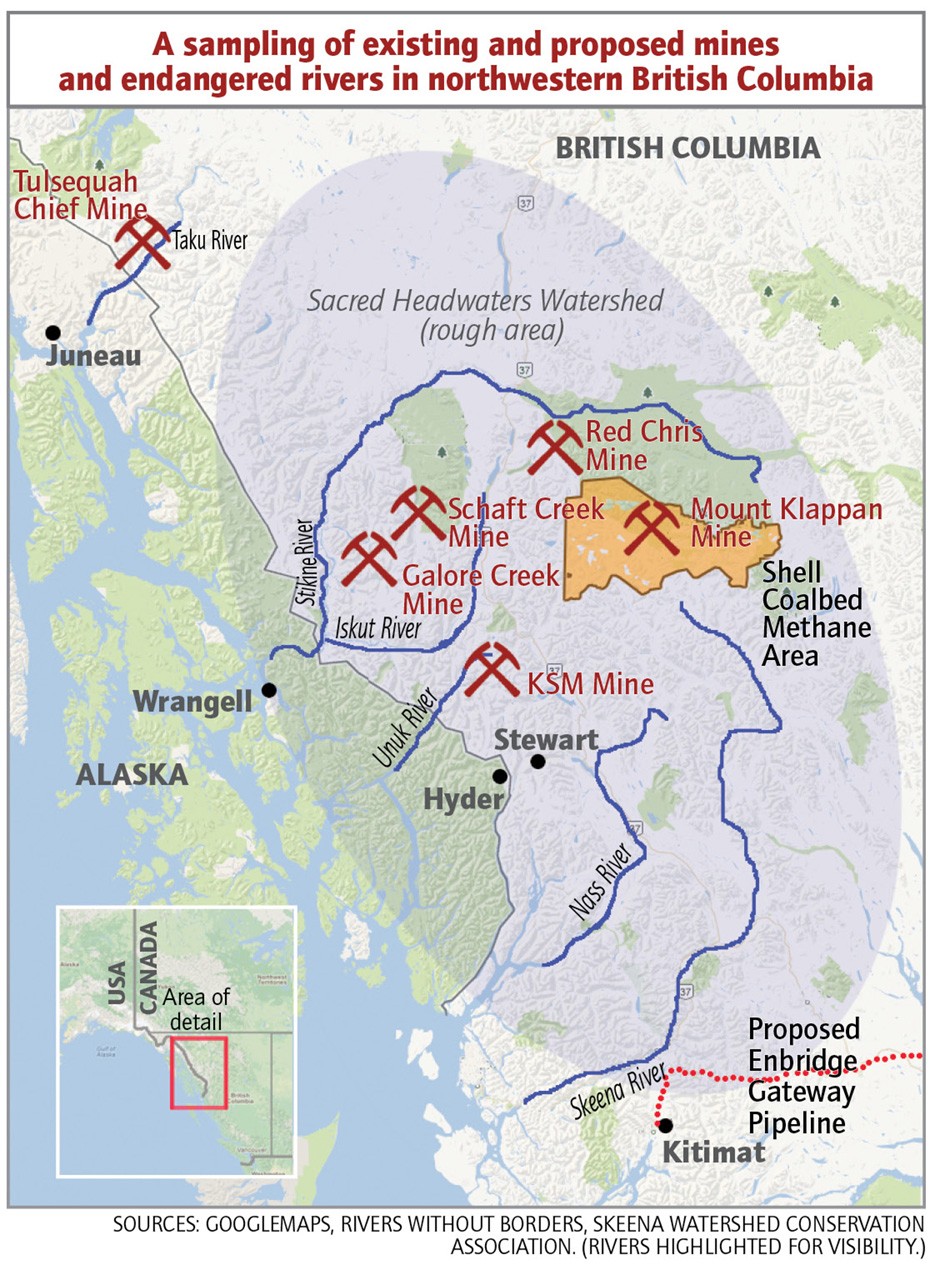