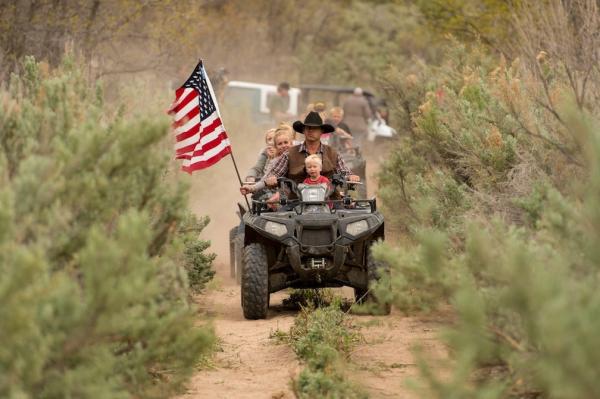 AP Photo/The Salt Lake Tribune, Trent Nelson
Ryan Bundy, son of the Nevada rancher Cliven Bundy, rides an ATV into Recapture Canyon north of Blanding, Utah on Saturday, May 10, 2014, in a protest against what demonstrators call the federal government’s overreaching control of public lands. The area has been closed to motorized use since 2007 when an illegal trail was found that cuts through Ancestral Puebloan ruins. The canyon is open to hikers and horseback riders.

ATVs have not been allowed through Recapture Canyon since 2007, but that didn’t stop a group of protesters on Saturday, May 10 from riding the trail—which is full of Native American sacred sites—anyway.

The Bureau of Land Management closed Recapture Canyon in Blanding, Utah to ATVs in 2007 after enthusiasts were caught trying to construct another trail illegally, and in so doing damaged archaeological sites, reports The Salt Lake Tribune.

Saturday’s ride was a demonstration by residents and San Juan County Commissioner Phil Lyman that they want control of the lands in public hands, a fight that has been going on for eight years. Only eight percent of San Juan County is not managed by the BLM, reports the Los Angeles Times.

Lyman and others who want the canyon reopened to ATVs argue that their families have been using the land for recreation for years.

“My grandfather called that canyon the most beautiful thing he’d ever seen in his life. It’s important to our family. To see it as the focal point of a conflict is painful,” Lyman said before riding into the canyon on an ATV, to the Los Angeles Times.

People listen to San Juan County Commissioner Phil Lyman at Centennial Park in Blanding, Utah on Saturday, May 10, 2014. Lyman organized an ATV protest ride into nearby Recapture Canyon to show that the federal agency isn’t the “supreme authority” and local residents have a right to have their opinions heard. The area has been closed to motorized use since 2007 when an illegal trail was found that cuts through Ancestral Puebloan archaeological sites. The canyon is open to hikers and horseback riders. (AP Photo/The Salt Lake Tribune, Trent Nelson)

But there are others who have been in the area for far longer than Lyman and his supporters.

“Since well before the state of Nevada, the federal government, and farmers and ranchers occupied the area, tribal nations—including the Las Vegas Band of Paiute, Moapa Band of Paiute, and other tribes in the area—have respected and honored the Utah Canyon as a sacred place,” the National Congress of American Indians said in a statement opposing the ride. “Native peoples believe the canyon contains many markers from their ancestors. An action like this is no more appropriate than a similar activity at a church or other place of worship.”

This April 9, 2011 photo shows an Anasazi ruin in the cliff close to “Lem’s Trail” in Recapture Canyon, near Blanding, Utah. A San Juan County commissioner tired of waiting for the Bureau of Land Management led an ATV ride into the canyon May 10, 2014. (AP Photo/The Salt Lake Tribune, Scott Sommerdorf)

A number of other groups have also spoken out against the ride.

“We believe the [Bureau of Land Management] should be providing more law enforcement to protect and preserve the cultural and natural resources for which it is the nation’s caretaker, and not providing more motorized access to areas containing cultural and natural resources that it has demonstrated that it is unable to protect,” Leigh J. Kuwanwisiwma, preservation director for the Hopi, wrote in a May 1 letter to the BLM.

“It is sad that irreplaceable treasures of importance to all Americans would be sacrificed on the altar of anti-government fervor,” Jerry Spangler, executive director of the Colorado Plateau Archaeological Alliance, said in a statement. “It is worse that protesters would be so blinded to their own insensitivity as to what others consider to be sacred treasures of their past.”

Willie Grayeyes, chair of a nonprofit that lobbies to protect Navajo land, was offended not only by the lack of sensitivity of the riders for Native culture, but also because a veterans retreat had to be relocated because of the protest.

“This opportunity for healing, to help these men and women has been postponed due to the threats of illegal activities by San Juan County Commissioner Phil Lyman on behalf of those who desire to drive their ATV toys over the sacred ruins of others,” wrote Grayeyes in a letter to The Salt Lake Tribune.

Many are comparing this recent protest to the exploits of private rancher Cliven Bundy in Nevada, whose cattle graze for free on U.S. government land.

RELATED: Cliven Bundy: Racist Remarks, and Reports of Ranching Since Only 1954

Canyon Country Rising Tide have joined with the Lakota, Dine, and Idle No More in condemning the tar sands in Utah as a defiling of the precious Green River ecosystem, and an assault on fresh air and clean water in the US. The tar sands and oil shale mining proposed in Utah and neighboring states would traverse more than one thousand square miles.

The first blockade went up two hours ago, and is still holding. Contracted Cardwell, Inc. contractors attempted to hit peaceful protestors with their trucks, but the activists were able to lock down, and unfurl a banner that reads, “If you build it they will come.”

Private security personnel and three police cars have shown up on the scene, but no arrests have been made yet.

The second blockade went up approximately one hour later, and is still holding.