OLYMPIA, Wash. — Ballots for the election in Washington must be postmarked by Election Day or placed in a drop box by 8 p.m.

With some ballots still in the mail on election night, results in a close race may not be known for days.

The secretary of state’s office said 29 percent of the ballots had been returned as of Monday afternoon. That’s about 1.1 million ballots of the 3.9 ballots that were mailed.

Counties will certify results by Nov. 24. And Secretary of State Kim Wyman and Gov. Jay Inslee will certify the election on Dec. 2. 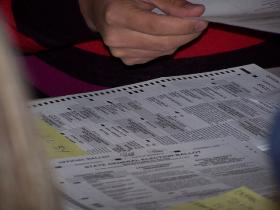 Initiative 594 to expand background checks for gun sales is far out in the lead when it comes to fundraising. So far, nearly $3.4 million raised with recent half-million-dollar contributions each from Paul Allen, Bill Gates and Melinda Gates. Plus, venture capitalist Nick Hanauer just ponied up $1 million.

Number two in the fundraising race is Initiative 1351 to reduce class sizes. It has raised $1.5 million mostly from the Washington Education Association.

In third place is Initiative 591. This is the dueling background check measure funded by pro-gun groups. So far they’ve raised just over $1 million.

By Washington ballot measure standards these are still modest numbers. Last year, the battle over GMO-labeling drew more than $40 million in spending. 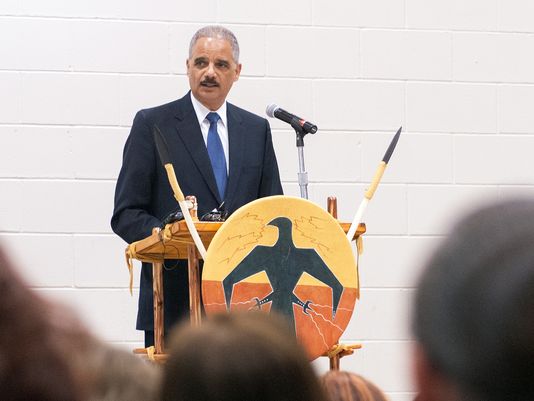 Holder said the goal is to require state and local election officials to place at least one polling site in a location chosen by tribal governments in parts of the nation that include tribal lands. Barriers to voting, he said, include English-only ballots and inaccessible polling places.

In Alaska, for example, the village of Kasigluk is separated into two parts by a river with no bridge. On election day, people on one side have just a few hours to vote before a ballot machine is taken by boat to the other side.

In Montana, a voting rights lawsuit is pending from tribal members on the Crow, Northern Cheyenne and Fort Belknap reservations. They want county officials to set up satellite voting offices to make up for the long distances they must travel to reach courthouses for early voting or late registration.

“These conditions are not only unacceptable, they’re outrageous,” Holder said. “As a nation, we cannot — and we will not — simply stand by as the voices of Native Americans are shut out of the democratic process.”

After consulting with tribal leaders, his office will seek to work with Congress on a potential legislative proposal, Holder said.

Associate Attorney General Tony West discussed the announcement later Monday in Anchorage, during a speech to the National Congress of American Indians.

Despite reforms to strengthen voting rights, there also have been setbacks, West told the crowd. He cited last year’s U.S. Supreme Court ruling in favor of Shelby County, Alabama.

The decision effectively stripped the federal government of its most potent tool to stop voting bias — a requirement in the landmark Voting Rights Act that all or parts of 15 states with a history of discrimination in voting, mainly in the South but also Alaska, get Washington’s approval before changing the way they hold elections. Now, changes do not have to be submitted, and it is up to the U.S. Justice Department or others who sue to prove changes are discriminatory.

The Justice Department also intervened earlier this year in response to a plan by Cibola County, New Mexico, to eliminate voting-rights coordinators.

Remote geography and the inability to speak English do not free Americans from the obligations and responsibilities of citizenship, West said. Neither should they “impede the rights to which we are all entitled,” he said.

“I think anything that involves tribes and tribal authority is extremely important,” said Dr. Ted Mala, director of traditional healing at the Alaska Native Medical Center and director of tribal relations for an Anchorage-based tribal health services organization.

He said tribes have had more opportunities for such consultations with the federal government under the Obama administration.

“We even meet with the president once a year, and it’s a wonderful thing,” Mala said.

Carol Schurz is a councilwoman for the Gila River Indian Community in Sacaton, Arizona. She said the community organizes its own elections and consults with state officials on state and federal elections.

Schurz encourages voter registration and said the Justice Department proposal would be well-received. She said it could empower indigenous voters “if we have the opportunity to get all our people engaged.”

Officials in Arizona are planning to set up separate voting systems for state and federal elections after losing to tribal interests in Arizona v. Inter Tribal Council of Arizona, a voting rights case that was decided by the U.S. Supreme Court in June.

By a 7-2 vote, the court held that certain provisions of Proposition 200, a state referendum, are pre-empted by federal law. That means the state can’t ask people to prove their U.S. citizenship when they register to vote.

Arizona officials, however, say the ruling only applied to federal elections. So anyone who wants to register to vote for state elections must prove they are U.S. citizens.

The change could affect the voting rights of tribal citizens who were born in the U.S. but lack proper documentation. That was one of the key issues raised by the Inter-Tribal Council of Arizona in the Supreme Court case.

Get the Story:
Arizona law may restrict voting in local elections (The Washington Post 10/9)
Arizona to have two-track voting system (The Arizona Republic 10/8)