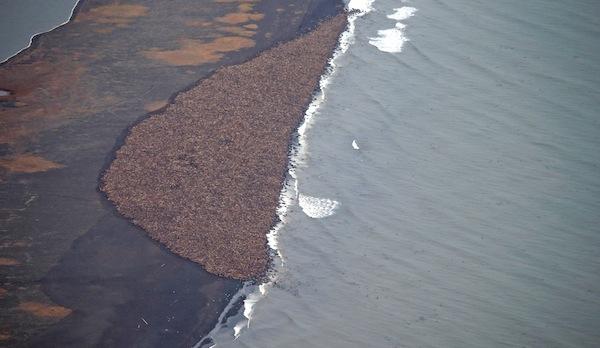 Corey Accardo, NOAA/NMFS/AFSC/NMML
This is what 35,000 walruses look like when they do not have sea ice to rest on in the open water.

With 35,000 walruses camped out on the edge of town, the 250-population Native village of Point Lay, Alaska has been thrust onto the world stage.

And, true to their custom, the residents have stepped up—not to bask in their potential 15 minutes of fame, but to embrace their traditional role as environmental stewards.

“These locals, these people, without a lot of funding or anything, have taken on this stewardship and protection of the haulout,” said Joel Garlich-Miller, a walrus specialist for the Marine Mammals Management department of the U.S. Fish and Wildlife Service, in a telephone interview with Indian Country Today Media Network. “They’re front-line conservationists.”

The walruses began arriving in mid-September, as they had been for the past few years. You can hear them from the village, residents said in a 2012 community workshop held with Garlich-Miller, community elders and an array of scientists. It is common for walruses to “haul out,” as it’s called, and take a break from feeding in the open sea, usually by pulling themselves onto ice floes. But with the summer ice extent dwindling drastically in the Arctic, a growing number have had to settle for land.

This has been happening off and on for years, but of late it has become much more pronounced. On September 30, scientists from the National Oceanic and Atmospheric Administration conducted their annual flyover to observe Alaska’s marine wildlife from the air. Catching sight of the mass of walruses clustered onto a sliver of northwestern Alaska coast, they snapped some spectacular photos and posted them on the web, noting that a lack of sea ice had forced walruses onto land.

With all the attention being paid to climate change over the past couple of weeks, between the People’s Climate March of September 21 and the United Nations Climate Summit two days later, the world’s attention was riveted. The sea ice had reached its lowest extent for the year a couple of weeks earlier, on September 17, the sixth-lowest minimum on record, according to the World Wildlife Fund (WWF).

“The massive concentration of walruses onshore—when they should be scattered broadly in ice-covered waters—is just one example of the impacts of climate change on the distribution of marine species in the Arctic,” said Margaret Williams, managing director of the WWF’s Arctic program, in a statement on September 18. “The sharp decline of Arctic sea ice over the last decade means major changes for wildlife and communities alike. Today’s news about the sea ice minimum is yet another reminder of the urgent need to ratchet down global greenhouse gas emissions—the main human factor driving massive climate change.”

The walrus, Garlich-Miller explained, is “typically considered an ice-dependent species.” They are not suited to an open-water lifestyle and must periodically haul out to rest.

“Traditionally during the summer months, broken sea ice has persisted through the Chukchi Sea during the entire summer, and walruses have typically remained offshore,” he said in a conference call with reporters on October 1.

But in recent years, Garlich-Muller said, the Chukchi Sea has become entirely ice-free by the end of summer. The number of walruses seen on shore has been growing. Nowadays, he said, tens of thousands of walruses haul out regularly in Russia as well. Numerous researchers have been monitoring this since its exacerbation, but the phenomenon of land haulouts is nothing new. What is new is the extent of their use of land, researchers said.

“Walrus have always hauled out on land, in small numbers in Alaska, and in much larger groups (tens of thousands) in Russia,” said anthropologist and Arctic researcher Henry Huntington to ICTMN in an e-mail. “The large haulout at Point Lay started in 2007, and has occurred most years since then, except when sea ice has persisted in the Chukchi Sea. So this is a relatively new phenomenon, and is almost certainly related to the loss of summer sea ice (meaning the ice is too far from shallow waters where walrus can feed, so they instead move to land in late summer/early fall when the ice is at is smallest extent).”

The concern now, Garlich-Muller said, is the walruses’ safety. A few problems arise when they’re on land that tend not to plague them on the ice. For one thing, there are more predators lurking. For another, the walruses are in much more crowded conditions, which can facilitate the spread of disease. Moreover, disturbing them causes the potential for stampedes, which could injure or kill the animals, especially the calves. Their vulnerability, Garlich-Muller said, is proportional to the size of the herd.

What disturbs them? Gunfire, aircraft, predators such as polar and grizzly bears, and human activity. Minimizing disturbance has become a major focus of the USFWS office in Alaska over the past few years, Garlich-Miller told reporters.

This is where Point Lay comes in.

“Some of the best and most successful conservation efforts that we’ve seen to date have occurred at the local level,” Garlich-Miller told reporters on October 1. “The community of Point Lay in particular has shown a great stewardship ethic at the haulout. They’ve sort of taken it under their wing. They’ve worked with the local flights in and out of their community to reroute aircraft landing and takeoff routes. The community, when walruses are present they work with their tribal members not to motor by the haulout with boats. They’ve changed their hunting patterns—although they are a subsistence-hunting community and legally entitled to hunt walruses, they’ve refrained from hunting at these large haulouts, where disturbance events can lead to lots of unnecessary mortality.”

Point Lay officials fended off reporters’ requests for visits and interviews. They were too busy protecting the herd.

“The Native VIllage of Point Lay IRA Council respectfully declines any interviews at this present time,” the village’s offices said in an e-mail to Indian Country Today Media Network. “We, as a tribe, did not wish for this event to be so widely publicized. Our community is a small, close knit, subsistence only community.”

Regardless, they remain the unsung heroes of the walrus haulout.