Over the years, the number of slot-style machines allowed has been set in prolonged and sometimes difficult negotiations, The News Tribunereported. But under the latest deal, the number — currently about 28,000 — would increase by 10 percent, and then automatically increase as market conditions dictate.

In theory, the number of machines could double over the next decade. But W. Ron Allen, with the Washington Indian Gaming Association, said that’s unlikely because the gambling market isn’t increasing that quickly.

The state Gambling Commission and four state lawmakers will vote next month on whether to send the deal to Gov. Jay Inslee for approval. At least one of those lawmakers, Republican Sen. Mike Hewitt of Walla Walla, said he opposes allowing the number of machines to increase in perpetuity unless the tribes agree to share some of their casino profits.

“In my opinion, this is probably the last shot we’ll ever get” to secure revenue sharing, Hewitt said.

Amy Hunter, who leads the commission’s communications and legal division, said that under the deal, state negotiators secured full compensation for the state’s costs for regulating the casinos. The existing fee arrangement falls short of that, she said.

The deal includes 27 of 29 tribes in the state — all but the Puyallup and Muckleshoot.

Under the terms, the gambling-machine limit would go up by 2,700, plus 1,350 more if the Cowlitz tribe in southwest Washington moves forward with a planned casino.

In any year that tribes come close to maxing out their new cap, the limit would rise again by another 1,350 statewide.

The long, steep climb of tribal gambling profits since casinos started opening in the 1990s leveled off last year, holding steady at $2.2 billion.

Tribal leaders say there isn’t enough demand for a major expansion of the gambling market. “I think it can only go so big anyway, and then the market is full,” said Mel Tonasket, vice chairman of the Confederated Tribes of the Colville Reservation.

Nontribal businesses can have card rooms but not slot-style machines. The state constitution allows gambling to be authorized only by supermajorities of lawmakers or voters.

That makes it hard for the nontribal businesses to see an expansion of tribal gambling proposed.

“It’s hard for us to sit back and watch an expansion of gambling which if we wanted, would take a 60 percent vote of the Legislature to get,” said Dolores Chiechi, executive director of the Recreational Gaming Association, which represents card rooms.

There’s not enough support in the Legislature for her group to resume its push for machines in card rooms this year, Chiechi said.

The 2013 Northwest Indian Gaming Conference and Expo will beheld July 15-17, 2013 at the Tulalip Resort Casino in Tulalip, Washington, about 30 miles north of Seattle, directly on I-5 at exit 200.

Our attendees come from the all of the Northwest states, with the largest number from Washington, followed by Oregon, California, Oklahoma, Idaho, and Montana. Save the date! 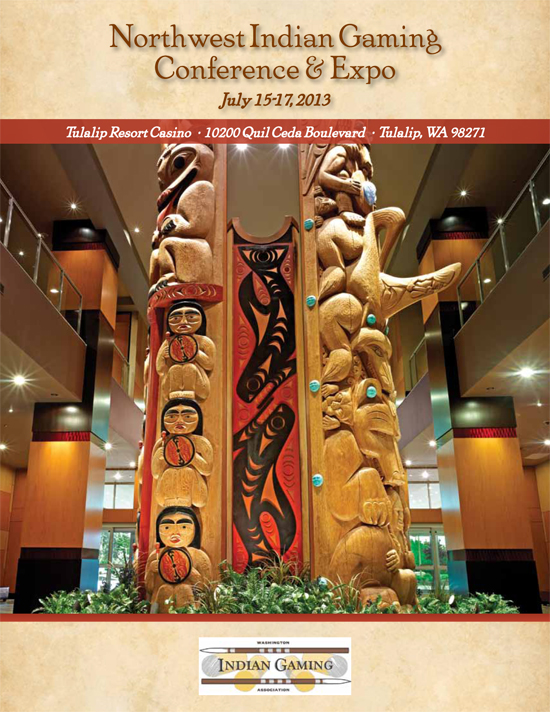