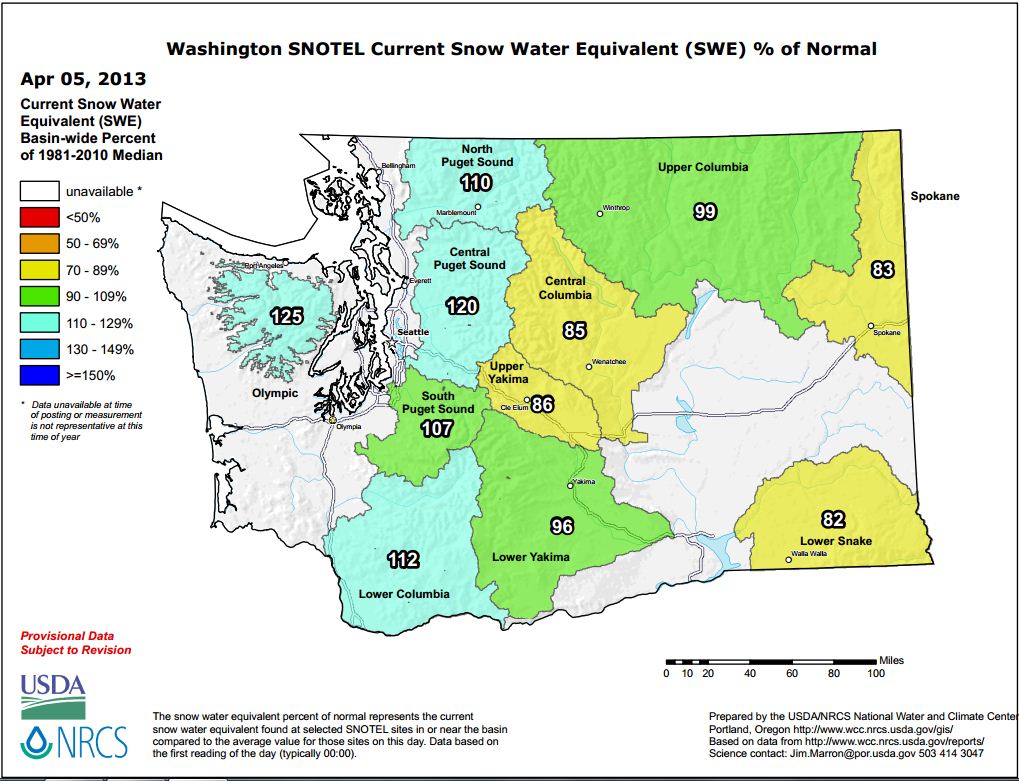 The mountain snowpack in Washington is 112 percent of normal and the best in the West, where the average for other states is about 75 percent, a water supply specialist with the Natural Resources Conservation Service said Friday.

Arizona is the lowest at 40 percent and the Southwest is in “tough shape” for its water outlook for the rest of the year, said Scott Pattee who works for the U.S. Department of Agriculture service in Mount Vernon.

The service compiled reports from measurements taken April 1 — usually the peak time for the mountain snowpack in the water year, which begins Oct. 1. The percent of normal figures are based on a 30-year average.

“The ‘so what’ on this story is that 70 to 80 percent of surface water in the Pacific Northwest comes from mountain snowmelt,” Pattee said.

The snowpack measurement tells utility managers how much power they can expect hydroelectric dams to generate, tells farmers how much irrigation water they can expect to pour on crops, tells fisheries managers whether migrating salmon will have sufficient stream flows. Snowpack information also is used in avalanche forecasts and by river-rafters planning their season.

In Washington, the snowpack is heaviest on the Olympics at 130 percent and lowest in the southeast corner of the state at 85 percent.

“I don’t think there’s going to be much concern,” Pattee said.

The Northwest received plenty of precipitation, especially in the October-December period.

“It just came in surges this year,” he said.

Other states don’t have as much water in the snow bank.

“Most of the Southwest is in pretty tough shape” with a poor stream flow outlook, Pattee said.

Snow measurements for the survey in Washington are taken by about 30 people with utilities, irrigation districts and agencies like the Bureau of Land Management. Data also comes from 70 automated SNOTEL stations in the state, Pattee said. The information goes through computer models for forecasts.

In Washington the snowpack peaked on March 24 and started slowly melting, he said.

The service only measures Northern California and the state has its own system for the rest of California, Pattee said.