YAKIMA, Wash. — The Yakama Nation Tribal Court ruled it has jurisdiction in an unprecedented lawsuit that maintains that the state has responsibility to manage an elk herd to prevent damage to a sacred burial site.

Chief Judge Ted Strong found in favor of the tribal member who brought the civil suit against the state Department of Fish and Wildlife when he ruled Friday that the Tribal Court has the authority to hear the case. He ordered the parties to discuss settlement options before continuing with hearings.

Attorneys for the state had asked the court to throw out the lawsuit, saying it lacked authority over Wildlife Department officials named in the suit because they are not tribal members and because the burial site is not on the reservation.

In the case of the burial sites, the judge found that the court’s jurisdiction should not be limited to the reservation.

The case was brought under a 1989 state law allowing tribal members to seek damages in civil court against those who have knowingly damaged Indian burial sites. The law allows cases to be brought in Superior or Tribal Court, but this is the first time a case has been heard in Tribal Court.

It’s a test case for the authority of the Tribal Court, said Jack Fiander, the attorney representing Shay-Ya-Boon-Il-Pilpsh, who brought the case. Fiander said he hopes this case can demonstrate the fair, professional process of the Tribal Court.

“The Yakama Tribal Member who seeks preservation of the ancient burial grounds has no less right to be heard by this court simply because the remains of his fellow Yakama lies buried in the grave some miles distant from the Yakama Reservation Boundary,” Judge Strong wrote in the order granting the jurisdiction.

The tribal court is “uniquely competent” to hear concerns about the desecration of burial sites, he wrote.

Plaintiff Shay-Ya-Boon-Il-Pilpsh, who is also known as Ricky Watlamet, is charged in Kittitas County Superior Court with felony unlawful hunting after allegedly shooting several of the elk on the Kittitas County property where the burial site is located.

He was invited by the nontribal landowner who was frustrated with the Wildlife Department’s response to her complaints about damage by the elk, which were also eating grasses intended for cattle.

But under state law, tribal members’ treaty hunting rights that allow them to hunt outside of the state-set seasons don’t apply on private land.

Fiander is also representing his client in the criminal case, but he said that he’s encouraged by the Tribal Court’s decision to hear this civil case.

“I think everybody’s pleased about the decision, but we see it as chapter three of about seven,” Fiander said.

“I’m cautiously optimistic that in less than a month as the snow melts that the elk will start leaving the property and hopefully, a settlement can be reached for next year.”

A spokeswoman for the state Attorney General’s Office, which represents the Wildlife Department, said in an email that it is “reviewing the decision with our clients and considering our course of action.”

The next hearing is set for June 19, after the parties meet to discuss settlement options.

Once the Tribal Court has reached a conclusion in the case, the decision can be subject to a federal court review to ensure the process was fair, Fiander said.

But, he said he would not be surprised if the state’s attorneys planned to appeal.

“My sense is that ultimately it will end up in federal court,” Fiander said.

The Washington Department of Fish and Wildlife (WDFW) approved the late-March dig after marine toxin test showed the clams are safe to eat.

Long Beach, Copalis and Mocrocks will be open to digging March 29-30.

No digging will be allowed at any beach after noon. The schedule, along with morning low tides, is:

By law, clam diggers are limited to 15 razor clams per day, and are required to keep the first 15 clams they dig. Each digger’s clams must be kept in a separate container.

All diggers age 15 or older must have an applicable 2012-13 fishing license to harvest razor clams on any beach. Licenses, ranging from a three-day razor clam license to an annual combination fishing license, are available on WDFW’s website at https://fishhunt.dfw.wa.gov and from license vendors around the state.

Meanwhile, WDFW has tentatively scheduled two morning digs in April, subject to favorable marine toxin tests. Final word on these digs will be posted on WDFW’s website at http://wdfw.wa.gov/fishing/shellfish/razorclams/current.html.

Dan Ayres, WDFW coastal shellfish manager, reminds diggers they will need to purchase a 2013-14 license to participate in the April openings, since current fishing licenses expire at midnight March 31. Licenses are available online (https://fishhunt.dfw.wa.gov/), by phone (1-866-320-9933) and from license dealers around the state.

Tentative opening dates in April, along with morning low tides, are:

From Do it yourself

Razor clams are coastal shellfish, known for their rarity and their meaty contents. Found in the sand of the intertidal coastal beaches, they can be harvested in several ways.

The best way to start is to get to the beach is early in the morning, so you can follow the tide out. First, look for a “clam show.” At the edge of the surf line, there will be small dimples or holes in the wet sand as the water ebbs. It’s where the clam has stuck its neck out and tried to dig to go back to the sea. As soon as you see the telltale hole, start quickly with one of these methods:

Tools you will need gloves (razor clams are so named because of the sharp edges of their shells), ice chest, clam gun or tube (for1st way), clam shovel or other sharp curved, narrow bladed shovel (for 2nd way) and table salt (for 3rd way). Although, the tools will majorly depend on how you are catching clams.

The tube, or “clam gun,” you need for razor clams is about 2-3 feet long and 4 inches in diameter, with a ½ inch hole at the top. Stainless steel or metal will work best for digging in wet sand. The best idea is to just go to a fishing supply store and get a clam gun, but if you have something similar it could work just as well. A clam gun has a T-shaped top so you don’t have to try and cover it with your fingers while digging.

When you spot a clam show, place the tube around it, with the hole in the center and work the tube down into the sand at least 2 feet. Then cover the hole at the top and remove the tube. Empty the tube onto the beach and take the clam or clams out and put it in your ice chest. Clam guns can be difficult to use on rocky or pebble-filled beaches.

2. Dig With a Clam Shovel

Once you locate the holes in the sand, dig quickly with a clam shovel. Go straight down about 3-6 inches from the center of the clam show. Place the back of the shovel facing the hole and begin removing sand. Don’t curve it toward the center of the hole because you risk cutting the clam off at the neck or breaking the shell. Keep scooping straight down until you expose the clam. Then reach in and carefully grab it by the neck or shell and place it in your ice chest.

Razor clams are extremely sensitive to salinity. One way to reduce your effort and have the clams come to you is to use table salt. As soon as you see the show, when it is open widest, pour salt into the hole. The clam should emerge in order to escape the salt and then just catch it and place it in your ice chest.

Be sure to check fishing rules and seasons with the Department of Fish and Wildlife (1-866-880-5431). There’s a limit on how many clams you can harvest at one time. So be very careful when digging, especially with the clam shovel. The clams are fairly delicate and break easily. Clams with broken shells will die, but they will also count for your total, so don’t discount the broken ones. They can still be eaten, just harder to clean. 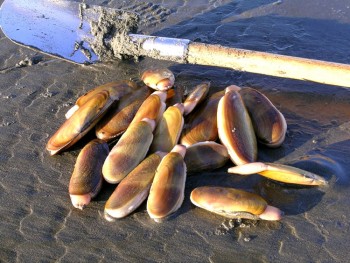 OLYMPIA – State fishery managers have approved an evening razor clam dig that will run March 7-11 at Twin Harbors and some of those days at three other ocean beaches.

The Washington Department of Fish and Wildlife (WDFW) approved the evening dig after marine toxin tests showed the clams on those beaches are safe to eat.

Dan Ayres, WDFW coastal shellfish manager, said the dig will extend for five consecutive evenings at Twin Harbors, the beach with the most clams available for harvest. Long Beach will be open for digging March 8-10, while Copalis and Mocrocks will be open March 9-10.

No digging will be allowed at any beach before noon.

Ayres said an extra evening of digging – March 8 – has been added to the original schedule at Long Beach, because diggers harvested fewer clams than expected there last month.

In planning a trip to the beach, all diggers should be aware that Daylight Saving Time starts March 10, Ayres said.

“If you forget to set your watch ahead, you could miss an hour of prime digging,” he said, noting that the best digging occurs an hour or two before low tide.

Evening low tides for the upcoming dig are as follows:

By law, clam diggers are limited to 15 razor clams per day, and are required to keep the first 15 clams they dig. Each digger’s clams must be kept in a separate container.

All diggers age 15 or older must have an applicable 2012-13 fishing license to harvest razor clams on any beach. Licenses, ranging from a three-day razor clam license to an annual combination fishing license, are available on WDFW’s website at https://fishhunt.dfw.wa.gov/ and from license vendors around the state. 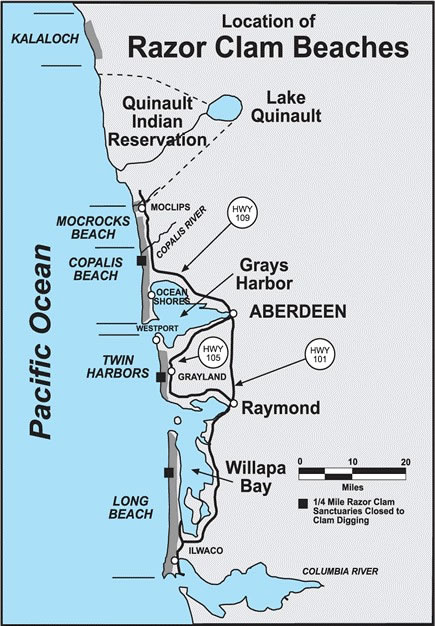 Information about the location of Washington’s razor clam beaches, as well as current and proposed digs, is available at http://wdfw.wa.gov/fishing/shellfish/razorclams/current.html.

The State Department of Fish and Wildlife is asking for the public’s help in finding who killed at least three bald eagles in Snohomish County.

Officials said four eagles were found floating in a small lake near Granite Falls last week. Investigators confirmed that three of them had been shot with a small-caliber rifle. It’s unclear how the fourth bald eagle died. The species is protected under both state and federal law. A nearly $4,000 reward is being offered for information about the person responsible for killing the eagles.