Secretary of the Interior Sally Jewell (left) and UW Dean of the College of the Environment Dr. Lisa Graumlich (right) hold a round table discussion at the University of Washington in Seattle with researchers and other program managers to discuss the impacts of Climate Change in the Pacific Northwest. Andrew Gobin/Tulalip News

Seattle – The United States Secretary of the Interior Sally Jewell, along with Dean of College of the Environment at University of Washington Dr. Lisa Graumlich, convened a meeting at the University of Washington (UW) in order to discuss climate change, the data we have already seen in the Pacific Northwest, and what the regional impacts are. Representatives from the United States Geological Survey (USGS), UW faculty, the National Parks Service, Department of Natural Resources (DNR), the North Cascades National Parks Complex, the Olympic National Park, and other organizations attended the February 4th meeting. Impacts on ecology, landscape, development and public planning were discussed, though for Native American Tribes, the implications are much more complex as they affect cultural identities. Although tribes’ interests are more deeply vested, collaboration was highlighted throughout the meeting as key to successfully combating climate change.

Dr. Gustavo Bisbal, Director of the USGS Northwest Climate Science Center, said, “{Tribes} have their finger on the pulse of the land. These communities don’t just worry about ‘oh well we can’t go snowboarding,’ or ‘I cannot go and water my carrots.’ There is a spiritual significance to the resources that they don’t see anymore. There is a danger of cultural erosion with things going away. ‘I can’t do this anymore. I cannot be…I cannot realize my tribal identity.’ That is huge, to understand the significance of how those resources are changing, and are really transforming cultures.”

For many years tribes, especially in Washington State, have led the charge in protecting natural resources. Stemming from the 1974 Boldt Decision, which protected tribal interests and rights to natural resources, tribal sovereignty was realized through the recognition of their authority to co-manage resources with state and federal entities. Today, although tribes remain at the forefront with their survival deeply vested in the preservation of natural resources, it is apparent that everyone has an interest in combating issues that come with climate change.

“I think one big lesson that nature, of course, taught us over time is there’s really no geographic or institution boundaries. When you look at the State of Washington, Department of Natural Resources owns the land, forest land, park land, tribal land, and they’re all impacted,” said Hedia Adelsman, policy analyst for the Department of Ecology and appointed proxy for the governor for the meeting. “Ultimately, how do we then work together to not have this fragmentation.”

These entities historically have worked individually, even in natural resource preservation efforts. DNR, for example, is currently developing a climate change adaptation plan, though it only affects DNR land. The boundaries on the land do nothing to contain environmental impacts. On Mount Rainier

Other entities get wrapped up in whether or not it is their responsibility to preserve natural resources or prepare for climate change.

“A climate catastrophe is not the time to have an identity crisis. From a National Parks Service perspective, I think there are still those many, many people within our population who think of national parks as zoos. Some of us realize the importance of national parks for the baseline information that they can provide regarding climate change. From a policy and legislative perspective, they look at specific species in parks, which a zoo-like mentality, as opposed to looking long range and thinking; well what if Roosevelt Elk actually move out of the park habitat, or what if they’re not doing so well. To what extreme would we go to maintain a population of Roosevelt Elk at the expense of keeping baseline data to inform climate change decisions,” said Sarah Creachbaum, Superintendent for the Olympic National Park.

Creachbaum demonstrated two roadblocks that need to change, one being the perspectives at the decision making level, and the second being the challenges in identity and questions of responsibility. The National Parks Service essentially is at the frontline, observing environmental changes on a daily basis. The potential data they stand to provide, in addition to what they do now, is overlooked because of these roadblocks. Creachbaum said they want to come to the table and be part of the team, but their significance has yet to be realized. That lack of vision in addition to oversight at the policy level creates a gap, consequentially hindering natural resource preservation.

Adelsman said, “We are just at the beginning of starting to look at it as a system. The part that I struggle the most with is we are recipient of the science, and we say we need to consider that in our planning policies, but what does that really mean?”

Climate change affects regions and regional systems beyond the natural environment, including the economy, public health, and population. For tribes, the effects will change tribal identity and culture if there are no longer traditional natural resources to have access to. At the end of the day, it is more than a tribal issue, more than a local or regional issue. In the Pacific Northwest, even speaking locally, climate change is an international challenge, as we share waters and mountains. Climate change impacts everyone and it will take a consorted, multi-national effort to plan for and prevent changes in the Pacific Northwest. 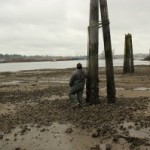 From the Department of Natural Resources:

The Washington State Department of Natural Resources (DNR), the Squaxin Island Tribe, the Port of Olympia, the South Puget Sound Salmon Enhancement Group (SPSSEG), and private landowners are joining together to clear toxic derelict pilings and other structures from much of the southern end of Budd Inlet in Olympia.

The work, which is funded by the 2012 Jobs Now Act, begins this week and continues through March 14. The project is expected to cost roughly $278,000.

The Squaxin Island Tribe’s involvement in the project began when they received three acres of tideland as a donation from a family estate. The tidelands included 224 pilings from a former industrial site.

“We saw this as an opportunity to restore these tidelands by taking out the pilings that are leaching pollutants into Budd Inlet,” said Andy Whitener, Natural Resources Director for the tribe. “There is a lot of work to be done in Budd Inlet to restore its ecological function. Getting these pilings out of here is a great start.”

By mid-March some 400 derelict pilings and 7,000 square-feet of abandoned docks and piers that represented the last reminders of a lower Budd Inlet shoreline once lined with lumber and plywood mills will be removed and shipped to the Roosevelt Landfill in Klickitat County.

It marks the latest step in a slow but steady transformation of West Bay Drive in Olympia from an industrial corridor to a collection of parks, office buildings and shoreline property undergoing hazardous waste cleanup and redevelopment.

The piling and dock removal project stretches across 1.2 miles of shoreline in lower Budd Inlet. It is spearheaded by the state Department of Natural Resources and also features four properties owned by the Port of Olympia, West Bay Reliable, the Delta Illahee Limited Partnership and the Squaxin Island Tribe.