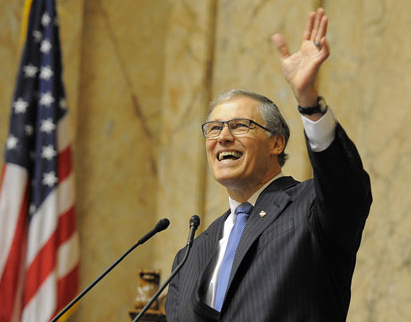 Washington Gov. Jay Inslee at the State of the State address in January. Flickr/Jay Inslee.

OLYMPIA — How much risk of cancer from eating fish is too much? Gov. Jay Inslee has privately advanced a proposal that would likely pass legal muster but which worries Indian tribes and environmentalists. It would allow a tenfold increase in allowable cancer risk under the law.

It’s either that, the governor has told a panel of his advisers, or the state will have to consider regulatory breaks for polluters that the state has not traditionally granted in the past.

For example: giving factories, municipal sewage treatment plants and others who dump pollution into waterways 20 years or perhaps even more to come into compliance with new toxic-waste limits.

Caught in crossfire between Indian tribes and business interests, Inslee stepped into the controversy last spring after his predecessor, Chris Gregoire, short-circuited plans by the state Ecology Department to make water pollution rules more protective of people who eat a lot of fish. Gregoire’s move came a day after the former governor met with a senior Boeing Co. executive who strongly objected to tighter restrictions on toxic pollution, as InvestigateWest was the first to report.

Inslee’s first step was to organize a panel of advisers, including business and tribal officials. It was in front of that group in February that the governor laid out the choices as he saw them, according to several people who attended the meeting.

Now Inslee is on the verge of handing down orders to the state Ecology Department on how to proceed. It’s a decision fraught with political tension because Inslee has allies in the tribes and in business.

“The governor came into this issue, inherited it, hearing both that this is going to kill business and hearing this is necessary to protect Washington citizens who are heavy fish consumers,” said Ted Sturdevant, who first pushed the tighter limits as director of Ecology and is now Inslee’s chief adviser on the issue. “He’s been looking for a path that does both — that protects people who eat a lot of fish and that doesn’t kill the economy.”

The U.S. Environmental Protection Agency has repeatedly told Washington that the state must fix its system for regulating water pollution under the federal Clean Water Act.

What needs fixing is the fish consumption rate: an official state estimate of how much fish people eat and a key part of Washington’s formula for deciding how much pollution is allowed. The more fish people consume, the more exposure they face to water-borne pollutants, and the less pollution can be discharged into waterways under the Clean Water Act.

The fish-consumption estimate Washington uses is based on a national study conducted in 1973 and 1974 in which people filled out three-day food diaries. According to that study, and in the current state calculations, Washingtonians eat less than half a pound of fish per month, about one serving. In reality, many eat more in a single meal. Starting in the 1990s, more-rigorous studies of Northwest Indian tribes found fish consumption rates of 30 pounds per month or more among the highest consumers in the Suquamish Tribe, for example, where even the average consumer eats 14 pounds a month. Other groups, such as sport fishers and immigrant communities, are also known to eat fish in excess of the state estimate.

Critics of Washington’s one-meal-per-month figure point to Oregon, which in 2011 adjusted its rate to 11 pounds per month, or roughly one fish meal per day, making it the strictest standard in the nation. That move was designed to protect 90 percent of people eating fish in the state to a one-in-1-million standard of increased lifetime risk of cancer.

Following Oregon’s lead, Sturdevant as director of Ecology in 2011 began a process to correct Washington’s fish-consumption estimate. Vigorous protests from business and influential members of the state Legislature failed to stop the rulemaking process by spring 2012. But when Boeing took its complaint all the way to the governor, Gregoire told Ecology to go back to the drawing board.

Tribes protested. After his election, Inslee personally stepped into the controversy, tapping a panel of prominent business, tribal and municipal officials to try to reach agreement on a path forward.

Ten months later, that hasn’t happened. And in the interim, environmentalists filed suit in federal court seeking to compel the federal EPA to force action by the state or take over the whole process

Businesses and local governments rightly point out that wastewater technology is not currently available to meet the strict water-quality standards that would result if Washington adopts a fish consumption rate as high as Oregon’s.

To environmentalists and Indian tribes, that’s not the point. They rightly point out that the Clean Water Act has often required industry and others under its regulation to set a standard to protect public health and rely on that standard to drive technological innovation. That way, at least eventually, even heavy fish consumers are protected, they argue.

At a meeting at the governor’s office in early February, according to several of those who attended, the governor laid out two options, both of which lessen the potential burden on polluters:

Boost the estimate of how much fish Washingtonians are eating, but alter another pivotal part of the formula used to set pollution limits: the additional cancer risk from eating fish that is considered acceptable. Traditionally, Ecology has set that at one additional cancer case for every 1 million people exposed to a given pollutant. That number could be set at one in 100,000 instead, Inslee suggested, and remain within legal bounds. EPA allows states to set the risk at either level, so long as even highly exposed groups such as Indian tribes face risks no greater than one additional cancer case from eating fish per 10,000 people.

Keep the traditional limit of one-in-1-million increased cancer risk, but take steps to help pollution dischargers. This could include giving them variances from the rules; allowing them years or even decades to reduce pollution; or other alternatives. Similar polluter-friendly steps were taken in Oregon but traditionally have not been used in Washington. This second option, Inslee adviser Sturdevant told InvestigateWest, would have to be paired with “creative solutions” that would further protect fish eaters, although such solutions have not yet been outlined.

The EPA’s Seattle-based Region 10 oversees the Ecology Department’s enforcement of the Clean Water Act. Region 10 Administrator Dennis McLerran refused to grant an interview to discuss EPA’s position or provide another spokesman for the agency.

But recently the agency repeated its position in a letter to the Washington Ecology Department, saying an “important part of a final rule is choosing a cancer risk level that provides risk protection for all Washington citizens, including those who eat higher amounts of fish.” If the state doesn’t come up with a rule by the end of the year, EPA plans to step in and do the job itself, the letter said. The suit the environmental groups filed in federal court seeks to force such action by EPA.

Meanwhile, a coalition of business interests, local governments and a labor organization endorsed increasing the allowable cancer risk. Expecting a one-in-1-million increased cancer risk is “unacceptable,” the group wrote in a letter to Inslee.

One signer was Maud Daudon, president and CEO of the Seattle Metropolitan Chamber of Commerce, who served on Inslee’s panel of advisers and attended the meetings where the governor discussed the issue. She told InvestigateWest even the one-in-100,000 cancer rate would lead to significantly tightened water-pollution standards.

By adopting that goal, she said, “you can get industry to invest in ways that will move the needle for human health.”

Business and local governments argue, too, that they are unfairly targeted by the Clean Water Act. Pollution from factories and sewage plants has already been ratcheted down substantially since the landmark legislation was adopted in 1972. Nowadays, quite a bit of pollution flowing into Washington waterways comes not from a sewage plant or factory, but rather from the foul mix that flows off streets, parking lots and other hard surfaces during rainstorms, carrying the detritus of our modern world, including three pollutants that have proved particularly difficult to clean up: PCBs, arsenic and mercury.

“It’s really concerning to me,” said Jim Peters of the Squaxin Island Tribe. “It seems like they have no problem having heavy fish consumers have a higher risk of getting cancer than other people.

“It’s just not something we can accept. Tribal members and my family do eat a lot of fish. It’s part of our lives and part of our culture and a staple of our diets. And we’d probably eat more fish if there were more around.”

Although Inslee has not yet said publicly how he will resolve the dispute, those involved in the discussions say it seems likely that he will find a way to allow polluters leeway on PCBs, mercury and arsenic. What form that might take remains unclear.

Kelly Susewind, a key adviser to Ecology Director Maia Bellon, argues that one case per 100,000 people “is very, very close to zero” cases, although he acknowledges that one in 1 million “is even closer” to zero.

He said the agency should be given credit for not simply focusing on protecting the average person.

One thing to consider is that the measure of increased cancer risk is based on 70 years of exposure to a given pollutant. Also keep in mind that Washington’s population is about 6.9 million people. So if the allowable cancer rate were to be set at one in 100,000 people instead of one in 1 million people, the difference would be roughly 62 extra cases of cancer over 70 years — if the assumptions are right. It could be more or it could be fewer.

One of Inslee’s advisers is Seattle attorney Rod Brown.

“What’s your social judgment about how much risk is acceptable for a carcinogen?” Brown asks. “It sounds like math, but it’s also a social judgment.”

InvestigateWest is a Seattle-based non-profit journalism organization focused on the environment, public health and government accountability in the Pacific Northwest.