A story of weight loss, self-esteem and learning who you are beyond the scale 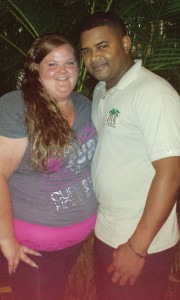 TULALIP – On January 17, of this year, Tulalip tribal member Jade Parks was in Mexico, following a major surgery, she was 350 pounds and a dress size 26. She was alone except for her best friend and had just started a journey that would alter her life drastically to reveal a woman she never knew existed.

Growing up, Jade was always larger than her peers. Shopping in plus size stores became regular as she entered adulthood. She didn’t shy away from life despite her larger size, she learned to accommodate it instead. Yet as her weight continued to increase, her usual bubbly personality began to shrink, eventually leading to depression after years of losing and gaining weight. Something had to change.

Parks sought help from her tribal council to pay for a surgical procedure to help her lose weight. Due to a policy that required her to be experiencing two major health issues as a result of her weight, she was denied. She weighed over 300 pounds and suffered high blood pressure and sleep apnea. These did not qualify.

Despite being denied the monetary help, Parks was determined to lose weight. Through diet, exercise and enrollment as an outpatient in treatment for food addiction, Parks lost 73 pounds in 9 months. But it didn’t last. Parks eventually gained back the pounds she lost, plus seven more.

“It was extremely depressing. I was really sad and I didn’t know what I was going to do. You wake up in the morning not wanting to eat bad things, wanting to make good choices, wanting to work out and then you look in the mirror, and you just feel like a failure because of your weight. You think, how could I let myself get like this,” said Parks, about a typical day for her.

“It is hard. For plus size people, when you walk into the room everyone knows your issue. It is not something you can hide. I can’t hide my addiction. I can’t hide what my issue is, because it is the first thing you see when you see me, because it is my weight. A lot of times drug addicts can hide their substance abuse, people do not know that they abuse drugs. For us, as soon as we walk into a room, every single person is going to know and that makes it hard. It came basically down to: I can’t live like this anymore. I can’t live at being 350 pounds. I decided to pay for the weight loss surgery on my own, so I went to Mexico because it is cheaper.”

Although risks can be associated with medical treatment in other countries, Parks’ research led her to a private hospital and a surgical staff that she was comfortable with and she made plans to travel.

“I have never had surgery in my life before. I was worried about it, but I was more worried about not ever being able to have kids because of my weight,” said Parks, who developed polycystic ovary syndrome as a result of her weight, which caused her to stop menstruating.

Parks had a sleeve gastrectomy, which involves a portion of the stomach being separated and removed from the body. According to the Mayo Clinic, the “remaining section is formed into a tube-like structure. The smaller stomach cannot hold as much food. It also produces less of the appetite-regulating hormone ghrelin, which may lessen your desire to eat. However, sleeve gastrectomy does not affect absorption of calories and nutrients in the intestines.” This type of surgery, unlike other weight loss surgeries such as the gastric banding, is irreversible and still considered a relatively new procedure in America, meaning its long-term effects are still being evaluated. 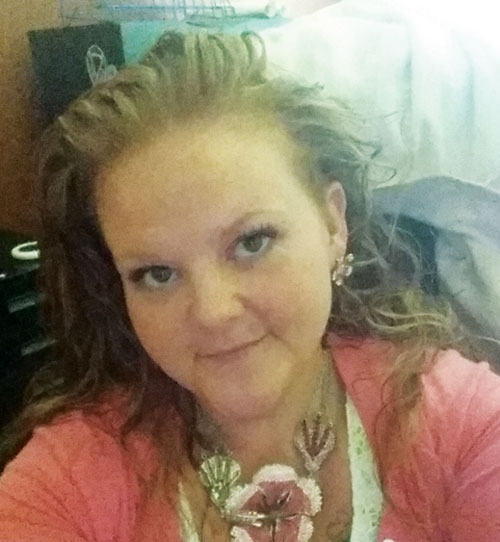 “People think that weight loss surgery is the easy way out, but I am here to say that it is not an easy way out. It is extremely hard, because you still battle cravings and wanting foods. I can eat about four bites of food and I am full,” said Parks, who had 80 percent of her stomach removed during the surgery and can only take quarter sized bites while 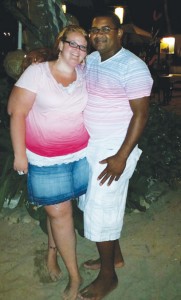 After her sleeve gastrectomy surgery in January 2014, which removed 80 percent of her stomach, Jade Park, with fiancé Leonardo Carela, has lost 131 pounds and wears a 14 pant size, at the time of the article.

“There are a lot of people who get weight loss surgery and abuse it. They stretch out their stomachs and gain the weight back. I have followed the diet from the doctor very strictly. For instance, you cannot eat and drink at the same time. You have to do it within half an hour of each other, and that’s because there is not enough room. If you do, it will stretch out your stomach,” explains Parks, who also cannot have carbonated beverages and will need to maintain the strict diet for the rest of her life.

Due to the diet’s strict portion control, Parks takes a regimen of vitamins to ensure she receives the proper amount of nutrients for her body, including choosing portion options that include the natural nutrients in them.

“You have to be careful because you are getting rid of one of your addictions,” said Parks, who was on a liquid diet the first month following her surgery. “That first month I was a wreck. I couldn’t smoke. I couldn’t workout and I couldn’t eat. Those are my vices. I did a lot of crying, a lot of sitting with my feelings and having to just deal with life. At the same time, it helped to prepare me for the rest of my weight loss journey, because I can’t continue to use food as my coping mechanism. It helped me learn to sit with my feelings and learn that feeling emotions is not going to kill you, and that you have to let yourself feel emotions.”

“My biggest fear about getting the weight loss surgery was that I would get the surgery and then I would regret it. There is nothing that I have experienced through this journey that has ever made me regret my surgery. It truly is the best decision I have made for myself,” said Parks, who has lost a total of 131 pounds at the time of this article.

Although weight loss surgery is not recommended for everyone, or may not be successful for everyone who has it, Parks explains that the nine months following her surgery has taught her more about herself than she ever expected.

“I have always known I am a strong woman, but now I truly believe it. To know that so many people get weight loss surgery and it just doesn’t work for them, it makes me feel stronger and gives me such a sense of pride to know have come this far. That I am able to follow the rules and stick to what I am supposed to and not throw up, is a huge thing. Now I don’t need a seat belt extender on an airplane. When I park really close to another car, I can squeeze out without my car door hitting the other car. I can fit into chairs. I can cross my legs. I have had to move my seat up in my car. I have been able to shop in non-plus size stores. Normal jewelry fits me,” said Parks about the little things she enjoys about her weight loss. 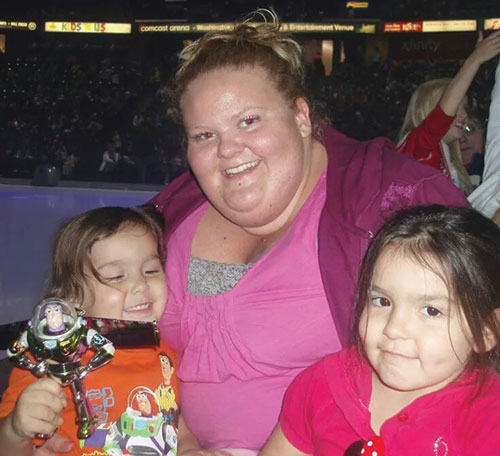 “You really have to know that this is something that you want and you are willing to make the sacrifices it takes to get it done, and do it the right way. A lot of people think they are ready because they are just tired of being big for so long, but it is a hard road. It is a good idea to be in therapy or something to help you through the journey, because when you can no longer use food as your coping mechanism, you need to be able to work through your emotions and whatever life is throwing at you. In the end it is worth it. I wouldn’t take it back for anything,” said Parks, who plans to continue her doctors’ diet plan, working out and living a healthier life.