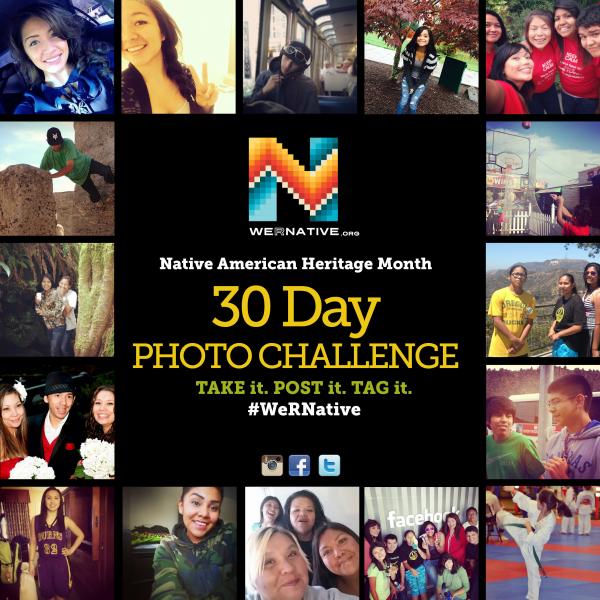 WeRNative
Native youth across the nation are invited to show the world what it means to be Native by taking the WeRNative Photo Challenge using the #WeRNative hashtag in social media, to raise awareness of Native American Heritage.

Native youth across the nation are invited to show the world what it means to be Native by taking the WeRNative Photo Challenge using the #WeRNative hashtag in social media, to raise awareness of Native American Heritage.

We R Native, a non-profit multimedia health resource for Native teens and youth teamed with Native-owned marketing company, Redbridge Inc., to host the #WeRNative Photo Challenge throughout November as a celebration of Native American Heritage Month.

We R Native is the only comprehensive health resource for Native youth, designed by Native youth, providing content and stories about the topics that matter most to them: social, emotional, physical, sexual, and spiritual health. The organization encourages Native youth to take an active role in their own health and well-being.

“Our tribal youth face a lot of challenges that leave them feeling like they’re facing them alone,” Stephanie Craig from We R Native said in announcing the event. “In celebration of Native American Heritage Month, Native youth will unite to show the world, and each other, they’re not alone and what it means to be Native by using the hashtag #WeRNative.”

On average, the We R Native project, funded by the Indian Health Service, reaches over 31,000 users per week through its various media channels.

“If the total Native American population is 1.6 percent of the nation, then Native youth are .5 percent. It’s easy to see why they feel alone in the challenges they’re facing,” Shannon Hulbert, CEO of Redbridge said in the statement.

“Imagine how empowering it would be if they started to see a number of other tribal youth across the nation saying #WeRNative,” Hulbert said. “The Challenge could serve as a platform for raising awareness, not just for who’s struggling and how, but also for who’s facing the challenges in ways they hadn’t thought about, and who’s smiling through it all.”

In the 2010 Census, 5.2 million people reported they were American Indian or Alaska Native (AI/AN), with approximately one-third under the age of 18. AI/AN youth are disproportionally impacted by a variety of adolescent health concerns, including high teen pregnancy rates, drug and alcohol use, and depression and suicide, which heighten their need for programs that align to their unique culture and social context.

Tribes and tribal organizations throughout the U.S. are working to develop and implement evidence-based, culturally-appropriate health interventions.