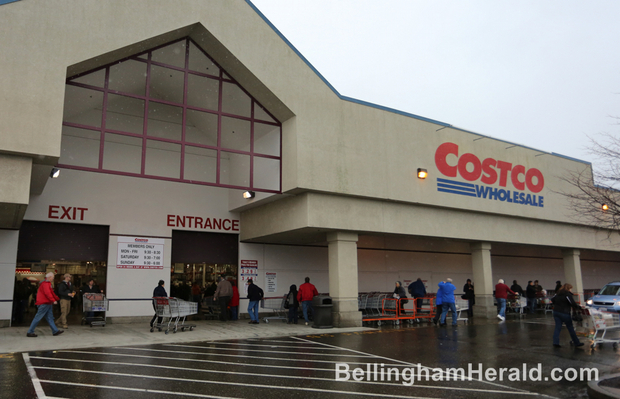 WASHINGTON – Restore America’s Estuaries has released the findings of a groundbreaking study that confirms the climate mitigation benefits of restoring tidal wetland habitat in the Snohomish Estuary, located within the nation’s second largest estuary: Puget Sound. The study, the first of its kind, finds major climate mitigation benefits from wetland restoration and provides a much needed approach for assessing carbon fluxes for historic drained and future restored wetlands which can now be transferred and applied to other geographies.

The Study, “Coastal Blue Carbon Opportunity Assessment for Snohomish Estuary: The Climate Benefits of Estuary Restoration” finds that currently planned and in-construction restoration projects in the Snohomish estuary will result in at least 2.55 million tons of CO2 sequestered from the atmosphere over the next 100-years.   This is equivalent to the 1-year emissions for 500,000 average passenger cars. If plans expanded to fully restore the Snohomish estuary, the sequestration potential jumps to 8.8 million tons of CO2   or, in other terms, equal to the 1-year emissions of about 1.7 million passenger cars.

“The study is the first to provide a science-based assessment of climate benefits from restoration at scale. The findings are clear: restoring coastal wetlands must be recognized for their ability to mitigate climate change,” said Jeff Benoit, President and CEO of Restore America’s Estuaries. “The report adds to our list of science-based reasons why restoration is so critical.”
“Healthy estuaries mean healthy economies,” Representative Rick Larsen, WA-02, said. “I have long advocated to restore our estuaries because of the critical role they play in supporting recovery of fisheries. This new study shows that estuary restoration can play a big role in countering climate change too.”
“It is very fitting that we are implementing some of the world’s leading Blue Carbon research here in Puget Sound,” said Steve Dubiel, Executive Director of EarthCorps. “We have always known that wetlands are a kind of breadbasket, thanks to the salmon and shellfish they support. Now we are learning that they are also a carbon sponge.”
In addition to the climate benefits outlined by the study, healthy and restored estuaries act as spawning grounds and nurseries for commercially and recreationally important fish and shellfish species, provide storm buffers for coastal communities, filter pollutants, and provide habitat for numerous species of fish and wildlife, as well as recreational opportunities for hundreds of millions of Americans annually.
“This study illustrates the contribution of tidal wetland restoration to reduce global warming,” said Dr. Steve Crooks, Climate Change Program Manager for Environmental Science Associates and lead author on the study. “From this analysis we find wetlands restoration in Puget Sound likely to be highly resilient to sea level rise while at the same time continuing to sequester carbon within organic soils. Similar opportunities will exist in other coastal regions of the U.S.”
“This report is a call to action. We need to invest more substantially in coastal restoration nationwide and in science to increase our understanding of the climate benefits which accrue from coastal restoration and protection efforts,” said Emmett-Mattox, Senior Director for Restore America’s Estuaries and co-author on the study. “Sea-level rise will only make restoration more difficult and costly in the future. The time for progress is now.”
This report was a collaborative effort of Restore America’s Estuaries, Environmental Science Associates (ESA), EarthCorps, and Western Washington University. Lead funding was provided by NOAA’s Office of Habitat Conservation and additional support was provided by The Boeing Company and the Wildlife Forever Fund.
“Coastal Blue Carbon Opportunity Assessment for Snohomish Estuary: The Climate Benefits of Estuary Restoration” full report is available here, and the Executive Summary is available here. 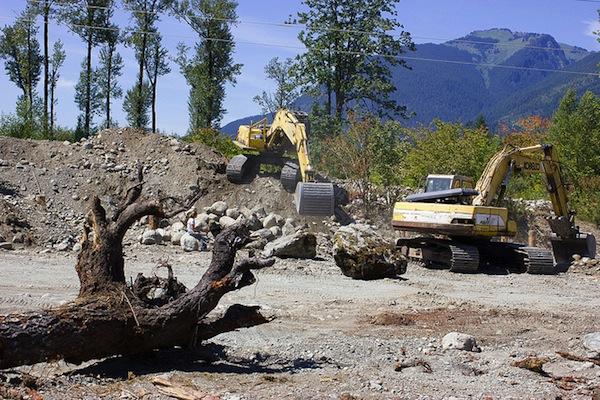 Northwest Indian Fisheries Commission
A dike is removed from Illabot Creek to restore its historic channel, one of several initiatives under way by Northwest tribes to bring back salmon habitat. This effort is by the Swinomish and Sauk-Suiattle tribes under the auspices of the Skagit River System Cooperative.

As Indigenous Peoples of the Northwest work to restore salmon habitat and with it lost culture and treaty rights, they are grappling with the reality that continued development is undoing their efforts as they go. In September 2012 the Northwest Indian Fisheries Commission released a report, “State of Our Watersheds,” documenting the results of local and state planning that have been in conflict with salmon habitat-recovery goals. Below are the principle findings as to what salmon habitat faces.

1. Estuaries are losing functional habitat because of population increases in lower portions of watersheds. “In the Suquamish Tribe’s area of concern, there has been a 39 percent loss of vegetated estuarine wetland area and a 23 percent loss of natural shoreline habitats, particularly small ‘pocket’ estuaries,” the report states. “Moreover, there are now 18 miles of bulkheads, fill and docks armoring the shoreline and degrading near-shore salmon habitat.”

All told, some 40 percent of Puget Sound shorelines have some type of shoreline modification, with 27 percent of the shoreline armored.

2. Rapidly increasing permit-exempt wells threaten water for fish. Since 1980, there has been an 81 percent increase in the number of new wells being drilled per 100 new Puget Sound residents moving into the area. The number of exempt wells in the Skagit and Samish watersheds since 1980 has increased by 611 percent, from an estimated 1,080 exempt wells to approximately 7,232.

“When more water is extracted from an aquifer than is being recharged, aquifer volume is reduced and the natural outflow from the aquifer decreases,” the report states. “This reduces the amount of fresh water available to lakes, wetlands, streams and the Puget Sound nearshore, which can harm salmon at all stages of their life cycle.”

3. Degraded nearshore habitat is unable to support forage fish. “In the Port Gamble S’Klallam Tribe’s focus area, according to studies since the 1970s, herring stocks have decreased from a status of healthy to depressed,” the report states. “In Port Gamble and Quilcene bays, which contain two of the largest herring stocks in Puget Sound, approximately 51 percent of spawning areas inventoried by [the] Port Gamble [S’Klallam] Tribe have been either modified or armored.”

4. Timber harvest has removed vast amounts of forest cover throughout all watersheds. In the Stillaguamish watershed, only 23 percent of the 1,777 acres of riparian area currently have any forest cover. In the Snohomish River basin, the Salmon Conservation Plan recommends that 150-foot buffers on both sides of fish-bearing streams be at least 65 percent forested. In 2006, those buffers were just 41 percent forested, with no gain since 1992 and little increase since that time.

6. Barriers cut off vast amounts of fish habitat. Despite extensive restoration efforts, many fish passage barriers, such as culverts, tide gates and levees still block salmon from accessing many stream miles of habitat. In the Quileute management area, culverts fully or partially block more than 168 miles of stream habitat. Most of these culverts are located on private forestlands. Culverts in the Chehalis basin block or impede salmon access to more than 1,500 miles of habitat.

7. Agricultural practices negatively impact floodplains and freshwater wetlands. Diking, draining and removing trees have resulted in a loss of stream buffers, stream channels and wetlands, and resulted in increased sediment and polluted runoff from agricultural activities.

In 1880, the Nooksack basin contained 4,754 acres of wetland to 741 acres of stream channel. By 1938, nearly 4,500 acres (95 percent) of off-channel wetland area had been cleared, drained and converted to agriculture. As of 1998, the lower mainstem retained less than 10 percent of its historical wetlands.

As of 2006, riparian areas of the Skagit River delta region are 83 percent impaired. Of that amount, only 12 percent are developed; the remaining 71 percent of impaired lands support crops and pasture.

10. Loss of forest cover continues. From 1988-2004, Western Washington forestlands have declined by 25 percent—a loss of 936,000 acres of state and private forestland converted to other uses. Recent research from the University of Washington indicates that nearly one million more acres of private forestland are threatened with conversion.

The Skagit River System Cooperative—operated by the governments of the Sauk-Suiattle Tribe and the Swinomish Tribe, in partnership with the Bureau of Indian Affairs, U.S. Forest Service, Northwest Indian Fisheries Commission, Environmental Protection Agency, Pacific Salmon Commission and the state—recommends no new construction of riprap without mitigation. However, since 1998, at least one mile of riprap has been added to the existing 14 miles of riprap shoreline along the middle Skagit River.

“Shoreline armoring contributes to river channel degradation by impeding natural bank erosion and river meandering, and disconnecting terrestrial and aquatic ecosystems, directly impacting salmon habitat,” according to the NWIFC’s report, “State of Our Watersheds.” “Young juvenile chinook have been shown to use river banks modified with riprap at densities five times lower than natural banks.”