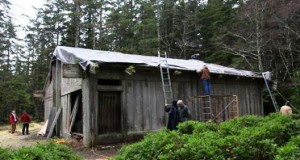 The roof of Kasaan’s Chief Son-i-Hat House, also known as the Whale House, is covered by a tarp during repair work. (Organized Village of Kasaan.)

A nearly-half-million-dollar grant will speed restoration of Alaska’s oldest Haida longhouse. The structure was first built 130 years ago.

Haida Chief Son-i-Hat built the original longhouse in the 1880s at the village of Kasaan. It’s on the eastern side of Southeast’s Prince of Wales Island, about 30 miles northwest of Ketchikan.

It was called Naay I’waans, The Great House. Many know it as The Whale House, for some of the carvings inside.

It deteriorated, as wooden buildings in the rain forest do. The Civilian Conservation Corps, a depression-era employment program, rebuilt it in the late 1930s. 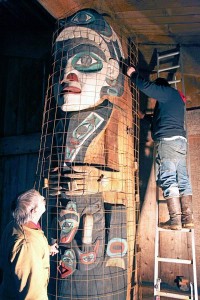 “It’s a matter of our cultural revitalization, showing that we’re still here and part of these lands,” says Richard Peterson, president of the Tribal Council for the Organized Village of Kasaan.

The tribal government is partnering with the Native village corporation Kavilco, and its cultural arm, the Kasaan Haida Heritage Foundation.

“A lot of the building is still in really good condition. Some of the supports are what’s failing. I think we’re fortunate enough that we don’t need a total reconstruction, so we want to maintain as much as we can,” Peterson says.

Read more about the effort.

An analysis by Juneau-based MRV Architects estimated full repairs would cost more than $2 million. A scaled-back plan totaled about $1.4 million. It listed several phases to be completed as funds came in.

And they have. In late November, the Anchorage-based Rasmuson Foundation awarded the project $450,000. Peterson says that, plus funds from the tribal government and its partners, is about enough to complete the work.

“So right now, we’re milling up the logs and they’re going to hand-adz all of the timbers. And we’re just going in and starting to secure up some of the corners that are dropping down. It’s been a really exciting project,” Peterson says.

The effort to stabilize the longhouse has been underway for around two years. But it picked up speed last summer.

The lead carver is Stormy Hamar, who is working with apprentices Eric Hamar, his son, and Harley Bell-Holter. Others volunteer.

Peterson says it’s an all-ages effort.“The great part is these young kids that are getting involved. And it’s across the lines. Native, non-Native, it doesn’t matter. There’s been a real interest by the youth there,” Peterson says.

Work continues through the winter. Peterson says the focus now is repairing or replacing structural elements so the longhouse doesn’t collapse.

The Whale House is already attracting attention. Independent travelers drive the 17-mile dirt road that starts near Thorne Bay. And Sitka-based Alaska Dream Cruises also stops in Kasaan, where the house is on the list of sights to see.

“Because it’s off-site, you’re not going to see any modern technology. There’s no cars driving by. You can really see how our people lived 200 years ago and experience that and look at those totems in a natural setting,” Peterson says. “It wasn’t put there for a park. This is how it was. And I think people really appreciate that.”

Without too many surprises, Peterson hopes work can be completed in around two years.

Then, he says, the tribe will host a celebration like the one Wrangell leaders put on last year when they finished the Chief Shakes Tribal House. 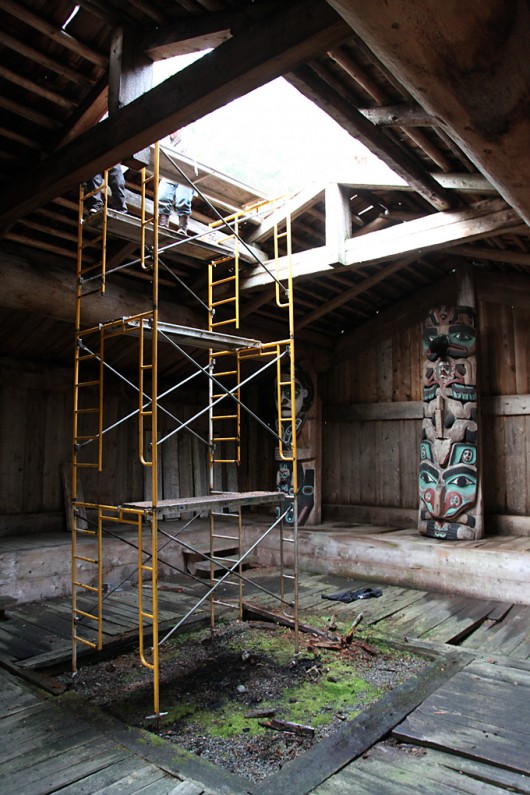 Scaffolding allows repairs to the Kasaan Whale House smokehole, which was damaged by rot. (Organized Village of Kasaan.)