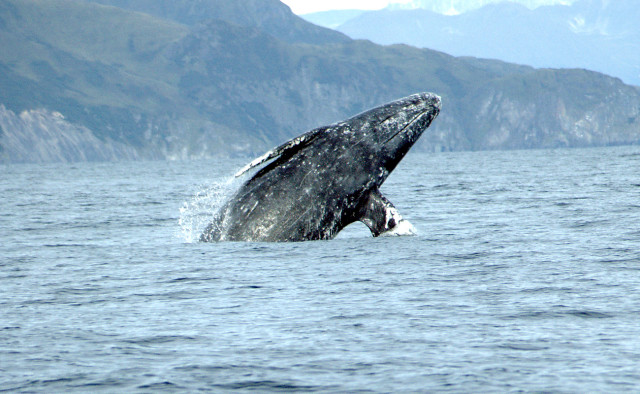 A gray whale breaching in the Pacific Ocean.
Courtesey of NOAA

The Makah tribe drew international criticism from animal rights groups in 1999 when it hunted a gray whale off Washington’s Olympic Peninsula. It was the tribe’s first whale hunt in more than 70 years.

The Makah have cited the ceremonial and subsistence nature of whale hunting, which it negotiated as a right preserved under its 1855 treaty with the U.S. government.

On their website the Makah tribe says whaling and whales are central to their culture.

“The event of a whale hunt requires rituals and ceremonies which are deeply spiritual. Makah whaling (is) the subject and inspiration of Tribal songs, dances, designs, and basketry.” the tribe says. “For the Makah Tribe, whale hunting provides a purpose and a discipline which benefits their entire community.”

NOAA Fisheries has proposed several options. One would allow the tribe to take up to five whales per year. Another would continue a prohibition against hunting gray whales.

“This is the first step in a public process of considering this request that could eventually lead to authorization for the tribe to hunt gray whales,” said Donna Darm, associate deputy regional administrator for NOAA Fisheries’ West Coast Region. “This is the public’s opportunity to look at the alternatives we’ve developed, and let us know if we have fully and completely analyzed the impacts.”

The draft analysis and additional information is available online. The public can submit comments over the next 90 days.