Protestors continue to rally against alcohol sales in Whiteclay, with the situation escalating last week.

Incidents began on Labor Day when protestors marched into the small town just south of the South Dakota state line.

“That day, basically, they were pretty calm, except they went to some of the beer stores and squirted some substance in to the locks. It appeared to be some kind of glue,” said Sheridan County Sheriff Terry Robbins. Store owners had to replace the locks.

The next day, authorities and protestors confronted each other again during weekly beer deliveries by Budweiser.

The protestors hid behind a building on the South Dakota side of the border until the trucks arrived and then attempted to gain access to the beer stores, engaging in confrontations with authorities, Robbins said. A female individual also allegedly spray painted a Whiteclay building. As authorities tried to arrest her, other protestors began shoving, hitting and spitting on the officers, which included Robbins, one of his deputies and two Nebraska State Patrol troopers. Robbins and the NSP troopers each requested additional help from their respective agencies.

The protestors eventually moved back in to South Dakota. An NSP report indicated that there they set up four cars across the road and refused to allow traffic entry to South Dakota.

The Budweiser delivery was halted Sept. 3, and the trucks told to “back out of town” until the matter was under control, Robbins said. Delivery was never completed that day, but all three distributors that serve the town were able to make deliveries without issue on Thursday. Budweiser also visited Whiteclay again this week without problems.

“The sad part about this is that very few of these people (the protestors) actually live in Shannon County, and very few are tribal members,” Robbins said. Many of the protestors are from other areas of the country, and many do not appear to be Native American, he added.

Watch the on scene report here

Another beer delivery truck has been attacked by anti-alcohol activists in Whiteclay.

Lieutenant Lance Rogers with the Nebraska State Patrol says the investigation has been turned over to the federal Bureau of Indian Affairs because the altercation crossed state lines.

The plastic pellets were shot at the beer truck in the Nebraskan town of Whiteclay from the ‘Zero Tolerance’ camp on the South Dakotan border.

The small town of Whiteclay has been the center of many as anti-alcohol protests, where activists say they want to keep alcohol off of the Pine Ridge Indian reservation. 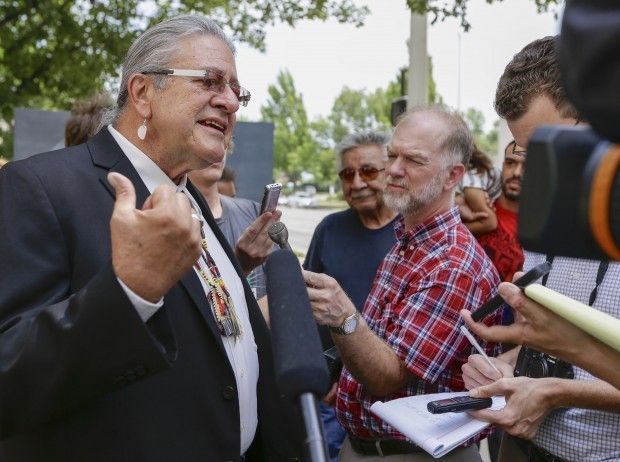 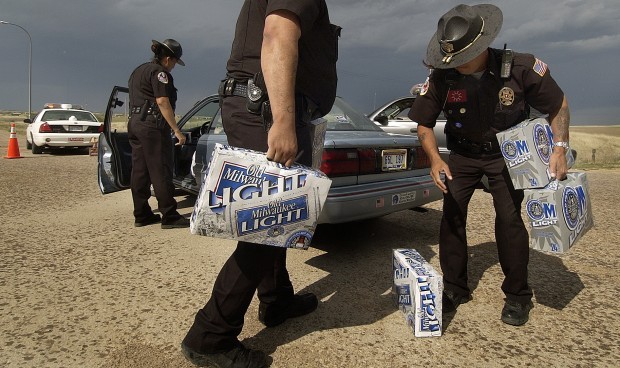 The Oglala Sioux tribal council voted Tuesday night to allow the tribe’s members to decide whether to legalize alcohol on the tribe’s South Dakota reservation.

“Let’s hear the voice of the people,” said council member Robin Tapio during the council’s meeting in Oglala, S.D.

Tribal President Bryan Brewer said he doesn’t support legalizing alcohol on the reservation, at least until the tribe develops a plan to address the likely increase in crime that would occur after legalization.

“That alcohol that’s coming on the reservation is killing our children, killing our people,” he said.

The vote to allow the tribe’s members to decide whether to legalize alcohol is closely intertwined with efforts to stop the flow of beer from the Nebraska village of Whiteclay, which is about a mile south of Pine Ridge, the tribe’s largest village.

Last year, four beer stores in Whiteclay sold the equivalent of 3.9 million 12-ounce cans of beer, according to the Nebraska Liquor Control Commission.

The tribe’s reservation, about the size of Connecticut, has struggled with high alcoholism rates for generations, though alcohol has been banned there since 1832. The Pine Ridge Indian Reservation makes up all of Shannon County, S.D. — the third poorest county in America, according to the U.S. Census.

Pine Ridge legalized alcohol in 1970 but restored the ban two months later, and an attempt to allow it in 2004 died after a public outcry.

A date for the Oglala Sioux Tribe’s members to decide whether to end the alcohol ban hasn’t been decided.

Brewer said he is planning to visit Lincoln soon to talk to Gov. Dave Heineman and other state officials about ways the state of Nebraska can address alcohol sales in Whiteclay. On Tuesday, he told his tribe’s council that he plans to protest Whiteclay alcohol sales on Monday morning and invited council members to join him.

“If we close up Whiteclay, it’s not going to stop the liquor on our reservation,” he said. “But we’re going to send a message to our young people: We do not want this.”

“It’s going to peak but then it’s going to come down once our people get educated about alcohol,” he said. “The people have to have a voice.”

“We have so many strong sober relatives that the only option is to continue to heal,” stated activist Olowan Martinez. “We no longer hide our spirituality, we no longer walk in shame of who we are. An escape from the slavery of alcohol is now occurring and soon the mind of the Oglala Lakota will also be liberated.”

Eyewitness reports state a Round Dance celebration for Liberation Day 2013 (in recognition of the 1973 Wounded Knee Occupation) turned into a showdown between Nebraska state troopers and Native Oglala Lakota activists working to end destructive alcohol use when Nebraska State troopers walked onto Pine Ridge sovereign land. They warned Bryan Brewer Sr. , Oglala Sioux Tribal President, that if he stepped into Nebraska he would be charged with trespassing.

A state trooper performed an alcohol Breathalyzer test on Whiteclay Nebraska Sheriff Terry Robbins due to his behavior and results were not made public. Over a hundred Oglala Lakota marched into the town of Whiteclay forcing the state troopers to withdraw from the area. Tribal President Bryan Brewer Sr. stated that “…on Friday March 1st, activists will return with five times as many people to shut down Whiteclay.”

Where:  Border of Pine Ridge South Dakota and Whiteclay Nebraska

Why: To stop the illegal alcohol activity at Whiteclay, Nebraska such as: